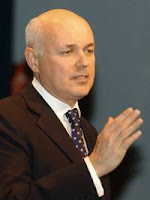 Iain Duncan Smith, hitherto a tragi-comic figure in Tory politics with a dubious record on loyalty to his leadership, is redeeming himself by good works. His Social Justice Commission’s report last year highlighted a number of uncomfortable truths about the consequences, and some of the causes, of the breakdown in family life, with the statistics to go with it. Plus blood-curdling tales of genuinely feral children (– to hell with Blair’s metaphorical usage about the media -) living in squats with no family beyond the street-gang, a new phenomenon in .

Effectively, he is becoming the Conservative Party’s Frank Field (this is intended as a sincere compliment), who himself last week observed:

“In 2006, a lone parent with two children under 11, working 16 hours a week on the minimum wage, gained a total net income of £487 a week, largely due to tax credits. In order to attain the same weekly income, an equivalent two parent household needed to work 116 hours a week - an extraordinary 100 hours more than the single parent."

IDS is a man with a mission, investigating and proselytizing vigorously in urban areas that many Conservatives shun. This week he was lending support to laudable Tory efforts to make headway in New Addington, one of the hardest areas (in more ways than one) for Conservatives in God’s Borough of Croydon.

The balding one’s recommendations are due next month and it will be interesting to see whether Cameron can rise to the rather urgent challenge. We know McBroon cannot or will not – and we live with the baleful consequences of his decade of failure.

Brown never defends the cock up that is tax credits he uses his minions instead.

I wonder how he will manage to hide when P.M

The E.U and the Barnett formula at last are issues alive in the public mind!

Major, Hague, Duncan-Smith and Howard, for all their faults, are each one of them better men than Blair.

Tax credits is utter ludicrous and results in people working the minimum to gain the maximum, but think of all those single parent votes....

Major, Hague, Duncan-Smith and Howard, for all their faults, are each one of them better men than Blair.

And Cameron...who is turning into a Blue Bliar and making policy on media results.

I wonder what happens to these single parents with 2 children under eleven when the children get over eleven and - eventually over 18? Do they just sign on for ever or claim to be disabled?

Ken - yes, Alex Salmond seems to have a cunning plan to bait the English into separating from Scotland (since the Scots won't vote for it) & hope for EU money by way of replacement

When I screwed up on the benefits front
I didnae wish to look a ****
So I pushed Primarolo oot in front
Because I have nae scuples!

dearieme - yes, and compared to McBroon we may soon be nostalgic for Blair

Shot - I'm still in the let's see what Cameron's got camp: but his response to the IDS recommendations will be a(nother) test.

As regards votes, clearly the client-base is huge and growing - but does it vote ? or, indeed, might it bite the hand that feeds ? They may assume - & perhaps with some justification - that no party will dare switch off their life-support.

Mutt - many of us are all too ignorant on how it "works" in detail, but "work" it clearly does - if you see what I mean

I think you're right about IDS - he does appear to be a thoroughly decent man, too decent to effectively run a party.