The Stuff of Champions 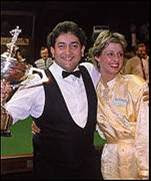 For younger readers, this is snooker player Joe Johnson who won the World Championship in 1986.

Though a splendid fellow, in his time as World Champion he embarrassed himself consistently on the green baize, winning nothing all year.

Yet despite this sustained run of miserable form, at the next World Championships he made it through to a second successive final.

Remind you of anything ?

We must hope the parallels end there . . .

Did England win yet?

No they did not , it was a frustrating game in which we never played badly but never really got going . In truth we didnt get the rub of the green but we did nothing earn the wim being unable to exert sustained pressurre.

On the plus side it was a tremendous achievement oget there and we have discovered some great Players . Number two in the world ....could be worse .

Tait was superb
Sheridan surely the dominant prop for the next decade . Ciorrie better than he has been for a while and Ipkiss looks a good prospect. If Wilkinson gets back to his best its a team good enough to beat most.

I am with N. A very creditable performance and the luck was just not there....if that try had been a try etc..
oh well, 4 years seems to come around much more quickly these days!