Nothern Rock; The end of the beginning 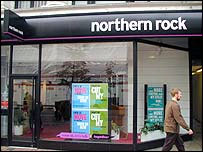 John Redwood has an excellent post on the current NT situation. Rather than repeat the details I will focus on what I think will happen:

1. The Virgin bid will fail unless the government roll over and write of billions of government money to fund the bid.
2. Assuming there can be no bid for the whole company, Venture capitalists will be asked to buy bits of the mortgaged book one piece at a time. At this time NR will have to have its shares suspended and be to all intents and purposes nationalised.
3. This will then reveal the scale of the sub-prime crisis at the bank; which may or may not be huge.
4. This will string out the process for another few months so that the Government can try and hope everyone forgets what a mess has been made.
5. The Governor of the Bank of England will not get another 5 years and the government will try and spin the blame onto him for the mess.
6. The asset sales will not recover enough money to pay the BoE loans and so there will be some material loss.
7. Many jobs will be lost and the mud will stick, probably causing the Chancellor not to resign but perhaps to be moved on in a re-shuffle in the Spring.

Overall given the above scenario, there is quite a large incentive here to fund the Virgin bid by waiving some of the debt interest payments purely for political purposes. We will know next week which way this is to go...probably too late to short NR shares now anyway!
Posted by CityUnslicker

But surprisingly not too late to bet on the Aussies. William Hill are still offering 8/15 on an Aussie victory - better than the 3/10 it started at!

I had a counter-sentiment bet on Russia to beat Israel...glad I lost my £5!

I have put in a offer for Northern Rock - Reckon its worth about a fiver...

Good luck with that Mutley. You neve know, you may win!

"The end of the beginning"?

"This was certainly not their finest hour" is all I can say.