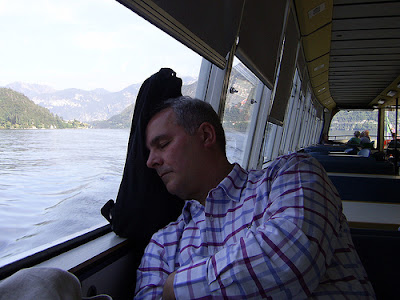 Now it is not often that Iain Dale beats us to a profound statement about the economy and interest rates...but he did this week.

Iain asked the question of what is the real interest rate. This is indeed a hoary old topic, old enough to have been my first decent post on this blog.

The fact is that the Labour government had to change the old RPIX rate to the Euro standard CPI rate as ordered by our European masters. This has helped us in early years of the naughties to be able to lower interest rates and stave off a real dot-com bust. However this fuelled an asset bubble, experienced by most people in the form of housing and a huge increase in mortgage debt. It has also allowed banks to release lots of money into the economic system in a bid to maintain or grow their returns in a low interest environment.

These chickens are coming home to roost in 2008 and the Government may well be make matters worse by persisting in a flawed inflation measure.

When the Bank of England meets tomorrow it will see a set of figures suggesting we have a low interest rate and decreasing economic activity. Just as Alistair Darling effectively asked for in his press conference on Monday, the MPC committee will likely vote to cut rates.

This will be a personal relief, given my indebted mortgage status and its help to drive the gold price higher for my investments....or will it?

Food prices according to the ONS are 10% up on a year ago, Npower, provider of leccy and gas to chez Slicker, have just put up prices 27%. Hmmm...seems like quite high inflation to me...almost as if corporates feel they have strong pricing power. Now to keep a lid on this the idea is generally that a government reduces the flow of money to try and encourage saving over spending, which in turn forces retailers to lower prices to drive sales (as is happening on the high street, but not elsewhere in the economy). Yes there are other drivers and reasons, but I don't want to bore forever here...

We are caught in a vicious trap of rising prices in many areas which will drive inflation - out current CPI measure discounts big chunks of this and relies on a near random and politically influenced basket of goods, not really very clever stuff in 2007 in a world of super computers on people's desktops. The ONS has admitted its data could be better last year. But headline inflation is low and Brown and Badger are hardly going to advocate a change to make it reflect its true rate!

So the Bank of England may well vote for a cut in rates which may or may not be a good idea; the issue I have is that it is working on a false mandate from Government, which belies the idea that it is independent at all.

The rise in food prices is very obvious to me. My MEP has been telling me for a while that it is the end of cheap foods as we have known, rising wheat prices will continue. And when food security and drought stress becomes an issue that directly affects our lives, food prices will rise even more astronomically. The worst is yet to come.

This could be seen as good news for the Tories because it means, effectively, that the electorate will see the true state of the economy years before an election, and that can only help their cause.

Brown had his chance at gaining a mandate and bottled out.

The media are looking at interest rates and also the inflation rates, but the Tories are beginning to push the debt levels and making the electorate look too, and they are dire; the worst ever.

Very interesting seeing Baroness Symons (not my baroness) spout her crap about the cost of oil before being cut down to size by being informed the exchange rate has largely deflated the cost of oil. It would have been better if someone had also explained, on national TV, that it takes an eighth of penny rise in petrol to make the actual cost jump, the mass of the rise of that single penny being tax. No good blaming oil prices when the tax take is just shy, not including VAT, of 700%, and the public is becoming ever more aware of this. What will Brown say when his deferred couple of pence rises in fuel duty kick in this month?

Ellee - food prices are likely to rise, but we have some solace in that it will become more viable to farm again in the UK &EU without subsidy, I don't forsee shortgages!

BS - The government do badly in trying to explain this away as a global problem as it is a US and UK issue by far and away. Even euroland suffers from a different from of problem in the shape of the misallocation of resources caused by monetary union.

And it is only January, tougher times will last a long time.

I don't think that dropping rates will boost discretionary spending at all. My anecdotal evidence suggests that people have lost confidence and that money that a year ago might have gone on a nice holiday will now go straight into the ISA. People can see the rainy day very close ahead and are pushing hard to save enough to ride it out.

The falling pound will push up energy prices but I don't think we need worry too much about other imports because we will start to buy less. A lower interest rate and a lower pound might even start to make real business start to look attractive again...

The inflation figures are laughable (except for pensioners of course).

To cut or not to cut...either way it's bad news for sterling.

Its obvious that the inflation rate for the poor - e.g me - is a lot higher than the newspaper rate - not just food and energy but also things like council taxes, water bills... It also hits people on lower incomes more as it is a higher proportion of their income. I am amazed at the low incomes people seem to manage on...Its not a surprise that people would rather be on benefits than taken low income jobs - its only a surprise that anyone at all - other than Poles, take the low income jobs. There are many ways 'employers' avoid paying the minimum wage...

"what is the real interest rate" Even Homer nods.

I assume "naughties" is deliberate.

"Ellee - food prices are likely to rise, but we have some solace in that it will become more viable to farm again in the UK &EU without subsidy, I don't forsee shortgages!"

But as you said, CUS, just create more cash and all is well.

What BS and TPA have said.