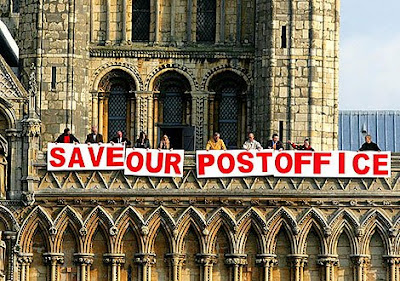 As we reported back at the start of April the Post Office Card Account {POCA} is becoming another protest story for the government.

The current contract for Post Office Card Accounts (POCA) runs out in 2010. It has 4.5 million users, and generates £1bn of revenue for the Post Office. It is what brings up to 30% of people into the Post Office and is absolutely fundamental to Royal Mail's "Forward to Eleven" back to profit by 2011 initiative. However the card account is out to tender and rivals have put in strong bids. A shame really as the POCA is a government benefits payment system that works exceptionally well as it is.

So this week Save our Post Office campaigns are springing up again.Printed leaflets are going out to pensioners, petitions are being signed, and MP's lobbied. A very powerful, and extremely media accessible story has started running, one that the government may wish it could avoid.

It will be very easy for opposition parties to ask questions about the future of the Post Office network. Lib Dems are always very keen to highlight this perceived lack of concern with communities. They may ask for clarifications of the governments stated aim of no-further planned closures and a network of around 11,500 offices.
Unhelpfully Royal Mail have refused to back this statement and they have said that they could operate with only 7,500 offices.

Further questions about how many offices would close if the card account is not retained will be equally unwelcome. [it will be around another 2000-4000]
Why would the government feel the need to seriously jeopardize its own plans for the network and enrage the population on what in effect becomes a local issue so soon after a terrible showing in local elections?

The answer will not help Mr Brown either. A European ruling on competitive tendering means that he has to act this way and open the tender to competition regardless of his own domestic wishes.
Posted by Bill Quango MP

Open tendering ok. But does that mean he has to accept the lowest bid? If that is not compulsory, he can satisfy the EU's "requirement" to have held the auction, while still maintaining the Post Office status quo by accepting their bid as the most suitable. Trebles all round. Watch this space?

Nomad.
I really hope that that is what happens. Why they keep issuing this contract in two year periods is also a mystery.