A few days ago, Tom P over at Labour and Capital asked me: "is it affecting the real economy ?" and you can see my reply there.

Just to illustrate from my own neck of the woods:

For well-understood reasons, wholesale electricity prices are volatile with a capital V - indeed the most volatile prices ever traded. You and I are not exposed to them in our domestic bills because the utilities hedge them for us. Indeed, most industrial companies tend to prefer to be hedged too, and until now they have been able to obtain fixed-price deals from the suppliers. 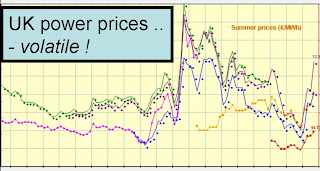 Just in the last few days, however, suppliers have been notifying large industrial customers that this hedging may no longer be available to them through their 'physical' electricity purchase contracts. Needless to say, the financial players in the electricity market are withdrawing from long-term hedging products, which means the utilities are increasingly unable to lay off the risk. So they'll be passing the volatility through in the electricity price - and the industrials also won't be able to get financial hedges.

As night follows day, so their industrial customers will be forced to pass this through in turn ... and at the end of this chain, one way or the other, sits the consumer.

Oh yes, this is the Real Economy all right. And that bell you hear tolling in the background ? - never send to know ...

I am no longer feeling dovish.

They should ban short selling of electricity!

Perhaps once the derivative positions unwind - then market prices will be determined more by factors such as supply and demand and there will be less rather than more market volatility. The case that derivatives have enhanced market stability and improved market efficiency is not one that many people are arguing in the present environment.

Doesn't "volatile" just mean they go up and down a lot?

What is so terrible about that?

Given that the suppliers can't, for practical reasons, make the retail selling prices volatile, what will the effect be in practice?

"Doesn't "volatile" just mean they go up and down a lot?

What is so terrible about that?"

Out in the real world companies have to make decisions about production, prices and investment - so what decisions do you make when prices are volatile? Of course, rather than letting market prices in efficient markets provide the signals to help make those decisions you could try something else - but the Soviet and other models used haven't been noted for their past sucesses.

Doesn't "volatile" just mean they go up and down a lot? What is so terrible about that?

BIG topic. Nothing very terrible per se - indeed, up to a point it's a 'vital sign' - but some consumers are not well-placed to handle it (like you could say that a number of traffic accidents happening all the time is a sign of activity on the roads: but most drivers couldn't afford not to be insured)

also - first principle of risk management - risk should reside with they who can manage it best. Granny can't effectively respond to a spiking electricity spot-price (we don't want her to switch off), but maybe the utility (or the financial player in the market) can: so they should be the ones to bear exposure to spiky prices.

Some industrial buyers can respond effectively to exposure to spiky prices (by fuel-switching, or taking the swing on inventory, or changing production schedules etc etc) but others can't. It would be speculation on their part (*hiss ! boo !*) if they did NOT hedge.

Often, companies can indeed pass costs through, if they and everyone else in their industry will otherwise be wiped out, and they are producing something that people need.

space does not permit a full explanation, but it can be shown that for competitive commodity markets to thrive there are three necessary and sufficient conditions, one of which is an effective forward (or futures) market, i.e. a market in hedges

likewise, a comments-column reply wouldn't do justice to Toryboy's assertion @ 2:50 ...

Derivatives - bets on the price of assets - can sometimes reduce and spread risk among different agents. But bets and bets on bets on borrowed money can multiply risk and could lead to catastrophe.

Of course no-one claims derivatives have a job to do any more. It is precisely their unwinding that is causing the present crisis. TB's expressed view belongs in steam-age economics.

"market prices in efficient markets provide the signals" do they, tory boy?
And where are the forward markets for manufactured goods, that you would need to make this sort of assertion? and how far into the future do future markets reach? and on what basis do you make statements about the efficiency of markets, such as there are?
Clearly you live in a utopia, that makes the Soviet utopia pale into insignificance.

caronte this is not something I ever thought I would write ... but on the snippet you quoted from TB, I am with him !

there is indeed a forward market for manufactured goods, or at least forward exposure, because in many industries it is the practice to fix price-lists (and be held to them) for one or even more years ahead

which is why they must also forward-fix their costs = hedge them, if they are not to be exposed to pure, speculative price risk

and so ... derivatives have a fundamental, vital and continuing role to play (pace, HG).

as do price-signals from undistorted markets, both spot and forward

and I would enthusiastically see market-distorters in the same jails as the Enron bad-guys: how about, FBI et al ?

(may I assume you already know why farmers depend on derivatives ??)

I don't deny derivatives can play a role - they can be used to hedge and reduce risk - and there is a very strong argument that a lot more companies and individuals can and should use them in this fashion. There are an awful lot of companies and people who are exposed to financial risks of which they are not aware - and which could be better managed by hedging derivatives.

However, the vast majority of derivative transactions are not undertaken by hedgers, or market makers, but by speculators who use derivatives for leveraging risk up rather than down. And all the evidence (which is getting stronger by the day) is that they increase rather than reduce market volatilty. They are also often undertaken by hedge funds and others who are notoriously opaque in their operations - and isn't perfect knowledge meant to be necessary for the functioning of effective markets?

Caronte - I agree that perfect markets are unlikely ever to be achieved. I come from the Keynesian/social democratic position in believing that markets are not always efficient and self regulating and for that reason they need state intervention and regulation, but that said they are still the most politically acceptable mechanism that we have for allocating resources.

Hatfield Girl - if you read what I said you will see that I also believe that it is the unwinding of speculative derivative positions that is causing volatility. As for the jibe about steam age economics - I think you will find if you look at current economic literature there is a pretty healthy debate about the impact of derivative trading on market volatility(see Nick's comment on this as well - but even some latter day steam age economists such as our mutual hero Nicky Kaldor have a lot to say that is valuable in this regard) - and perhaps it is you that has a problem in recognising that all on the left are not necessarily marxists/trotsyskists/stalinists/corporatists or whatever is your label of choice this week.

Cross purposes, TB. I understood you to be a believer in efficient markets for derivatives.

Nick, how can you confuse price lists - which can be revoked at a stroke at any time - and binding contractual obligations?

thanks caronte, your distinction is a valid one but no, I am not confusing

in the industries I refer to, binding forward orders are made on the basis of the prevailing price list

I personally think that the capitalist system is just near its grave. Today lots of people try to get out of the system, and it's really great.