The Wonder of Woolies. 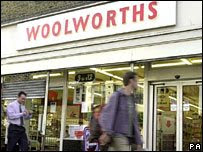 The wonder is what Sir Alan is doing investing in retail giant Woolworth's?

If we asked him does he think the market has bottomed out and its about to climb? Does he think that cheaper goods will be the order of the day now borrowing is over?Does he believe that this the end of the recession already? We would get the inevitable response "If you believe that, You're Fired!"

Woolworth's have been lurching along in the UK for a good few years now. A pretty poor set of results last Christmas on top of a slump of 3-4% in sales for 2007, a pre-tax loss of £99.7m for the six months to August '08, shares falling more than 80pc over the past 12 months and scrapping the interim dividend hardly inspire confidence. To alleviate their troubles the strategy for 2009 involves selling up to 120 stores, cutting a large number of products and job cuts and cost controls.

The problem with this strategy is job cuts and cost controls have been ongoing for at least two years now. There is only so much fat to trim, and no-one starts cutting costs with the leanest cuts. And disposing of stores in a property slump? Cutting product range has been proposed by analysts for years too, and this remedy is looking a bit like too little too late.

However Woolworth's have many excellent prime location, large unit size properties in great cities and towns and shopping centres where units of the size of a Woolworths rarely become available.
Maybe Sir Alan Sugar, who has a lot invested in commercial property, IS calling the market early but right, what with 10% of Woolworths led by the Icelandic retail Baugur group, and wants to be available if some very choice retail properties and the commercial distribution properties suddenly become available.

For those with some cash to spare there may well be a lot of Woolworths priced bargains to be had.
Posted by Bill Quango MP

Met Sugar a couple of times, and he is an arrogant twat that probably thinks his own personal intervention will bring the company around.

He probably has a gadget or something he'll demand they sell at Chrimbo.

He is almost as detestable a tosser as Branson.

Woolworths has had 2 problems

1. It doesn't know what it wants to be. I don't go in because I am confused about what it sells. On the rare occaision I do pop in I am even more confused, its a jumble of incoherent products.

2. It has predominantly High Street stores and has suffered from the flight to out of town retail parks.

Sugar may be able to sort out 1 and there is now a big move from town planners to get people shopping in town centres again.

I think it must be the prime property. OK not so prime because Woolies are generally only on less well-to-do high streets but very comprehensive nonetheless. Perhaps he will turn them around in time for the upturn?

Sure, but he has lost lots in the past; look at his history and it is not towering success from start to finish. A bit like how Branson has never owned a real profitable company in his own right.

Don't mistake richness for shrewdness; he saw a virtual bargain price with Christmas right round the corner, when Woolies traditionally makes 80% of its yearly profit, so will buy now for nothing, and sell on January 1st in time to see Woolies go under. If we were all twats like Sugar there would be no companies left, though we would all be rich, twats, but rich.

Personally I want to be rich and able to sleep soundly at night with a clear conscience that I did something other than bleed someone dry for a profit margin.

Houdini
There was a sketch on a comedy show about the apprentice where Sugar says "You lot are rubbish! You've given me nothing! An I already make that"

TGS: Woolies have replaced M+S on business studies courses as a "What went wrong?" project. Your points would fit right in on at the top of the answer list, along with collapse of CD + DVD sales, not enough of a video game presence,the rise of the supermarkets, digital cameras {years ago W was the place for passport photos} many niche retailers do the same better.. and plenty more.
They are still my first stop for kids toys for Xmas though.

BE: I am with you on this. I saw a large Woolworths on a prime of prime High Street in a market town, sandwiched between M+S and Next and thought how much Zara or Monsoon would like that space.
Pity Woolworths didn't get The Crown Post Offices instead of WHSmiths, as they generally have more space and could have made quite a good go of it, having a similar demographic.. kids and families and pensioners.

Houdini 2: you may be right. Shares are trading so low its possibly a move that almost has to be made.

bbc news today: "Woolworths set for administration" - so who's going to get fired for that fck up?