The peasants’ struggle against the landlords 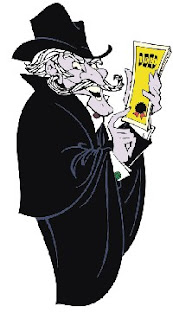 Threshers owner to close 400 stores
First Quench Retail, the owner of chains including Threshers, Wine Rack and The Local, is to close up to 400 stores in order to cut costs and improve profits.
A spokeswoman said: “We are in negotiation with the landlords of unprofitable stores. The number of stores that could close is dependent upon our capacity to reach suitable agreements with these landlords”.

High Street shoe shop chains Barratts and PriceLess have gone into administration, it has been announced.
Barratts and PriceLess are owned by a Bradford-based firm, Stylo. The parent company is not in administration, but its shares have been suspended."the board has concluded that current and projected sales cannot support the current cost base of the business, in particular the high rent obligations," Stylo's statement said.

And from MFI last month
"It is however disappointing that the landlords of the shops pulled the plug and did not give the management time to turn it around."

It has emerged that two more big names had asked their landlords for help with rents. Focus, the DIY chain, and Land of Leather, the furniture retailer, have asked for rent reductions and monthly payments across their portfolio to ease cashflow. {Focus pretty much succeeded too.But large firms have more clout}

The Daily Mail's 'Fair Deal for Small Firms' campaign announced it was seeking a move from quarterly to monthly rents for owners of three shops or less. Well.. that was October..
Last month The British Retail Consortium was still trying to get 3 months in advance rents reduced to a month in advance and has issued businesses with a template letter and draft contract. The BRC has been calling for this for a while, with some success, notably pension fund manager Hermes

A conservative MP has called for the government to provide more support to small businesses after learning that an award-winning and much-loved local bookshop has been forced to close. Yep, one of thousands by the end of the year..

A massive overhaul of retail renting is long overdue and would benefit all retailers and landlords too. To move to a monthly rental for the smallest would be pretty easy, with an administrative charge being added to the rent, and some changes to terms.
If the government really wanteds to help really small business it would have acted before the January quarterlies were due.Dealing with a crisis isn't easy, but Lord Mandelson has been supportive of this scheme . Time to move it up the agenda before many more firms go bust when the March quarterly arrives,which needs to be paid from the three weakest months trading, in the worst economic climate since 1991.

Oh, and the quarterly VAT bill is due same month.

Did someone mention business rates?

Given the current difficulties being endured by one and all, these landlords appear to be very greedy people.

How many of them are in fact the banks?

Blue Eyes, although the tenant has to pay the business rates, if you reduce them, then all the landlord does it put up the rent.

Successive UK governments have tried this and that's exactly what happens. In economic terms, commercial premises are in fixed supply in the short term, so taxes thereon do not reduce the amount 'supplied'.

In economic terms, Business Rates is a tax on the landlord's income, not on the tenant's occupation costs.
-------------
What is surprising is that landlords are prepared to cut off their noses to spite their faces.

Land Value Tax will sort all this out, as it would be payable even if the property is vacant, giving landlords a further push to get at least some money coming in.

Only if demand outstrips supply. Soon there will be so many empty retail spaces that the landlords will be turning to the government for a bail-out.

One point. Most commercial leases have revaluation points. Every five years say. But those revaluations are only ever upwards. That makes the market very sticky indeed. You actually have to go bust to be able to reduce your rent!

Rents may well be a problem, but what is the underlying problem facing most business? Rates are far more of a problem, and then factor in new regs and directives, like for rubbish. A pal of mine has been told he can't throw away even tea bags without it going into business specific and expensive rubbish collections.

This bunch of corrupt bastards called the Labour party has regulated business to death.

BE + Houdini:
MW is correct. Rents are the worst evil. A thriving business becomes a break even or loss maker almost overnight.
Business rates are just a tax.
Nothing is gained by paying them except a contribution to the local authority.
Rubbish, policing,power etc are often paid for privately.
But then VAT is just a Tax. NI employer contributions is just a tax. Business just have to learn to live with them. They are due to rise very sharply in 2010/2011.Much to the SBF annoyance.

MW: Businesses are demanding a reduction or scrapping of the empty premises tax already. After 3 months grace tax kicks in.
Lord Mandelson has said he doesn't believe that it would help to remove the tax. Daily Mail campaign is all for 100% tax relief on empties.
This current recession will bring it all to a head. Landlords cannot continue holding onto empty premises to force up rents as there will just be too many empty units. A showdown coming on this one..

Which leads to TW.
Here lies the madness.
One of the reasons that Landlords don't want to lower rents just to get some revenue is because it would distort the rental value . Lease rent reviews {upwards only..regardless of economic conditions or a leaseholders ability to pay} and similar/same street/local area properties are used to justify price hikes.
Rent out at below market value and the justification for a rent rise is untenable. So some elect to keep commercial property empty.
There are legion examples especially in secondary and tertiary locations where units are vacant for years and years as the other existing tenants, over time, will pay for the loss on the empty.

And evil landlords anon?
Yes, many many are banks and building societies and insurance groups, as well as property companies, investment groups etc.
But they have their own problems too.
A landlord may have let a unit in a shopping centre on a 15 year upwards only of say, £50,000 pa.
They then rush to the bank with the contract and borrow £1,000,000 against it to finance the next retail park or industrial estate etc.
If the tenant goes bust they HAVE to get at least the old revenue to make the payments.

Some landlords offer % of turnover as rents. Its risky for both sides as turnover isn't profit and a shop that turns out to be a dog for a landlord may comfortably support a small operation, who has no need to turnover more.

Landlords and leases..
It all comes from the Middle Ages and makes about as much sense.

That's true Bill for business that pays rent on some commercial property, especially on office space, but many don't or have fixed term and fixed rise rents in small units. It's the rates that get them and stifle their development, along with the raft of new H&S and ecowibble regulations from local councils.

If the landlords hold a disproportionate amount of control over the lease (which is, after all, just a a contract) then it shows there is a distortion in the market. That means competition issues within which I include planning issues.

Is this one of the reasons that goods cost so much more here than in, say, France?

Tim Wortsall - interesting new approach being taken I see here in the last couple of weeks. Company Voluntary Arrangements - might be a way around the common issue which you point to.

Or you could do what a former colleague of mine - now CEO of small chemicals company - just did to his landlord..."Here are my books. You can see the cashflow. If you do not lower the rent now we will be in administration in 2 months at best. We can afford to pay X. If you help us out we will still be here & we can review in 12 months." Much to my surprise the landlord said ok. Result: 65% reduction in the rent.

Of course, he is lucky because his landlord is an actual human being, not a faceless city megalith.

Might have to concede to Houdini that RATES and REGULATIONS are at least as likely to cause unprofitable companies as landlords.
{Not that I really ever thought that they helped anything}

ProCook has announced the closure of its 18 stores, with the loss of approximately 100 jobs. Managing director Daniel O'Neill said the closures were "due principally to the ever-increasing business rates...these cost pressures have made high street retailing difficult and in many cases impossible in conjunction with the present economic downturn."

New regulations coming into effect 1 January are too complex and too costly and may mean many travel operators will no longer offer travel insurance, say ABTA.

SW: Many Landlords will do a deal. In good times and to a big Landlord if you are a small company you have little chance.
But at the moment there is a growing body of chain stores demanding better deals and terms.

The difficulty I see is that many big chains are also big landlords.