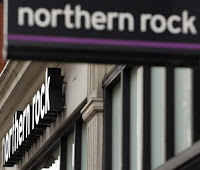 The Treasury, ever keen to help out its former/current leader, Mr G. Brown, is today alleged to be looking at a sale of Northern Rock by the end of this year; just to show how right the Government has been in this crisis.

I doubt this will happen as the current sunny uplands of green shoots are going to get a rough ride when we come round to September/October again, if not before.

Also, what is Northern Rock now? 50 high street stores, a current account and savings business and a £100 billion mortgage book of dodgy interest only mortgages. Plus the Government has sunk £3 billion into the beast to maintain its capital.

Then there is the work out of the funding structure Granite and the fact that the Government wants to use the Rock to encourage more lending to residential mortgage market. No one will buy this at a good price and half the banks in the UK won't be allowed to for competition reasons in any event.

Instead there will be a 'spin' operation:

*Northern Wreck will be stripped of all toxic assets that will be lumped elsewhere in UKFI (the Government vehicle).

*Only the savings and 'good' mortgage book (what is left of them, most of these mortgagees have been pushed to refinance elsewhere and the money used to repay the £25 billion loan, did I mention the Rock still owes another £8 billion).

*Accounting trickery will be used to show most of the Government money is repaid or converted in bonds or some such mechanism.

*A willing buyer, like Virgin Money, will be found and will pay a sum of money that can then magically be shown to have made a profit, say £1 billion or so for the taxpayer.

Champers all round for the Socialists who have outsmarted the Capitalists!

(N.B Event not to be held in the same room in the treasury where the hidden losses and toxic assets are to be left to quietly rot away, out of sight and mind of the voters)
Posted by CityUnslicker

Royal Mail have been asking for the NR banking licence and HMG to roll the remaining branches into a Post Bank.
There has been talk .. and talk .. and talk.
In fact it was last absolubtely, positively, definitely due to happen last January.

The Post office think that the government will never commit to it and going ahead on their own with Bank of Ireland.
But maybe you are right and the gov is just waiting for some greener shoots so it can rebrand Northern rock as Postbank and start off a nice new joint venture with a very black hole.

They're stupid. I thought we sorted this all out about a year ago?

1. Sell off branches, employees and savings business ASAP (like they did with B&B) preferably as a job lot, but broken up if necessary.

3. What's left over is fairly 'toxic' stuff, but hey, at least they're paying the higher interest rates.

4. Have rabid policy on repossessions, get it over with before house prices fall any further. Properties to be auctioned could be offered in priority to bondholders, SPVs and shareholders so they know they aren't being conned. If these people want to rent back to original owner, then all the better, less hassle all round.

6. Whatever money comes in after that gets dribbled out over the years to bondholders and SPVs, who will get most or all of their money back (well, at least half or two-thirds), maybe even shareholders get a few pence.

surely you have to say that here, the capitalists didnt cover themselves in glory?
i know i know, the thing should have been thrown to the wolves, but what about letting lehman's go etc etc. the argument is becoming circular.
im starting to think this was at that moment in time the least worst option. after all, who could have left hundreds of thousands of depositors (voters) in limbo?
why is the wreck a bugbear of yours? theres not nearly as much criticism of the policy or "investment" made in other stalwart financial institutions.

MW - sound plan. cross that one off the list then.

ROYM - Wreck was known about for a long time. Nothing was done at all. HBOS/RBS got into terrible trouble and had to be bailed out.

Wreck was never a systemic bank, just like B&B was not either.

FFS, the FD resigned saying the thing was going to pop 6 months before it did. markets only function if the rules do and the rules were broken/fiddled becuase it suited the government.

Wreck is a hobby horse of mine for this reason. The govt had far less an idea of what would happen re HBOS/RBS and so had to deal with the disaster at hand. It saw Wreck coming and did nothing; a much worse situation.

And now it wants to hoodwink us into thinking it knew what it was doing, when clearly it was in full panic mode.

Dont forget it is a Labour Bank with H.Q in a Labour area and most of the employees live in Labour voting areas.Simple.

One little quibble with that nice Mr Wadsworth's plan. Giving priority on sale after repossession to those with a direct interest in NR might come a cropper legally.

Although the mortgagee (NR) has considerable leeway in how it markets properties it remains obliged to get a fair market price because the price attained impacts on the mortgagor's outstanding debt. Any hint of purchasers being given preference could (I put it no higher) lead to a steady flow of delicious litigation.

It might be time to get the old horsehair wig out of mothballs.

All this talk about an economic recovery because house prices have crept up a bit is unbelievably short-sighted. Selling Northern Rock could remain nothing more than an ambition for years to come if things really got tits up.

The Northern wreck is a busted flush. It should be liquidated as soon as possible. The only reason why it still exists is because it's HQ was in Newcastle - if it were in,erm, Cheltenham or Gloucester then the govt wouldn't give a shit and call it a commercial decision.