Energy Security: Could We Take It Seriously, Please ? 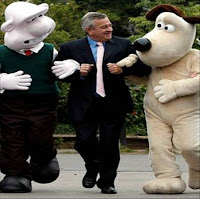 A couple of years back when he was Energy Minister we unkindly called Malcolm Wicks a clown. He’s a nice enough chap and, no longer wanted in government, he’s been made Brown’s special energy envoy or somesuch. (That’s Brown who went to the Middle East last year to ask them to reduce oil prices, and who presumably credits himself with the fall from $ 147.) And now Wicks has written up his thoughts on security of energy supply.

It deserves better than his essay, which would get only mediocre marks as a first-year undergraduate project. Wicks was always known to Civil Servants as – how shall we put this – not one for detail, so it's unlikely he wrote much more of this than the personal travelogue anecdotes of what he was told on his visits around the world. Whoever did write it has been sloppy in the extreme: witness this sub-Rumsfeldian tripe:

I will spare you the full catalogue of howlers and omissions: genius like this makes it hard to take the rest as seriously as the topic deserves. To be fair there is a plus-side: he’s realistically sceptical (though very diplomatic) about the potential contribution of renewables. Most of his conclusions are anodyne, save for a couple of headline-grabbers: he wonders aloud about hiving off some UK gas storage and long-term gas contracts for ‘strategic’ purposes, and then this blinder –

Considering an aspiration, eh ? Bold stuff. The real meat is in this one, though:

“If the Third [EC] Energy Package does not bring about liberalised markets across the Union, we will need to think clearly about how we should mitigate this risk”

That’s the one, Malco m'boy. Even the dour German Monopolkommission is exercised on that score. Any chance Gordo might make this a priority in his final few months ?

Surely this is just a poor attempt at another 'celebrity policy review' (as Lord Turnbull would say).

Which, rather alarmingly, probably means it was written by DECC civil servants (generalist policy wonks transferred from BERR and DEFRA) and signed off by this chap you're on about.

Then again, maybe I'm being cynical.

No, you are not being cynical. Civil servants write most things for ministers. Some ministers modify what they're given slightly. Sometimes the civil servants have to guide the minister away from making a total twit of himself.

This was probably written by a bored junior who knows Liebore are doomed. So, who cares? would have been the junior's watchword.

No, no, no, it's the SPAD's that modify things slightly before the Minister signs it.

oh, there's no doubt the boilerplate stuff was written by a little team from DECC: their names are listed

and very junior they must be, too, (and no editor) given how slipshod it is

there's a 'panel of experts', too (a motley crew)

it's all the first person prose that brings a smile

see, if they'd put me on the panelofexperts, I couldn't be rude about it, could I ???

Nick, get your book written and out on the shelves. Sorry I didn't encourage you as much as I should have done last time. Don't leave this issue for the micro-audience and goldfish-attention of bloggerdom.

Dear Zeus, and do we pay these people?

EDF capital requirements crash into Wick's "aspiration that nuclear should provide some 35-40% of our electricity beyond 2030". Which do you think will win on an even playing field?

Pierre Gadonneix, chief executive of EDF, wants electricity prices to be increased by 20 per cent over three to four years to fund investments. Last week, however, the French Government proposed a 2.3 per cent average increase in electricity prices on regulated tariffs over the next three years.

EDF longs for a comfortable regulated leccy generation market that will partially pre-fund nuc capital, not the UK competitive one.

RW - you are obviously right!

having said that, the utility value of electricity, in particular, is very high indeed

ND: What I don't understand is if/why EDF themselves really want to build new nucs in France. It just seems to be to prop up Areva (and I guess employment in France) - which shows that the French govt has a grip on nationalised companies, unlike the banks in the UK!

In the US they are talking/researching life-extending PWRs toward 60 years, and 40 years is very ordinary.

France already has excess nuc power, such that they have to load-follow which is sub-optimal for nucs. The oldest PWRs are 1977, and at 900MW are decent kit. 40 years takes the oldest to 2017, 50 years to 2027. They don't need new nucs, except as make-work.

If EDF was to profit-optimise it wouldn't order any new nucs until 2012 at the earliest, maybe 2020. In fact it would probably buy gas plant until all the nucs run base-load.

Any chance EDF will shake free of the govt and follow this rational self-interest? It is this back-Areva policy that will bring EDF nucs to the UK, but how will they fudge the bad economics in a way the EU will accept?