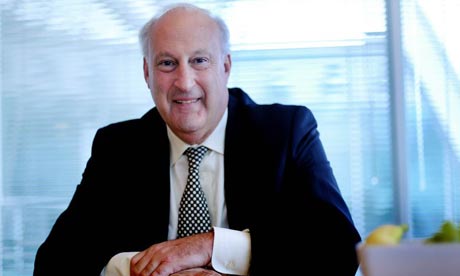 But for Blank's show of ignorance. Here is a 'City Grandee' dispalying all the worst characteristics that we have come to expect.

Sir Victor says they had no idea about the problems in HBOS; perhaps they could have done some due diligence to see what they were buying? No, not when Mr. Brown the Prime Minister had asked so politely.

Lloyds were ignorant and it has sure cost their shareholders.

Sir Victor also offers no mea culpa, instead there are weasel words about a need for change and someone having to take a fall. Let's face it he should have been sacked for incompetence and landing the Bank with such a bad deal.
Posted by CityUnslicker

Really? wasn't he reading this blog?
Plenty of warnings if you look back.

GOLD TV has been running the "Yes Prime Minister" series in which a character called Sir Desmond Glazebrook, played by Richard Vernon, turns up as the epitome of the City top men. He is somebody who never knows what is going on, and doesn't want to, who is just a big batty and disengaged, and whose ethical standards are distinctly elastic in an old boys club way. Perhaps things have not changed all that much.

Blank should not have allowed himself to be such a pushover for Brown. But then Brown should not have pushed for it in the first place. If Brown had any competence at all, that is. So Brown was protecting his ass rather than Lloyds assets. Both therefore have been bad for UK plc.

That t was not a typo for v was it?

How extraordinary. The banks like Lloyds and HBOS should have just been allowed to go to the wall. By the rules of the market new businesses would have filled the gaps very quickly and we would all have been better off - aint that what banks always say?

Mutley - surely Lloyds would have survived without taxpayer money if they had not been inveigled into 'rescuing' HBoS?

I somehow doubt that RBS would have appreciated the craziness of the HBOS model - their deal with ABN AMRO was probably even crazier, and I'm not sure that Barclays' bid was much better!