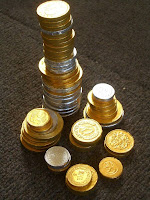 A bit busy these days, but couldn't help pausing to smile over the angst that the new capital strictures of Basel III are causing across various European jurisdictions - you know, the ones who are pretty sniffy about the laxity of 'Anglo-Saxon' financing practices. And yet somehow it is UK banks that already meet - nay, exceed - the primary new standard.

'Twas almost exactly three years ago that the Schadenfreude 1 outbreak occurred at C@W, when two German regional banks were the first to go bust in the great Crisis. A bit unseemly I know, seeing what happened next at NR, RBS, HBOS etc etc.

Another thin smile is merited at the outbreak of: if you make us hold more capital, we won't be able to lend so much money. This is like the perennial traders' whinge: if you hold us to strict risk limits, we'll be forced to close out positions just when the markets are moving against us. In both cases the immediate answer is a dry - errr, Yes.

Hm. Yes, I wonder if we might not all still end up as losers. As you point out, Northern Rock did indeed exceed new capital level requirements, yet still had a run on it and had to be nationalised.

Somehow or other, we have to find a way for free market capitalism to apply to banks, and for them to be able to fail...

That's easy, the ones that fail are the ones with a low deposit to bondholder ratio, let the bondholders take the hit and put up with a bigger recession.

Basle III will certainly result in less lending, but this will benefit us rather than hurt us because the total amount of lending is already more than optimum. Reason is that we allow banks to borrow short and lend long (maturity transformation), and this results in more than the optimum amount of lending. The increased capital requirements effectively reduce the extent of maturity transformation (but not by nearly enough), thus we will gain rather than lose.

I go into this point in more detail here (see point No 4 in particular):

Nick - 'scuse the ignorance, but do the Basle3-compliant reserve margins of some of the British banks in any way include the money pumped in by the Government?

AMTTB: have to find a way - yes indeed we do, and I don't believe it's as complicated as all that IF govt is willing to stare down a handful of very aggressive and greedy senior looter-bankers (who have a great deal at stake personally, and didn't get where they are without being quite good at staring-contests)

I persist in the view that NR, in particular, could easily have been headed off, under the rules as they stood at the time, if the FSA had been properly proactive (as opposed to taking the hint from Brown they were to lay off) any time from late 2006 onwards when it was obvious to the City that NR was a indeed a crock

others would say the same about HBOS (not my specialist subject)

now, which Board was it that you wanted to be on, we may be able to arrange something ...

capitalism AND democracy - yes, that's the killer, isn't it Steven

rule-of-law takes precedence over both, so far as I am concerned: knock their heads together !

Musgrave - welcome: thanks for the link to your interesting post which I need to ponder

Sackers - to the extent they bought new shares, I believe the answer is yes

someone else may be able to expand or correct

Much German holiness about good housekeeping, much German lobbying to derail Basle III, much German issuing of Rights to stop mammories pointing upwards....the Deutsche Bank/Postbank marriage of convenience being a classic example...
http://nbyslog.blogspot.com/2010/09/deutsche-bank-postbank-real-story.html

unless CU is much mistaken, James, it is likely to be Official Government Policy ...

thanks, JW - another excellent link

Anyone seen the news about The Boys from Basel eyeing Tier 2 capital rules?
This could mean....drumroll...bankers having to take RESPONSIBILITY.
What?? Cue endless lobbying about socialist interference, end of global banking as we know it etc etc.
Blimey.
http://nbyslog.blogspot.com/2010/09/breakingbasel-to-look-at-tier-2-capital.html