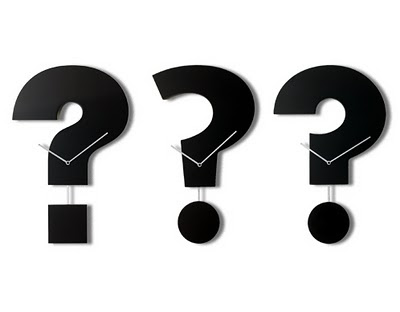 The return of the never popular question time guess compo. You guess questions from the 5/6 that will be asked. Also completely arbitrary bonus points awarded for predicting a key word, theme or phrase from members of the panel. Answers in the comments.

- Have police given up the streets?
- Who do panel support for labour leader?
- Was the pope's visit a success?
- Is it OK for children to make noise at playtime?
- Should the HMRC write off 1.5bn of unpaid tax?
- Does captilalism kill competition?

Hey BQ - do you think you should put your guesses as the first comment, rather than in the post, I have a struggle not to peek :-)

A new series begins. Who was the overall winner last time?

A bit out of practice at the moment but here goes:

How short should you be wearing your dirndl?

New drivers should not drive on the right

Are we nearly there yet? And if we aren't bankrupt what was all the fuss about?

Does having your first child while still at school unfairly advantage the newborn baby?

Gearing myself from the long recess..Now I know what its like to be an MP!

1) Is the UK headed the same way as Ireland (-1.2% GDP) double dip etc?
2) Will the spending review/cuts cause the effect in question 1? (going for double!)
3) Should we all be made to repay HMRC when we believed our tax was correct and Visa-versa?
4) Is the suggested scrapping of the ASBO part of the Police street retreat?
5) Will the coalition last till Christmas ? :)
6) Who is earning £100,000 + and are they / would they be happier on £50,000 ? (Throw away final question)

good luck everyone (especially with the arbitrary scoring!)

-Pope visit & apology.{Liverpool is catholic}
- Public sector cuts {Liverpool is public sector central}
- Lib Dem supporters are turning to Labour {Liverpool is a Labour stronghold
- Is there any need for cuts at all as the economy is growing {Liverpool has a great many people receiving some form of benefit from the state}
- ASBOs { Liverpool is .. well you get the idea}

1. John Redwood will tell Vince Cable that land value tax "is a dagger to the heart of property values.

4. Troops out of Iraq yadda yadda.

5. Caroline Flint gives smouldering toothy grin from beneath floppy fringe and wives of viewers around the country get jealous.

1. Cuts (to rhyme with puts)
2. Cutz
3. Kutz
4. What would the panel do to pass the time if stuck down a mine (together) for three months ?
5. Should Commonwealth Games swimmers really be made to use a cess-pool ?

Bonus Qn: should Tim Nice-But-Dim really have been shot when all he was doing was drunkenly firing at the rozzers, I mean come on, when a chap can't go on a bit of a rampage ...

1. Wayne Rooney - a true liberal?
2. If we put all scousers in prison, would we solve the crime problem?
3. Liverpool football clubd - a lesson in Spivs taking over
4. Who is the government to say the lifestyle choice of unemployment is wrong?
5. This question has its windows smashed in and got nicked.

1} First question the Vince vs banker spivs. Ian Hislop asks Vince if he is going to do it. John Redwood manages to stick up for capitalism and for Mr Cable too. Mhedi Hasan's Mr bean gag falls flat, yet he is right that Cable was making a left wing speech for a left wing audience, and deservedly gets the most applause so far. He goes too far afterwards saying VC is only a fig leaf lefty, but then Hasan would think Lenin was a bit to soft on nationalisation.
Vince C defends his corner. We need banks and we need banks to lend. Hasan interrupts and scores points. He omits that new Labour didn't get banks lending either.
Caroline Flint pretends otherwise, but her lot had the hands on the throats of the banks and didn't press the advantage. Achieved zip. CF then waffles on about a question that hasn't been asked.
Vince is party line on here, where he was Lib Dem line at conference. Consistency is key Vince!
All gets banky shouty and becomes a bit pointless.

2} Can the Lib dems survive as a political party?
52% of lib dems feel sold out. On Mock the week earlier Dara O'Brien said "well, half the Lib Dems were tactical voters anyway. They were left wing supporters trying to keep Tories out..really they were just Labour and have returned." Good point.
MH is quite good saying no one knows what will happen next. He means its too early to say. Quite right. VC says 'tackle debt/have to work together. He too is right. He has years to get the economy right and make play on 'working with other parties'. IH says this too, except he's a bit harsh on the Libs. Students in the audience show where the Lib Dem support has been lost. Clegg was portrayed as a sort of Obama pre election. Lib Dems can always target the 14 year olds today who will be social liberal students next time. JR also tries to imply that the Libs will get the recognition for their support.
Only if its a really big success John.{audience member asks nonsensical question about Cables past..implying he's getting more right wing..falls flat. Then ponytail alert! EU question from the scouser hippy that is completely ignored by Dimby}

3} Can we cut police force without crime increasing. {not quite what the commissioner was saying. He wanted police out of admin and onto streets}
CF talks bollocks about police numbers {incls PCSOs and not beat numbers} and ASBOs, which have achieved near nothing. New Labour filled the prisons and then just gave up. Dimby does grill her stupidity a little. So does VC, who points out the mental bureaucracy problems caused by target culture policing and politicisation of the police forces.
Redwood blathers away without saying much.Boring. IH makes the sage point about cash amount spent does not necessarily equate to best use.
MH talks about something else, cuts to northerners, and gets his applause. He also says CFs favourite ASBO regulation was a total failure. Flint tries to shout, anger to deflect from her total lack of substance. She is dire this evening.

Q4} Public sector bosses big pay deals.
VC thinks too many people paid far too much. Again Dimbly asks VC why salaries are so high, instead of Flint. JR explains the difference between public/private CEOs pay to blank, mostly public sector staff, faces. IH is right to mention that tax inspectors, the one area of government that actually pays for itself, was the most heavily cut under Gordon, and continues now.
Vodaphone tax question comes up. a long running private eye story.
CF says 'it was an area we got wrong. 3 times she's said this. At least she's honest.
MH is partially right on his pay ratios. 20:1

Q5} should secularisation that bothers the Pope, be a problem.
JR isn't bothered. Me neither.
much the same from everyone.

Audience question, Should taxpayer have funded the Pope. Thankyou old woman, that's the BQ hat trick.
CF waffles on, but manages to plug her own constituency. of course we had to pay for it. We'd have to pay if Kim Jong ill came. Or Obama.

Botogol - welcome back. {BTW-What happened with that note on the car windscreen?} Scores an impressive 4

HG - just the 1 for Marxy Marx Vince. This Week is doing fashion though.

MW - 1 + 1/2 for the Flint. She tried angry serious instead of sultry sexy. Backfired.

ND - just 1. I thought the rozzer shooting story might have scraped on too.

CU - none I'm afraid. can't be anti Liverpool during Liverpool love in. BBC have been there all week. Out in force. Shame about the league cup eh lads. Still, as I said on the football forums, do not promote a one season successful manager too higher office. Wait and see their second season results. Told you!

Winner is Miss S-J with a fantastic
four and a half.

Dianne Abbott just called the Blairites the Adams family? Poor observation. Mandy/Tony/Ali aren't as odd looking as the Milliband she is trying to defend.

Competition open to anyone who can think of a better one.

BQ, thanks for the marking service. I refuse to watch drivel like QT so otherwise I would never have found out. Flinty really ought to lay off the 'angry' and stick with 'sultry'.

I lost by half-a-point? I smell a spot-betting, match-fixing scandal.

BQ - two residents from that road have emailed me to say 'you don't know a tenth of it!'... but no rise from Black Molember themselves. latest update