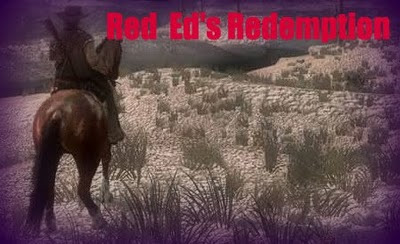 In the best-selling Wild West video game Red or Dead Redemption the main character has to hunt down and bring to justice his former gang members.

Not quite so for little Miliband, but he did do some of the the Redemption bit.
"Sorry about Iraq and all the wars. Sorry about immigration and lack of social housing. Sorry about 42 days detention and closing all the Pubs and Post Offices..and sorry for the economic wasteland and all that..."

He didn't apologise for the poverty gap, the armed forces lack of equipment, I.D. cards, rendition, cash for peerages, Railtrack, stealth taxes, the industrial decline...well the list is a bit long but it was only his first day.

It wasn't an overwhelming performance from the man who is tasked with bringing an end to coalition, but it was good enough. Ed Miliband made a speech to the faithful that went a little further than he needed to. This was primarily a conference speech. A speech that would receive massive media coverage but still a speech to the converted. He could have said he was backing bonkers Harriet Harman's earlier decision to endorse industrial action against any public sector cuts. In fact he distanced himself, however slightly, from the unions.
He could have denied the deficit, but instead he acknowledged it. He had a good line in there too.
He spoke about Labour's undeniably good record on the refurbishment of schools and hospitals.
"I went to school in a leaky port-a-cabin. Whatever they claim under 18 years of Tory rule they never fixed the roof while the sun was shining."

Not bad. Osborne has been using that attack to great effect since 2008. Why didn't someone think of a defence before? Whoever wrote it should feel rightly pleased.

The non-socialist media appear to have given Ed Miliband a sort of cautious..did OK..kind of report. BBC website's tone is suitably supportive. But at the conference John Pienaar was less impressed. I read CU's pleasure at having a 'red' into government. But if I was Cameron I might just feel a bit of apprehension.

The Tories took a decade to admit that they lost votes as least as much as labour winning them off them. It took a decade to apologise for pretty much everything except the poll tax which they'd already tried to neutralise with Major. The party was split over Europe, over spending, over social provision. The votes lost in Scotland have never come back.
Already Ed Miliband is telling his party that if they stay in the heartlands they will not gain power. Ten MPs in the south of England shows just how badly Labour did in 2010. Ed has accepted that. He admitted to past mistakes and talked about optimism. It was pretty vacuous stuff, with no sense of how to go forward or how to become less reliant on a generations worth of tax revenue from financial services. But the fact he acknowledged a problem at all marked a huge change from his predecessor.

Tractor stats Brown could only talk of successes. After 13 years that Stalinist type of propaganda had worn very thin. And to Brown talk of failure was treasonous. Remember he was baited for almost a year by the press who teased him like an unpopular fat kid and tried to make him say sorry. The more Brown resisted, the more they had fun trying to make him. In the end the 10p tax fiasco {that didn't make it into today's apologies but there's still a long time to go} forced him to say a grudging teenage type of 'didn't mean it..sooorreee' and the press moved on. I doubt Ed Miliband will have that trouble. He already knows he needs to present a fresh image for his defeated party. He knows they lost because they were wrong. He is much more likeable than the brooding neighbour from number 11 was. He looks younger, fresher, and seems willing to offer something different, even if he is yet to know quite what that might be.

William Hague had absolubtely no chance of overturning the electoral landslide that Tony Blair won in 1997. Ed Miliband has every chance. He is facing a coalition of two parties holding different ideologies who are forced to make large scale cuts to public services, render workers unemployed and to raise taxes on everyone. The certainty of industrial action will only add to the misery. If Ed stops this rather weak strategy of solely attacking the Lib Dems and instead begins to woo them, while attacking the Tories he will pick up hundreds of thousands, possibly even millions of votes. If he can attack the Lib dem leaders for 'naked power grabbing' while appealing for the left dems to join the
'All new..extra cleaned up, no more war, socially and civil liberty reformed. NLX [New Labour Extra] {now with added fiscal responsibility!}'
he can win back many lost seats. He will lose from the boundary changes but gain from the pain of the cuts.
With good fortune, a tight rein on the more extreme parts of his party and a poor economic recovery he could possibly make his dream of "ensuring that this coalition is a one term government only" a reality.

any mileage in following the lead of Iceland, who are seeking to jail their
past PM for his misdeeds in regard to
bankrupting the country ?

"I went to school in a leaky port-a-cabin."

By the way, my school held lessons in port-a-cabins too. Some of the wooden window frames were rotten, but it didn't matter much, they were windproof and warm.

Our main preoccupaton at that time was getting laid. Not the condition of the school buildings.

Sounds as if you wish it to be so, Bill.

Christ what a dystopian nightmare. Surely Labour have a bit more to do than say sorry - how about all those terrible policies and the war on Capitalism.

Red Ed would surely finishes us and make the next decade aking ot the 1970's at best, probably more like the 1930's.

The worl dis a surreal place, Leeds just lost 6-4 at home to Preston.

Still Brother Dave might put an early bullet in it all if he shuffles off with the Blairites tomorrow.

JH: No, not really. I hope Labour remain out of office for a hundred billion years. But we are looking at politics and political strategy here.
I think his gameplan is to separate left wing yellows, which is most of them, from the orange gang. { Iraq = bad. Civil liberty = good}
This has to be the right strategy for the Labour party. No point alienating the liberal grass roots when its actually them he needs to win.
Labour won't win back Kent in one go.
But the Liberals might. Lab-Lib coalition.. Its a much more coherent strategy.

David Morris: I wish! Certainly in this instance. The booby trapping of the economy when it became clear Labour had lost was criminal. the Queen should have imprisoned Brown in the Tower at the very least.

Anonymous: When I heard him say that I too thought "I bet he didn't". But then I forgot to check. I had a port-a-cabin science lab and geography lab. This was at a fee paying school.
when did a day swap at the local comprehensive we were like Eastern Europeans visiting a Car Supermarket. Their facilities were 50 years in advance of ours. We still had blackboards and chalk and wooden benches. Underneath my desk someone had carved their name and the date 1952, I don't doubt it was real. But credit to Labour for NHS hospital buildings and schools provision. just a shame they messed up the PFI... and did far too much and wasted up to 70% of the billions on unnecessary salaries and administration.

CU : Leeds were 4-1 up when I stopped listening! Some Jonah in the crowd?

Ed can say what he likes and be as clever as he likes with his apologies and distancing. He needs to convince voters that he is sincere, and that is going to be a harder task.

Where was his opposition to all things New Labour when he was in the cabinet and writing the 2010 manifesto?

BQ - I would like to believe that Labour would embrace liberalism, but they can't. It is in their genes that the state can solve all problems. This statism is the antithesis of liberalism. Labour is riven whether it is apparent or not.

This is not to say that the LibDems or Tories are any better; they're not. The LibDems are not liberal. And as for Call Me Dave he makes St Ed look electable.

You remember CMD's 'cast iron' guarantee over Lisbon? The one that became a sincere promise to 'repatriate' powers back from the EU? That then became an acceptance of the EIO?

Even I find it hard to believe CMD can lie this much: I will cheer CMD's demise in a few years. The Tories have sold their gullible supporters down the river.

He's a teenage arsehole on a gap year. Outside the bubble people are not impressed.