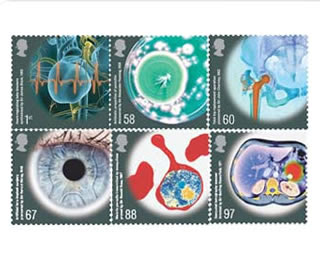 The latest set of commemorative stamps from Royal Mail should come with an extra set featuring pictures of barrels being scraped.

The weekend's competition is to come up with your own set of inappropriate or unlikely commemorative stamps. Capitalists at work offers up
and maybe a special set for Royal Mail themselves.
4. "Memorable privatisations of the 20th century" - so if you see Sid, tell him to enter.
Posted by Bill Quango MP

As someone who has spent a fortune supporting their daughter get a Phd studying medical science - and breakthroughs, I'd just like to say there are too few scientists in the UK as a)they're not paid enough and b)they're not valued. The result is they leave the UK so that the bankers can create the wealth we need in this country!

That should increase tourist numbers a bit ...

"Reward and loyalty cards of the supermarkets"

Anon: The complaint is not against medicine or scientists. The complaint is having a hip replacement as a stamp. Commemorative or special issue stamps are purely a revenue generator from Royal Mail. They frequently feature pioneers of their fields. But usually it is a portrait of the individual. Featuring their work is a less popular stamp, but is frequently covered.

The problem is these stamps are designed be to the set that will arrive on the December doormats of Australia. They are for the organised people who know there are only a few weeks left for surface mail.
Who is going to rush to buy a "Merry Christmas" stamp to send to a loved one with a picture of a CAT scanner on it?
{no joke - that is what is on the 97p stamp}}

The Bruce Forsyth centenary collection must be due soon each featuring a different catchphrase.

Nuclear disasters: Sellafield, 3 mile, Chernobyl. This could be the first "glow in the dark" edition.

The Noel Edmunds collection? Start with "swap shop" 1p and then have decreasing values.

A classic set for philatelists.

How about great pieces of union reform? A stamp to commemorate the death of flying pickets would be a sight to behold.