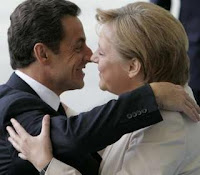 If you have not seen any of the Sarkozy/Merkel press conference yesterday you should at least look at the papers too see what they said. Such an underwhelming performance in a Corporation would have led to a Board meeting this morning and dismissal.

The market and journalists are asking for one thing; clarity that the Countries are committed to the Euro project as a whole.

Instead the answers given were concerned with Germany and France and silly stories about Tobin taxes and the horriblesness of the markets.

A gimmicky stance on the harmonisation of French and German tax rates was taken; but this is a signal for the greater integration of Eurozone Countries. What is missing from the Politicians is the understanding that this is a crisis. The answer in a crisis is not a 10 year plan for Eurozone integration, as there are not 10 years to save the Euro. There may only be 10 months.

Indeed, doomsayers like Ambrose Evans-Pritchard see remarkable similarities to this August and that of 2008 in Europe. He sees a failure to realise the crisis is upon the Euro today. France and Germany are big, but they are not bigger than the global markets and they and the more desperate Eurzone Countries are reliant on the markets for funding.

So, the question has merely been ducked for a few weeks, yet again. However, it does suggest to me that the very poor leadership that we are seeing will be the undoing of the Eurozone. neither Sarkozy or Merkel is willing to tie the future of their Countries to their currency which is an unsustainable position for a currency. The crisis will have thus have a nasty end. Perhaps, the Euro will be saved when it is realised that a disorderly break-up will ensure a decade long recession (for the UK too), but the speed of events versus the speed of political change is too jarring to make this the likely outcome.
Posted by CityUnslicker

Sorry to piss on your chips but the Euro isn't going to be saved--nobody is going to come up with 2 million,million to save it. As for economic union in the zerozone, the Germans will put a stop to that (since they would have to pay for it) whatever crap Merkel talks.

There is a massive constitutional issue here though, and you wouldn't really expect any country to reach the necessary conclusions overnight. People might suggest a stitch-up or at the very least a lack of consultation with their citizens.

If the Euro nations are to "tie the future of their countries to their currency" they need to rewrite their constitutions to hand responsibility for taxes and spending to an outside authority. It's not something that can be agreed at a summit. Europe's democracies have developed over centuries.

What you are asking them to do is impossible. Of course, they should have admitted that when they agreed to set up the Euro in the first place! But it is rather late in the day for that discussion.

What is the correct figure? RBS had it at 3.5 trillion a month or so ago since then its been between 2 and 4.5 trillion, the later the rollover for euro banks over the coming year or so. Has anyone any idea of the current liabilities of the ECB?

Just like 2008 the banks dont know their bum hole from their cake hole.

MR Ecks - I am not in favour of the Euro surving, just discussing the possibilities.

As BE states correctly, the constitutinal time required for states to agree to changes is in months/years but the markets move in days/weeks. Thus a big problem.

IF there was a global recovery this may go away, with a new global recession this problem becomes immense.

An orderly break-up may eventually prove a stimulus much like exiting the ERM did for the UK. Disorderly collapse would be an economic nightmare - much much worse than 2008.

Sean - I think the bank analysts and commentators are very guilty of pulling numbers out of thin air. The top number is equivalent to all the debt of the PIGS countries more or less- so should be a celing!

the constitutional issues: I am no expert and bow to BE & CU (is HG around? I would bow and bow again to her on this) but my observation is that the federasts can be, and are certainly willing to be, pretty cavalier with these niceties when it suits them

when for example the Tunisian / Libyan refugee problems started to get really difficult for the Med countries, I recall one of these bastards saying that although of course they were all bound by treaty, EU law etc to keep their borders open, the essence of the EU was flexibility in a crisis or some such self-serving euro-crap

my reading of most of our much vaunted 'human rights' under these principles is that our liberty etc is guaranteed except when it is decided that some other important interest is at stake: 'public well-being' or 'national safety' or similar 'flexible' notion

and as for the economic rules of the eurozone ...

We could have save ourselves at least one World War and been better off for it.

From this and other recent events.