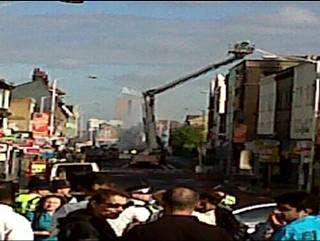 My father can tell you stories of when Croydon burned in the Blitz: as a Boy Scout he was a fire-watcher on the top of the tall tower at Mayday Hospital. He was in the army by the time of the V-rocket attacks: Croydon took more doodlebug hits than any other borough.

We've taken some hits last night, and the smell of smoke was still pervasive in the sunlit streets at 09:00 this morning - because two of the fires were still burning.

The fire in Broad Green that is still being fought (photo - sorry abt the quality) is possibly more significant. Croydon is an unbelievably 'diverse' place, probably because the Home Office immigration centre is here to which all incomers must report. You can see fake passports traded openly on the streets of Thornton Heath (or Fort 'Neaf as we call it). However, no one ethnic group really dominates anywhere, which makes the whole of north Croydon a complex web of inter-ethnic stand-offs.

One of the strengths of the place is that most of the property is in private hands, the Council having long since eschewed public ownership of social housing (I may have had something to do with that ...). Private landlords, however dodgy (and let's face it ...) do at least have a very real stake in their investments; and the Asian landlords who own a large proportion of the terraced houses are quite well organised.

Which brings us to the fires in Broad Green (the pic shows only one of several, the Telegraph has more), which is one of the few areas with a very clear ethnic character: it is Tamil. For years they have been mounting nightly vigilante patrols, and they don't mind telling you which racial group they have taken up their cudgels against: the group that makes intoxicated nocturnal forays out of the mean pubs and clubs of adjacent West Croydon. These particular blazes may turn out to be more than just a by-product of random looting: just a guess.

Croydon attracts all manner of derision, but we sort of felt - hoped - we had the dynamics of this difficult place more or less in a rough-and-ready balance. We'll find out how right - or wrong - we were.

The transformation in that part of London/Surrey in the past twenty years has been astonishing.

We are starting to get it here out West.

Truly, I believe that our population levels must now be in the order of 80millions as the Tesco boss stated a few weeks back.

Alas there is nothing that can be done about this sort of disorder. They've got a taste for it and It will be a feature of many people's lives henceforth.

What really needs to be done is to tackle benefits culture, get people back to work (or in work for the first time), those who shouldn't be here out of the country, stop encouraging single mums and start punishing bad parents.

None of this can be done without a backlash and so it won't be done.

So here it is; sporadic disorder and looting is our future. Crime will continue to be accepted and overlooked after the present furore' has died down.

A never ending catastrophe rather than a catastrophic ending.

I'm glad I had the forsight to get out of London. It's bought me 10 years I'd say. The poor Yokels 'round 'ere don't know what's going to hit 'em.

We have created a monster, in more ways than one.

I am suddenly reminded of the total lawlessness I saw on that Louis Theroux programme about Johannesburg.

Think a block of flats can't be "hijacked" in London? Nor did I.

BE - the line between civilisatio and barbarism is thin. It is why I am most adamant about the troops being deployed and full force used to mark the point that this is unnacceptable and will alsways be so.

To remain free we have to defend assaults on us from criminals.

Calm down CU! If we start putting troops out the headlines in Iran and Libya (and how do you know they don't have a hand in egging this one via social media) will be 'Civil War in Britain'.

If the police need backing up you put a few troops in police uniforms and cover their badge numbers.

Steve that has been done before there were no numbers on their uniforms. You are not becoming a conspiracy theorist are you Steve, I think Iran and Libya have more on their minds keeping order in their own countries, and keeping their positions on the top of their respective piles, than to bother about a few suburbs of London.

CU, this seems to be like a transported William Golding's, Lord of the Flies, trouble is it only takes a few mad oikes in a large group of people to create mayhem, in an estate maybe 1/2dozen families and the estate becomes rotten, it even applies to our so called elite (educationally) as in the "students" taking over the Cons office and buillding they are not all ignorant plebs.

hmmm. well. I don't know what to say, see and hear:

I haven't gone nuts (yet) but intel services manipulating social media to attak enemies is one of my fav conspiracy theories.

'...hasten to Harrogate for an excellent exhibition of Atkinson Grimshaw works..'

Once I would have done just that, ND. Not now. Not ever again in England. Thank you for high lighting the exhibition and realising I would be interested. But everything is changed utterly.

I thought of coming to the UK but we are all here and have no further interest in pretending nothing has gone seriously wrong. If they torch Bloomsbury we couldn't stop them anyway, not even from the Drill Hall. The neighbours have skyped and reassured that all is vile but not torched yet; I would be frightened there as, I am sure, are my neighbours.

We know who damaged our area; on their pathetic bicycles, in their pathetic hoods, without the wit to find something better to do than sneer next to the Boris bikes outside the Brunswick. If you go to Gay's the Word site they're a million times better than the things parading themselves in other people's cultural space. Yet they are not removed despite the ENORMOUS police station in Lamb's Conduit Street.

How would I get to Harrogate? Pay a fortune to risk walking through King's Cross? And to King's Cross. Once I would have gone with interest and happiness and thought of how kind you are to point to it. Not now.

well we must all take care

& the pointing-out was not meant unkindly, or to dismay you with the thought of something out of reach & lost ...

personally I'm not sure what has changed:

- the yout' were already beyond the (virtual) pale
- the left have nothing to offer
- the right haven't dared to make their offer for many a long year
- we knew all this, and how it would end

just now there is a limited, amorphous, apolitical consensus for a bit of a crackdown (reminds me of how the Catholics welcomed the troops in Derry at first): this may evaporate over time & further polarisation set in

and so we await the next macro-socio-political cycle