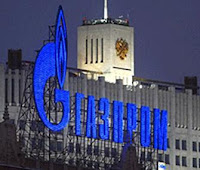 Mr Wendland, a valued visitor to C@W and expert on all things nuclear, drew our attention to a slew of Gazprom news items (11th comment on that post) and sought my views. Here we go then, starting with a collage of quotes.
1. Gazprom defaulting, just as it gets cold ?

Gas supplies from Gazprom "have been reduced to Poland, Slovakia, Austria, Hungary, Bulgaria, Romania, Greece and Italy, [an] EC spokeswoman told reporters" ... "Deliveries were 20 percent lower than what Russia was supposed to deliver under long-term contracts" said French importer GdF. "Gazprom isn’t currently able to meet the additional gas volumes requested by our partners in western Europe" said a Gazprom spokesman. "The state-run company reduced deliveries to Europe by 10 percent for several days because of cold weather and is now fully delivering contracted volumes" a Russian news agency reported ... "Gazprom's main priority is to supply gas to the domestic market", Russian Prime Minister Vladimir Putin said.No-one disagrees that Gazprom is delivering less than requested by European buyers. Now, under the big gas purchase contracts, buyers can ask for amounts in excess of contractual obligations on a 'reasonable endeavours' basis: ultra-cold weather at home would be enough to excuse the supplier from meeting such requests. But the GdF comment (lower than supposed to deliver) suggests it has been worse than that; and "is now fully delivering" from a Russian source suggests that at least for a while they were indeed in default, and that this is now rectified.

Russia has historically bust a gut to maintain its well-deserved reputation for reliability as a supplier to (hard currency) buyers, except when needing to teach the Ukraine a lesson. I'd guess the reasonable endeavours requests are going unmet, though. We'll return to the truculent Putin later.
2. What are the consequences ?

As regards European gas users, it will probably be OK. Natural-gas storage facilities across the EU are full and the situation doesn’t qualify as a “state of emergency” because the affected countries have been able to use natural gas from elsewhere (EC spokeswoman).

This happy situation exists because prior to the cold snap we have been awash with gas for at least 3 years now ! (LNG, shale, recession)

For Gazprom, to the extent they have 'under-delivered' (to use the industry euphemism) against firm contractual obligations, there will in due course be a penalty, which can take several forms including a proportionate reduction to the minimum annual contractual bill, and some scale of liquidated damages which will be deducted from the monthly invoice amount. They may counter-claim force majeure on some or all of these penalties, which will lead to an interminable dispute, probably to be settled in the same smoke-filled rooms where lengthy price re-negotiations are already in progress

(see 'awash with gas' above) under the daft contractual 're-opener clauses' that Civil Code countries go in for.

Gazprom expects a “renewed proposal” from China soon, after failing to sign a contract last year. “We are waiting for a renewed proposal from our Chinese partners, which we feel will be in the nearest future,” Pavel Oderov, head of Gazprom’s department for foreign business, said today. Most commercial terms, except price, have been agreed on ...

Another long-running saga. China certainly aspires to use more gas - but not at any price. In round one, the Russians insisted they bought gas in a package together with Russian manufactured goods, 50:50 by value. The Chinese, naturally enough, told them they could stuff their useless trucks, which caused a bit of a setback. The package idea has been dropped: but Gazprom still insists the gas be priced on an oil-indexed basis, an historical practice now utterly discredited (see 'awash with gas' ...), given that there are satisfactory gas price indices now available.

Mr Oderov's hopes and feelings may not be fully gratified.
4. What's with Putin ?

The usual - he enjoys sounding off. Here's another of his encouraging cold-weather comments.

"Today it wouldn’t be out of place to recall the people who hampered our construction of Nord Stream [pipeline]. If they hadn’t interfered, there would already be a second branch and it would be loaded."

This is the merest knock-about debating stuff. He really does enjoy himself, though - have a read of this performance last year, on shale gas and much else.

What a card. His re-election is assured. One way or the other.

Full storage but do not be surprised to see supplies being resumed on a preferential basis.

Russia grabbed control of the Yamal pipeline in Belarus late last year and is trying to force Ukraine to sell now, giving it total control over supplies to Europe and of course it pushing hard for a rival project to the Nabucco pipeline and trying to keep Azerbijan and states around the Caspian sweet.

China is shopping for gas deals amongst the "Stans" but Russia is fighting hard, promising to buy their gas and build infrastructure - from pipelines to building projects as well as usual tricks like cash and yachts for heads of state.

Europe's cold snap is expected to last at least another week. Long term forecasts say much of central Europe will be below freezing for the whole of February. I ski today.

Only a matter of time before China invades Russia and takes all the territory up to the Urals.

Italy has received 89% of Russian gas demanded,and topped up with gas from Greenstream from North Africa (we didn't supply all those airfields for nothing) plus some use of its fully-stocked reserves, though now it has fired-up two oil power stations at Livorno and Piombino.

It's absolutely freezing (wraps wonderful Russian quilted shawl more tightly round self) any trip outside is likely to be a skating exhibition down the hill, but the power is on and the boilers are firing.

I thought Nabucco was a dead duck.

getting gas from Russia is as good idea as Gazprom always says (on the right terms, of course, but it can be done)

this is not a good idea: although we still get plenty from the North Sea, Norway + Netherlands, we should actively diversify our LNG sources (of which there are a lot)

Nabucco? ... it's really hard to follow all the twists and turns, but yes, it is looking increasingly like an ex-parrot

another triumph for EC dirigisme

Why ever not, ND?

It can't be because it makes strategic sense to diversify our energy supplies, can it?

Come on over to the Nuclear side, you know it makes sense.

I am all in favour of diversification, Budgie, it's a basic principle

but not at any cost

cheaper than nukes for security would be wind + new coal + gas + big increase in strategic gas storage: gas use would be for wind-balancing, (inter alia)

the (only) good thing about wind as a 'strategically secure' source is that one day there will be an efficient means of storing intermittently-generated power: and in the meantime gas balancing will have to do

Until we develop indigenous Shale Gas all we have is (imported) Gas, (imported) Coal and Nuclear. Frankly Wind is fatuous, and without the CO2 hoax would not be an issue.

Wind is roughly twice the cost of Gas (Offshore Wind ~3x) because of the (Gas) backup. Dependency on Wind (grossly polluting via rare-earths) is reverting to the intermittency provided for us in the past via the NUM. So Wind is very expensive and not secure.

A massive increase in storage of Gas will not come cheap, is potentially very unsafe, and still leaves the supply dependent on stable friendly countries and no war. In fact Gas can only be secure if the sources were our own and defendable, unless you are thinking of storing 5+ years worth.

Ditto for Coal. Nuclear on the other hand is cheaper than Coal (OECD 2010 study), and with the potential to store a decade or more of fuel as secure as any generating station can be.