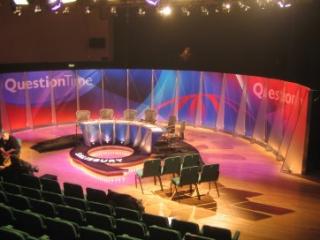 David Dimbleby chairs a debate on the big stories of the week from Rugby.
Joining him on the panel are: Alan Duncan, minister for international.The Liberal Conservative. Once considered a possible PM..Not anymore. Stella Creasy; development; shadow Home Office minister, Another one from Labour who went to a grammar school. She was so  appalled at her special treatment she joined the young Fabians. Mark Oaten, former Liberal Democrat home affairs spokesman; Seems the liberals can't find a current siting MP to come on the show. Fraser Nelson, editor of the Spectator; Not much of a fan of Cameron and not much of a fan of the Euro. Should be fun. and broadcaster and columnist Victoria Coren. Guardianista, but a semi-realistic one. Maybe its her growing maturity? She is someone who usually does very well on QT.

1. Should doctors be allowed strike over pensions? Bonus points if some idiot refers to a £2 billion accounting surplus in NHS pension 'fund'.

2. Should medicine and other professions be made easier for non-insiders to become, that Alan Milburn thingy?

3. U-turn on pasty tax, caravans, whatever next? You can't do a U-turn towing a caravan, so maybe they'll do a U-turn on charity tax relief cap?

4. Hunt, Leveson, that protestor, BSkyB bid, what's it all about, eh?

5. How will the break up of the Euro affect the situation in Syria?

1) U-Turns - a sign of the government being incompetent, fractured, or just listening?

2) Has Hunt exonerated himself?

3) Will Spain need/get a bailout - can the Euro survive it?

4) Doctors pension strikes - given that their mean salary is >100K, will they get any public support?

5) Can profiteering at the Olympic venues be justified?

1. Going on a Bear Hunt
2. Should doctors quack?
3. Would you do the same job for 60 years?
4. Should some, like the unemployed, pay more for car insurance? Then there is the accident and repairs rip off …..
5. U – turns. A sign they are listening or that the civil servants were calling the tune out of time? Send them to sort out Syria. Two birds, one stone.

Should be a good one if I can keep awake.

1. Syria: what should we do give the Russians' intransigence?
2. Does the Greek and now Spanish panic drive the final nail into the coffin of austerity?
3. Is it fair for employers explicitly to prefer state school / underprivileged youngsters over public school toffs?
4. Oh, go on: what's the answer to the NHS Ponzi scheme?
5. Why is Cameron protecting Hunt?

1. Coulson and Hunt. Dave thinks Hunt is safe now. I didn't. but i really don't care. I'm almost welcoming the obligatory NHS question just to get Leveson off the table.

2. James Robertson Justice - "You there! Intern! What's the bleeding time?"
"Time we ensured our pensions were fixed forever, sir?"

Low sympathy doc. As the medical professional said "If you let them attack our wages and our pensions, they'll come for yours next."

So I've less sympathy than the usual angels of mercy, hardworking healers might usually elicit.

3. How many U-Turns is too many?
{about as many as we had had a year ago. Sort it out or call an election. Don't limp on impotently Brown style.}

4. Alex Salmond. is his heart no longer in it? He didn't seem to enjoy marching Scotland on another path. Maybe he realises it might just be down the Greek path.

5. Eu: Grexit, Grout. Will Merkel agree to Growsterity before Spout.

We really are back to the 1980's. the medias obsession with buzzwords reminds me of all that Yuppie, Dinky, Oinks, Nimby crap.

1 Docs and teachers and baggage handlers and tube drivers and Boris' cycle handlers. Is there anyone not planning a strike?

2. Warsi's expenses. Are MPs back at it?

3. Syria. is war the only option, just so long as the Russians agree to fight it?

4. Racism in football. No one go to Ukraine or you'll get stabbed. is this a massive over reaction?

5. Hunt and Blair. Who lied the best?

3. What is this doctors' pensions carry on?

4. Should the CPS be allowed?

5. Syrian deaths, is it all Russia's fault?

Why does David always get the chair?

1. U-turns. Thatcher must be spinning in her grave. Gay marriage may also get a look-in.

3. Hunt in the clear says Cameron. Well, that OK then. Possibly moving onto Coulson.

4. Europe. The pain in Spain probably.

Something scottish for Nelson ? probably not, given how much else is hot: so -

1) some euro-angle: how about - if the Irish are having a referendum on matters euro, can we have one ?

which doesn't leave any room for Murdoch-mania, but there we are. I may live to regret this.

No, no, no, no, nooooooo! I cannot take any more Leveson, Hunt the prat Cameron, or euro cataclysm.

1. Syria: is Assad really Thatcherite? If Toneee is a war criminal what does that make Cameron?

3. Yet another U turn: this time over charity tax cap plan.

4. Dragon spacecraft successful flight. Are governments doomed? (ans: only if you have a spare $300M in your back pocket).

5. Olympic torch relay all over UK (never mind the Nazis).

1. U turns/charities tax/only thing left from the budget is tax cut for millionaires?

2. Doctors strike - was it Israel who asked funeral homes and found fewer people died during a doctors strike? Poss not all bad then :)

4. Hunt/Leveson/Cameron's Coulson being arrested for perjury. Is it all getting a bit stinky or will it all be quietly forgotton?

5. Euro/Ireland/Spanish banks is it all just a Greek tragedy that will end in tears?

[Looks up from a week of work, thinks: what Thursday?, huh?] I'm gonna give this job up -I'm too old for these hours :(

1) Sticking with U-turns and the latest! (Charity donations by those that can actually afford it)

2) New Tax proposals for cars(VED) damn we got too good at this efficiency lark! Best up that TAX immediately. (2030 hah! ha ha!)

4) Euro crisis - well why not Its having one! Greece but more likely all eyes turn to Spain!

5) It's north of Watford so Midlands jobs and stuff will probably come up..

5) Medics but not judges?

First question: After "pasty", "caravan" and "charity" tax U-turns, is the chancellor competent?

On the evidence, we'd have to say no. He was the best of a weak bunch. no longer.

Q2: Is it right for doctors to strike over a pension that most of us can only dream of?

About 30% audience in favour of the medicals. And Victoria who's paper does rather depend on PCTs for its jobs page.

Q3: Would UK be justified in banning Syrian delegation members with connections to Assad regime from London Olympics?

Q4: Do continual revelations from Leveson inquiry put into doubt the personal judgement of David Cameron?
This was boring to a degree i never would have thought possible.

Q5: Are we about to be invaded by hoards of homeless, hungry Greeks? Where would we put them? What would they do?

QT is on next week. No recess free weeks anymore? How odd.

this week top of the table plays bottom.

too easy this week. And they foxed us with the Greek invasion q.

Just me or did anyone else think that was a particularly weak QT?

Again the EU was avoided in the VAT changes debate.

Little if any comparison was made between what doctors are pay and everyone else.

Various anti Syrian comments were made, despite no one having much of an idea what the alternative would look like.

More attacks on the Tories relations with the media, yet no contrast between the suck up that happened with Blair and Campbell running the show.

Q5:
Coren said everyone can come to this country, the more the merrier.

With no comment on the practical implications, and it was unchallenged, absolutely absurd.

Totally agree anon.
Absurd accusations and weak responses from everyone. When Mark Oaten was the best one on the panel you know the show was poor.

{And why weren't you playing? Its the best way to sit through a QT episode... in hope of victory.}

And on twitter it was worse on Syria.
Plenty of we MUST DO SOMETHING! But none of what that something might be?

Yep its very dangerous.
Libya, Afghanistan, and Iraq were probably about the three weakest countries in the region in terms of organised central defence.
I know there are a lot smaller countries but many of them have more modern equipment.

If the West want to go for Syria and Iran its going to be a different story.
Sure it can be done, but I doubt easily enough that we'd see it through to the end, resulting in a bigger mess.

I'm awfully proud of that zero. After all, the game's the thing, is it not?

JH: You're certainly the most consistent regular.

James, you need to drown your sorrows.

BQ, when are you going to declare a pub night?

Nearly forgot to check progress. I do like your new scoring system, I must say.