Best TV Moment For Quite A While 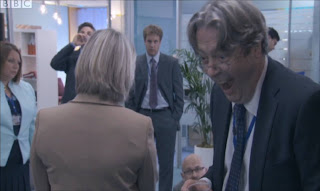 On the subject of TV:  for this moment alone (Thick Of It, finale, 20:50 onwards - what ensemble acting !) I could almost forgive the BBC everything.

Email ThisBlogThis!Share to TwitterShare to FacebookShare to Pinterest
Labels: television

Don't spoil it. Us of the PVR, Sky+, on demand, yourchoice, download persuasion are only on episode 3.

well crack on, Mr Q, it's required viewing for you damn' politicos

as they said about Father Ted: to British viewers, it's hilarious surrealism; to the Irish it's a mildly amusing documentary

And here was me thinking that the best way to quit your job was to shout at the boss 'STICK YOUR JOB UP YOUR ARSE'. I realise now it's so 1990's.

ND - This simply cannot be watched on ordinary TV. The one-liners are so thick and fast (and gut wrenchingly funny) that the pause and rewind facility is essential.

I do not believe that any persons or department anywhere in the world is this quickfire witty.

Otherwise western democracy wouldn't be in the state that it is. And Britain would still have her empire.

Kev - indeed, we have TIVO box & wouldn't be without it

Kev - we have the internet and wouldn't be without it|-). iPlayer streaming was so crappy I just downloaded the episode. Sorted. Geeks rule!

OK hands up: who has at some point fantasised about a Glen-style resignation breakdown?

Luckily, Glen shows how pointless it would be.

on the other hand, I was once (unexpectedly) invited to take a seat in the MD's office with the memorable words: look Nick, this is unfair dismissal, the only question is how much we're going to have to pay you

I had something rather less emollient to say on that occasion