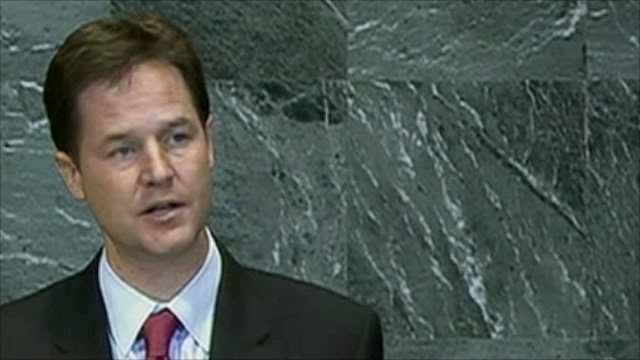 Of the three party leaders, prehaps four if we accept UKIPs predicted success in the Euro elections will be realised Nick Clegg has been the most effective leader.

Now, hold on..Just think about it. A party leader 's job is to lead. And Clegg has led his party.Possibly to oblivion but that is beside the point. The deputy PM has taken his party pretty much to where he wanted it to be. Can the others make such a claim?

Cameron has moved further right than he intended.. He has made enemies of public sector workers he once tried to make allies. UKIP are a permanent threat so he is forced further right than he would voluntarily sail.
And he is forced by his own party. For a Tory government there haven't been as many squabbles and tantrums in the top ranks as usual. Partly this is coalition. Partly there are just less big ego Hezza's and Tebba's about. And the whole austerity vibe discourages grandstanding.
But however its looked at 'the greenest government' ever isn't standing on the space it intended to.

The Miliband shambles of an opposition had no real clue how to market itself after the 2010 wipeout.
But it gained confidence among the riots and protests of 2011 and decided that it didn't really need to do much to be carried back into power on the backs of 'anyone but Dave' protest votes.
Since then the Miliband party has had one or two strategic successes but a lot of tactical defeats and the recent better economic news and the same UKIP surge is pushing the welfare party onto territory that they neither recognise, understand nor enjoy. Ed is not standing on his mark either.

And Nigel too has had to face petty scrutiny for every oddball and racist in his ranks and has quite often been forced to defend areas he would rather not have to. UKIP are in a much more comfortable position than the main parties, but even they can't sit back and talk about Europe and nothing else.

So. Clegg. The winner of the political debates who gained much media attention but no seats for that victory

He had the most difficult job of all. He had to lead his happy little band of peaceniks, eco-warriors, fox cuddlers and academics into government. Not just any government. A government with their sworn enemies.
And .. even worse ..Nick had to reveal that the central theme of his manifesto was a big fat lie. That despite promising NO tuition fees, there would in fact be lots of tuition fees.
Then he lost his ablest minister, David Laws, just a few weeks into office. And then the bad economic news kept coming. And the cuts fell onto Liberal areas. Libraries, Arts, justice, local government. He had to defend all that. And a VAT hike. Something he had campaigned against. His own rival for the leadership was imprisoned leaving him with a difficult by-election and the Hancock spy story emerged and his old rival Vince Cable is forever on his rather ineffectual maneuverings. The Proportional Representation vote was a disaster for the Libs. Their reasons for being in a difficult government were disappearing.

In reality Mr Clegg should have been forced from office within months by scandal, lies, U-turns and a torch carrying mob of angry sandal clad, caftan wearing teachers.
But he wasn't. And the Liberals, despite numerous wobbles and hissy fits, have held up remarkably well within themselves. Their party conferences have MORE unity than usual. the extreme , barmy tendency has been quiet. Liberal voters might have fled, but the Liberal party has remained solid. Well as solid as a party with less spine than a gelatin preserve can be.

Even with the latest groping scandals and threats to sue everyone involved, the story still has the lid on. The feminine wing of the Lib Dems should be being expected to bellow at the outrage inflicted on whatever the yellow equivalent of the sisterhood is by their male powerlords. I'm sure they are. But whatever is going on is behind the curtain. Which is to the credit of Clegg.
The man with the wobbliest party and the flimsiest manifesto and the least reason for being there at all, has managed to keep his show on the road.

I doubt many others could have done it as well.
Posted by Bill Quango MP

What does 'moving to the right' actually mean?

whatever your smoking today Bill, I want some too.

Firstly your view of the Liberals is a false one. Hancock is a prime example. He is actually a town councillor that no doubt saw the Liberals as his opportunity to get onto the council, get his fingers into various planning processes (he's in one today apparently). As it happens he got promoted to MP but still keeps hold of his town councillor job. This is what Liberals do. They are 100% corrupt at local level - that's all they are for.

Clegg is a leader in the same way that Don Quixote was a leader. Except Clegg has learned not to tilt at windmills. He hugs them instead. He's even got his very own Spanish sweetheart.

One other thing, none of LibLabCon want to risk a Lib MP going right now. Lib consituencies have a high probability of falling to UKIP and LibLabCon don't want to risk a UKIP MP getting into Westminster and being credible.

For that reason the rest of LibLabCon are on Clegg's side no matter how bad his MPs might be.

He is lucky in his internal rivals:

- Huhne ('nuff said)
- Laws (neutered by scandal)
- Cable (superannuated)
- Hughes (dodgy past)
- Farron (inexperienced, ultra-ambitious, too much at stake to want to screw up, too well-placed to need to, his prime-time equivocation on Rennard shows clearly enough he's an out-n-out careerist-pragmatist)

of course, keeping them onside has been made infinitely easier by his treachery on the Boundary Commission thing (see this blog passim) which is 95% of what they care about

but no-one will ever be able to turn on him and say: he couldn't man up for the harsh economics decisions

tell you what: if there is a round of coalition negotiations in 2015, he will be an absolute bastard to deal with

he nearly drove Brown to self-harm in 2010, and that was with no precedent or experience to call on, plus a genuine sense of national crisis to hurry him along

I have to declare my yellow streak but Ryan made me laugh if he thinks UKIP can make a breakthough.

Have a look here

The only real change would be Scotch independence as it is the dead hand of the northern reds that maintain the current duopoly.

As I mentioned before, Clegg has been very successful at managing his nutters. Can Farage say the same?

But in a by-election, where protest votes are everything, then UKIP do stand a chance of winning a seat. That in itself might give a greater boost to their electoral chances. They may well not get a single seat in 2015, but they may well upset a hell of a lot of apple carts.

We had FPTP when Labour was created in 1900. By 1924 they were forming a minority government. Sure, FPTP gives a 2 party state, but which two?

You make a good point. To the outside world, Clegg is doing a good job.

But on the other hand, is there any serious muttering within any of the big parties about whether they want a different leader?*

They all seem reasonably happy with what they've got, which might be down to paucity of competition as anything else, as you point out.

* Possible exception The Greens, I think most people would assume that Lucas is the leader, but she isn't.

Alternatively, it may be that the outside world thinks all libdems are very much like Clegg and libdems wont have that much power next time and so who cares...

It's just about power.

The rewards for being in power are so great that MPs will do anything to achieve it. Any party witha sniff of power could be led by an old sock.

Cable tried it on a few times but was never serious. Was he going to fracture the Coalition that had put him in a position of power? His once in a lifetime, impossible gift?

No, the lure of making vast amounts of money, swanning around being impotent, but terribly important, well, it must be Vince's wet dream come true.

On second thought, if you want to moderate that last phrase, fell, free; it's even making me feel ill...

I think it would have been much more fun had Huhne beaten Clegg to become leader.

Cable has only been trying it on in order to keep his red roots fresh.
He knows he will need to show he was a tireless campaigner for equality, redistribution of wealth and social reform in order to get a seat in the Miliband coalition cabinet.