And so it starts with Salmond at the Fore 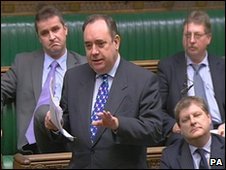 Finally, the UK Election hoves into view as the main chapter in the Nation's life for a few weeks.

It is for yourself to decide how welcome this (I am on hols for abroad 2 weeks of it, lucky me!) for your media viewing habits....

Interestingly though this time is that the minor parties are still far up the agenda. This as we know from the last election means a hung parliament is nailed on. With coverage the minor parties have their Oxygen.

Mr Salmond has led the way with his frankly bizarre rants about holding Westminster to ransom. They are less bizarre when you remember how bitter he is to have lost the referendum and with it his job last year. Now is the time for revenge on those pesky English, the bogey men who cost him his job by not being able to vote for him in an Scotland-only referendum.

So now he remains keen to be as obstructive as possible - he is lucky that with such a and tiny vote base on a single issue, his clarity of strategy is easy. Wind up the English, make it hell for Westminster, appear lefty and populist to garner the votes of the '45%.' Simples.

Rather more of a nightmare for Milliband and Cameron. For them too is the Farage outlier, roundly attacked in the press and every slight mistake jumped upon, the role of traditional English underdog beckons for the campaign. The harder the mainstream try, the more oxygen he gets and his vote base firms up. Plus of course, he can become the English anti-Salmond - always important to be a lucky General.

Meanwhile, Cameron produced a non-budget to save excitement for the manifesto, so squandering his last big set-piece and Milliband, well the less said about him the better (literally true, as Labour is so much more popular than its leader...).

The debates finally agreed have an odd structure but this will suit the Government, with so many and such an arcane format they will likely not have the impact of 2010 - so helping the incumbent.

Still though, the Campaign will be bitter and repetitive with so many voices heard and few of reason amongst them.
Posted by CityUnslicker

I am on holiday too.
Don't tell the whips though.
They think i'm in the marginals.

I (= unabashed Tory) am getting increasingly optimistic

If we win the popular vote but lose government because of the boundaries, there will be Words to be said about Osborne and his wretched coalition agreement fail

An SNP win would have guaranteed a true blue England and Wales - for ever. Alex is one of the most hard-working Tory supporters there is. You should welcome his efforts in nullifying the Red menace.

Why grumble when its less that 10% of the population. Give him what he wants and be rid of these troublesome priests.

The SNP’s great strength in Scotland is its opponents are split between three other parties. Anti-SNP tactical voting might just make their task a bit harder.

Foolish. You should never appear to be taking people’s votes for granted.

says political betting. Those people put money where mouth should be.

The arrival of the Greens is interesting. It means I can no longer say Anyone But Labour.

I hope there's some decent telly on the other channels.

ND - the toxic hatred of the Tories is deeply engrained now by the media, quangos and Lefty parites now joined by the SNP too. I can't see how they ever get over 35% when UKIP are taking 10%+.

I think we (again) underestimate Salmond.

(a) Minority Lab win
- He has just set the frame for the negotiation for Lab
- The scots know they will get a good deal, stuff the rest of the UK

(b) Majority Lab win
- Either Lab policy stuffs the SNP mouth with gold
- Or the rest of Labour get wiped out in '20 and Labour never win in the UK again.

(c) Minority Con win, need SNP
- End of the union or another election

(d) Minority Con win, dont need SNP
- If you had voted SNP instead of Lab, this wouldn't have happened, every cut is the Tory *and* Labours fault.
- The rest of Labour get wiped out in '20

(e) Majority Con win
- Every cut is the Tory *and* Labours fault.
- The rest of Labour get wiped out in '20

He has placed the whole of the uk political class in zugzwang.

No matter what the result is, they are one big step closer to independance.

Today MiliE has promised the end of Tory Austerity, in the same way - presumably - that a vote for Labour in 97, 01, and 05 guaranteed no more Tory Boom and Bust.

I am with ND on this: I think the Tories will easily win the popular vote, should be the largest parliamentary party, and may even win a majority. Despite Theresa's desparate attempts to lose the centrist vote.

But just in case, I am exploring employment opportunities abroad.

O/T but just remembered one from 1940. hearing the news about Tower Bridge and a WW2 bomb discovered reminded me that

Grandma Quango lived in Kilburn, London in 1940.
She was telling me, when I was a 10 year old nipper, how the Narrzees {as she used to say} dropped a mine on her house.

"They dropped mines into the grandma.."

"well..they bloody well missed, then didn't they..dropped it in the garden ..on the pear tree.."

Turns out Grandma Quango was correct.The Nazis did use drop one ton sea mines - battleship killers- during the blitz. And very deadly they were too.

Anyway .. a few weeks later, about 1974 this was, the RN were told of a sea mine floating about in Poole harbour. They took it out to sea and detonated it.

The explosion shook the ground like an earthquake. Myself and Gran Q almost tumbled over. And we were some 5 miles away. All the windows shook.

Gran Quango switched on the radio..and the announcer was saying "..and a ww2 sea mine has been detonated off Swanage by the royal navy..."

Grandma Q turns to the 10 year old Bill Quango and says "That so-and-so..that..Hitler...he never stops trying, does he..?"

Might help for the Tories to lay off the dirty pool now on UKIP and help them steal from Labour. Better to have Tory plus UKIP shading Labour plus SNP.

andrew - I will give you another:

Majority Con win:
- large-scale devo all over UK including income tax powers for fish-woman
- Scotties have 5 years to screw this up

but none of these scenarios factor in the euro-dimension which I think could be critical, & v. complex

overall, if it wasn't for this latter I reckon it's just a play-for-time strategy (incl a few pork-barrel bribes), never very edifying but often works well in the real world

of course someone might tell me the SNP are headed in the SinnFein direction, in which case all bets are off, pull the plug decisively and let the unionist scots emigrate south

Some of your analysis is good, some I disagree with.

Majority Labour Govt means the SNP will not have gained many seats at all in Scotland and their shrillness will look more silly as it becomes even clearer what a small partisan position they occupy.

BQ: Great story, re Grandma. Maybe some confusion over the terminology. Air mine or Luftmine seems to have been generally used for large, parachute-delivered HE bombs. See https://en.wikipedia.org/wiki/Parachute_mine

My point remains that no matter what the result is - Salmond's position moves the SNP a step towards independence.

They may cock up if there is a big Con win and the cons devolve more powers, but if they do it would be an issue with the competence of the individuals (who are moved on) and not the concept of independence.
If they dont cock up they move towards independence as the idea is validated.

If there is a majority lab win, and labour hold fast in Scotland and they don't stuff the SNP's mouth with gold then every pensioner who dies because the ambulance took too long will be the fault of labour and the local quislings who did not stand up for Scotland.

They may sound shrill to you (and me) but they don't care what anyone south of the border thinks. They are shaping their message for the Scots.

This asymmetry means holding on to Scotland will be an increasingly costly and unpopular thing to do.
Labour have to, otherwise they never form a govt again.
The cons are less constricted.

We are watching the most able politician since thatcher (or before?) at work. This is blair in 97, but with a degree of integrity and a purity of purpose.

I emphatically agree 'purity of purpose', andrew - or perhaps single-mindedness / clarity, I do not associate purity with fish-man

I cannot think of a single major issue that Cameron has got right. So why anyone would vote Tory (ND included) is a mystery.

Cameron's last minute bribing of Scottish voters is an example. Whichever way you look at it, it was counter-productive and just wrong: if the bribe worked, it meant by definition that those it worked upon are fickle; it made Cameron (and Clegg, and Miliband) look panicky; it undermines the position of the pro-union Scots; it proved to the SNP that their strategy works; it was a kick in the face for the English (until the last minute addition of devomax for England/English regions - which no one wants).

The Tories fundamental error has been to take their "own" vote (and for that matter the party workers' loyalty) for granted. So Cameron yet again has done the wrong thing: it is almost as though the LibDems were the major party in the Coalition.

Cameron is just another standard-issue dripping wet metropolitan liberal twat; having a coalition with the LimpDumbs has just given him cover to do the things he'd like to do anyway, like please his wife with Green bollocks.

He is Heath mark 2 (hopefully without the cottaging) when what the country needed was Thatcher. All he has done is put off the day of reckoning by doubling the national debt. He and furtive onanist Osborne make Gordon Brown seem a paragon of fiscal rectitude.

SW - I dread to think what the national debt would be with Balls in charge. He was full on turn on the taps in 2011 and no cuts at all.

We would be in a right state. Guess we may find out soon though and then be able to compare and contrast.

As far as I can see the present mob have simply stuck with Alistair Darling's plans. Continuity Balls, perhaps?