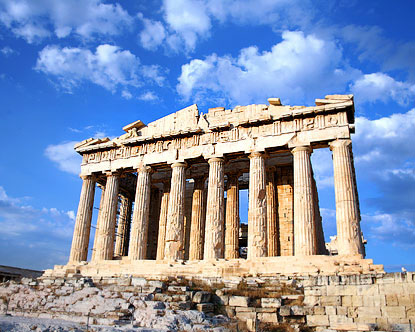 This must be the 50th piece I have written on Greece, but I do find the story so interesting. For so many years I thought it would be Spain that blew up the Euro; it just seemed so obvious, the housing bubble, corrupt Government, total lack of balance in the economy. As it turns out Spain for a while made austerity sort of work.

It won't in the long term and if Podemos get near power then we can expect a Greek re-run next year (just in time for our referendum - better than a present from Santa!).

But Greece has beaten even the Spanish to it. World class tax evasion and Governmental corruption has seen them lead the field. Allied with a intransigence on behalf of Germany to admit even slightly that their mercantilist policies might have something to do with the crisis in Southern Europe and hey presto, Grexit.

For a long time there was to be Euro-fudge. The Euro could not be allowed to collapse, as in 2008, Politics would trump economics. But the IMF have walked now, the Syriza poly of thinking the lenders will come back to the table is in jeopardy (I say Jeopardy because funny things can yet happen at the 11th hour).

More intriguing is now the talk is of Greece defaulting within the Euro. This is a brilliant idea; currency union has failed so let's wipe the slate clean and stay in the same currency union.

Amazing piece of double-think and only in truth allowed because it will save The ECB's arse on the losses in Target Two funds if they all stay denominated in Euro's.

Gotta love the Euro leaders too, saying how terrible and awful it will be for Greece and how they won't be able to fund rescue help. This is first order bullying bollocks by the Euro leaders, showing perhaps they are more scared than they are letting on - an inkling that perhaps Syriza will get their concessions at the eleventh hour?

I do find the story so interesting

yes, it's riveting! I find myself looking up the developing stories online like one does the test match scores when there's no telly available

I wonder if it's the pension thing that galvanises the germans et al. I mean, effing hairdressers allowed to retire at 50 on the grounds of their work being *strenuous* - this adds World-Class Piss-Taking to your other list of Greek championship-winning attributes, it's Monty Python stuff

sadly I am not conversant with ancient greek drama, there must be some delightful satirical analogies to be made

I expect the Greeks to be to,d they must repay the debt. No concessions. All loans must be repaid, on time.

And then the debt repayment timetable being revised to stretch to infinity.
So the loans will never be paid back, but never written off either.

Greece has red lines. No cuts to pensions that a bigger than German pensions.

Germany has red lines. It cannot afford to pay Greek pensions whilst its pensioners are on lower pensions. Politically in particular.

So with those two lines, the Greeks lose.

So its going to be a Greek choice. Ordered or chaotic.

Will that be delayed? Probably. A bit more extend and pretend.

However, its not going to go away. The Greeks are bust, and its their internal creditors that are going to get screwed.

You can't buck that bit.

Maybe there will be another fudge. But it could very easily become one of those situations where there is a huge smash that nobody really wants because all the parties confidently assume that the other side will blink first.

Indeed very interesting; there will be no deal. the Greeks have focussed on the long term as well as the immediate deal - this has brought the process into question. Also funny to see the financial press coming around to the idea that a default might happen - of course they have just parroted ideas without thought of looking at the reality on the ground and reverted to lazy stereotyping.

As to the pension issue. In absolute terms Greek pensions are emphatically not higher than German pensions. Nor are there any other significant "benefits" available. For example unemployment, sickness /illness have no significant payments attached and even healthcare has no comparable state 'gift', unlike in say ... German or many other places in the EU.

In GDP terms the pensions bill has risen - as you would expect from an economy that has shrunk by 25 - 30%, with much of that driven by imposed policy. As well as a demographic skew of population.

As ever "austerity" is somwthing that should happen to someone else - I see the Finns great supporters of austerity for other people are squealing at any suggestion that their benefits might be cut.

The idea that the Germans have got it bad and are paying feckless Greeks to retire early, is to be polite questionable and in actuality an outright lie.

I've said before red lines on pensions is not a Syrzia only view this is what is poltically feasible - even with the old corruption* of PASOK/ND wthis would not get this through.

(*) I'm not suggesting that Syrzia is not corrupt but they so far seem inept rather than corrupt - they do not appear to be looking for the same type of payoff as say a Venislos.

In GDP terms the pensions bill has risen - as you would expect from an economy that has shrunk by 25 - 30% ... As well as a demographic skew of population

true, but that's not relevant to hairdressers retiring at 50, is it hovis?

Are you seriously suggesting that the Greek pension bill is mainly composed of hairdressers retiring at 50 Nick? Pull the other one. It's like saying the UK has ridiculously lax pension rules because Coppers and ex-Services personel get a pension before the main retirement age - true in the absolute but not relevant to the actual picture.

seriously hard times don't, in the same breath, come with inviolable indemnities or opt-outs for anything or anyone - look at annuity rates

Leaving aside how we got here, I find it amazing that Tsiparas is basically asking permission to default. That is what it comes down to. The arguments and negotiations are onscured by the faux-technicalities, but it comes down to the Greek government asking to not have to repay some of the debts it ran up.

And shockingly enough, the lenders are saying err well no because if we give your permission then all the other borrowers will want to default too.

Greece can perfectly well default within the Euro. There are literally no exit paths designed into the treaties. The only challenge is then paying the pensions, and all that, without a central bank. The challenge is to stop all the remaining money fleeing the country.

I can't say I know what happens if an EU country unilaterally introduces capital controls, but I expect the Commission would launch a lawsuit... see you back here in about eight years...

BE - I really enjoy in these situations that the truth is no one actually has a clue. Treaties are complicazted, events were not planned for....can you default in the Eurozone - of course, one can always not pay their debts.

But what will happen then...no idea beyond a huge bank run.

I am not booking a summer holiday to Greece either mind.

I have to back up hovis here... "pensions" is a mis-nomer they get virtually no other form of state support "pensions" is how it is handed out. And the pension often goes to support an entire family not a single person. As I understand from reading, the Greeks are very family focused/based. There is no Granddad obstropoulis sitting in the pub every day spending his pension, the money goes into the family.

As for Default/Bankruptcy I am surprised and amazed at all the capitalists bleating! Those occurrences are built in as part of the system. The banks didn't get the rules of the capitalist game imposed on them which is a major part of the bust being extended outwards. I'm not sure what sort of capitalist game the current "financial capitalism" is, when you aren't allowed go bankrupt.

Greece is de-facto bankrupt. The bank/investors lose. Should be "End Of" but no... the new financial capitalists have to pretend it's not happening.

What group of idiots think they can batter Greece into the ground then hand them 20,000 migrants to house, feed and make well? Huh?

Timbo - no bleating from Capitalists I fear - the bleating comes from corportist and lobbyists. As well as those who fear they are next.

I totally agree the EU comes out of this looking like hearltess machine - still we will lose the referendum! arghh!

"What group of idiots think they can batter Greece into the ground then hand them 20,000 migrants to house, feed and make well?"

GERMANS, that's who. The idiot mercantilists who are driving the EU to hell in a BMW.

Thank goodness for Thatcher's and Major's mistakes in the late 1980s. Apparently Thatch wanted to go into the ERM at *more* than 2.95...

And if that doesn't get you, the summer ferry disaster will.

I'll have to jump in here too in support of Hovis and Jimbo.

The ya-boo-sucks, finger-pointing, Daily-Mail-isms in some of the early posts are pitch perfect examples of home counties Gerontocractic shite.

Whats happening here is very big and very important. This beligerent hand waving from the Germans and posters here is going to inflame tensions and fix nothing.
If Greece moves into the Russian orbit we could have another Ukraine on our hands.
In Western Europe.
In the 21st century.

We need Greece to access the gas in the Eastern Med.
If they get Greece we are wholly dependent on Russia for our gas.
The supply lines from the gulf through Syria and Ukraine are already cut off.

For this reason, if no other, Greece will be solved to the satisfaction of the Greeks - we must choose between energy security and short-term financial security.
Fuck the banks, let em fall.
We've had 7 years of hollowing out our economies and societies to prop them up and they still want more.
The people need energy and security, not banks.

As an aside, anyone wanting to put Greek pensioners to the sword to protect banks and house prices has lost any sense of decency and morality and could rightly be classes as a dickhead.