To ease us through the silly season the Internationally acclaimed Quango Lectures.
Here is a slice from the first lecture. 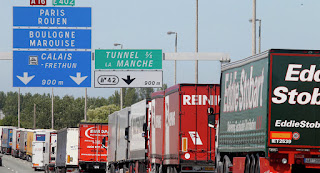 Of those in work 12.9 million are in the category 'low skilled.' Which is some 45% of total UK employment. Low skilled covers entry level trades. Entry level administration. Customer service, leisure, travel, sales. Warehouse, entry level manufacturing. And drivers and the care sectors.

{now we are getting to the numbers we need.- Not easy. Lots of conflicting reports. These are from the official migration report for the Home Office.}

1.2 million low skilled workers are from outside the EU.
1 million are from within the EU

Of the non eu two thirds came to uk more than 10 years ago.
Of the EU migrants 90% have come in the last 10 years.

So the EU migration is a recent event and these migrants are now performing jobs and consuming services and living in accommodation in the UK.

The National Farmers Union, among others, have said that farms could not survive without economic migrants and is a major reason, along with the huge subsidies, that agriculture uses to promote the benefits of EU membership. Farms claim they cannot attract low skilled UK workers even though wages are above minimum wage level.


Conclusion and solution to non-EU immigration.

1. Stop economic migration from the EU. This may require leaving the EU. But as the benefits to our coming decision to withdraw is mostly to other EU nations, they may well decide an accommodation to suit the UK.
2. In place of current EU workers use non-EU immigrants to do the low-skilled, no qualifications needed, basic understanding of English only, jobs in farms and factories. Perfect entry level occupations for low or unskilled workers.
3. The leaving EU migrants will leave accommodation, NHS and school places for the incoming, jobs to go to sub-Saharan workers to occupy.
4. Net migration should remain stable as EU migrants return to the EU, new non-EU migrants fill their places.

The UK can feel good about rescuing and providing new lives from refugees fleeing war, famine, hardship throughout the non-EU globe. The UK will be able to say exactly how many migrants it could take. At present that would be 1 million working migrants and about 500,000 family members.
{These numbers do not include the Romanian and Bulgarian recent migrants, so add another 100,000 at least.}
The UK would be no better, or worse off, on pure numbers, by following this course of action and would have significantly solved the problem of asylum seekers for the next 5-10 years.
At the expense of our EU neighbours coming to work in the UK..

BQ, I think you mean well; and your views are initially beguiling. But .... You leave out the bit about England being the most densely populated nation in Europe. And that doesn't count the (probably) millions here unofficially.

And your repetition of the "I can't get the staff!" mantra takes the biscuit. I have heard senior politicians bewail the "skills shortage" when thousands, no, millions, have been made redundant.

I have even been told there is a skills shortage in my own sector when I have been unemployed. So, skills shortage?, labour shortage? - complete and utter tosh. By your (NFU?) logic when we had 50 million population the UK must have been short of 5 million workers. It is tosh because a smaller country needs fewer workers.

But then British businesses would have to invest to increase our dismal productivity. Oh dear, can't do that, let's employ another immigrant to pick strawberries/operate a press/flip burgers for us instead.

Welfarism, free services and the NHS. These are all draws - either directly or indirectly. It discintentivises our own people to do low skilled jobs. No country which purports to enhance its people's prospects should allow unpointed migration. Being a Tory you will be well aware of what an oversupply of any commodity will do to its market value - especially labour. This is the only reason I can see why you'd be relaxed about uncontrolled immigration.

We don't actually know how many are coming here but it is evident (quite visibly) that it's a lot more than quoted. Water Board (drainage) and supermarket shopping figures bear these feelings out, so too the housing and public services crises - the the real population is close to 70 million.

The spectacle at Calais is but the tip of the iceberg, which the Tories are desperate to conceal beneath a sea of muddened water. I am enjoying the humiliation of this majority Tory government, so soon after the election. Long may it continue and in clear sight of all those chumps who took fright and lent their votes to the Tory party in the silly belief that they were, at heart, on their side.

Let the scenes at Calais continue - for fear that this issue might otherwise be hidden.

Let it highlight that, in times of cut backs, restraint and demands for higher productivity from the little people that our haughty political class, with all its free wine, housing, meals its pensions and salaries can't even manage its most basic duty of securing our borders and protecting the status of its citizens and its culture. And before being accused of xenophobia we don't care much about colour or origin as about skill levels, behavior, work ethic and (please listen this time) sustainable numbers.

What I do loathe is the parasitic Westminster elite. We can have an EU government or a British one - not the both if there isn't to be surplus of meddlesome politicians with too much time on their hands. The work has been outsourced and made obsolete, as with the mines it's time to go.

Supported by the fact that if I want the truth about this issue I won't listen to you half as much as I will a French politician.

Thank you both.
I should just point out that this lecture is what to do about the CURRENT - African immigration problem. As it is today.

And assuming we could get the eu to agree a recall of their citizens.

BQ, excellent article. Perhaps at the same time we could export all our liberal-lefty intellectuals to Caracas?

How about we indulge in some economic imperialism? The Chinese are busy in Africa, may be it's time we invested.

Make a few places less shithole-y, and many will emigrate there first out of ease, plus the UK gets to export things and maybe make use of local materials and UK tax-based businesses can go set up shop there thus money heading towards our coffers.

Yes, it'll cost, and no, it won't be quick, but it's be nice to see a long term solution that'd benefit the country down the road rather than another populist short-term bullshit fest.

How do you know we're not accepting lots of arrivals from Africa? Maybe while this whole debate goes on that's exactly what we are doing.

Immigration - as a policy - has always puzzled me. We know that Whitehall and Westminster have a hand in it, but do we know the actual logistics?

Are any of us actually aware of the bureaucratic and legal mechanisms whereby someone decides that X tower block in Bristol is now going to become home, almost exclusively, to X number of Somalis?

Don't kid yourself that some of this aint centrally planned, and well away from prying eyes.

We need some of the skilled EU people like nurses and dentists. I can't remember the last time I saw a British dentist. There's a different one every time I go and they're all young EU people here who more than likely go home after a few years.

This am on the Today programme there was an item about EU nurses and how some countries eg Portugal are a bit pissed off that they lose nurses every year and the main driver is they can earn 3 times the amount they earn at home.

I'm not so sure it's as simple as you expound BQ. However I would posit that our jails have a disproportionate level of EU immigrants (from Romania mostly) if the police programmmes I see are anything to go by.

Also it would appear quite a few non EU immigrants deliberately lose their papers so it's very difficult and time consuming to get them deported.

I don't know what the answer is but we need to somehow put across the message that the streets of Britain are not paved with gold and immigrants will likely have a horrible existence here with nowhere to live and not much chance of a job etc.

I dont agree with a lot of what EK said,

then the govt isn't really a govt anymore.

At some level this is understood by all.

Blue - On a really bad day I might have thought it was an attempt to entrap me into saying something silly. So far wittier than you can imagine.

The Rt Hon BQ MP is addicted to a Blairist subsidised workforce.

Any true Tory would:

- demand real rigour and availability in our education and apprenticeships systems

NOT be satisified with displacing one source of excessive immigration with another - certainly where it is unselective.

It is a joy, however, to see the majority Tory government being humiliated so early on. They look well out of their depth.

5 years to go. Oh dear. It looks like the music has stopped on their watch. It's a long time to play keepy-uppy with a house-bubble/equity-release recovery with a whole new victim class waiting in the wings to claim welfare when it goes *pop*.

Pensioners have already been betrayed by the Tories. The BBC are banging on about modern slavery in Britain right now.

I wouldn't rule Labour out yet if this pans out as I think it will.

Jan - And we're pee'd off losing our medical staff to Aus/NZ/Can.

You can guarantee that - because they have to pass a points system of entry - our outgoing are better than our incoming.

But are the stats worth a damn?

Well perhaps the Coalition shouldn't have cut nursing training places in 2010. Since then hospitals have needed more staff after the Mid-Staffs disaster, but AFAIK training places weren't restored/increased.

And don't give me that nagombi about the crops rotting in the fields. As a schoolkid I picked strawberries (alongside gypsies), as a student I picked hops.

Now those jobs are done round my way by a bunch of swarthy chaps who come down from Brum in white vans. In the fields they self-segregate - short hair and mustaches (Iraqis? Kurds?) at one end, beards and pugris (Afghans?) at the other. You don't see the job adverts. A few years back there were a couple of stabbings when the beards and the taches had a dispute.

Anon - we did that too. It used to be good Summer work for students.

One should, as always, turn to the Grauniad for its wit and wisdom

in this case, the article is here: