Made Me Laugh, Anyway

Not new; but on Labour List I have just come across this. 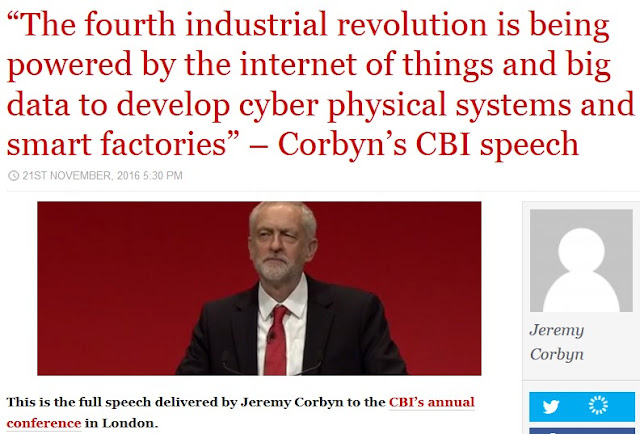 Who wrote that for him ?  Whatever does he think it means?

It gets funnier: "Britain now has the most extreme regional inequalities of any country in Western Europe.  Labour pioneered devolution in Government.  We devolved power to Scotland, Wales and Northern Ireland".  (That's unedited, verbatim - and I don't detect irony.  Or anything, really - certainly not an open mind as regards possible cause & effect.)

Yeah, I remember seeing it when it came out. It's a howler. It's not just the drivel that makes it art but the speech marks. "Quick question Jez, what chew on abaaat?!

"We devolved power to Scotland, Wales and Northern Ireland"

In Scotland and Wales it was designed to entrench power for Labour. How is that working out?

That's the problem with 'cut and paste' Nick.

Any old garbage can be shoved around until it seems to fit, then they wind him up and stand him before the audience.

The whole speech (or as much as I could whiffle through) is of course, the usual bollocks.

Was wondering WTF until I saw it was Corbyn. Sigh.

The thrust of the speech is that Brexit was caused by a lack of equality. A lack of proper socialism - not enough Labour.

No it wasn't. Brexit was a rejection of uncontrolled immigration. Without this we would have buggered on in the EU.

BTW - Corbyn's condescending opener, celebrating women leaders, could be shot down in flames by the Tories who have installed not one but TWO female Prime Ministers to date. Labour has yet to have its first female leader, let alone project one into power. Instead Labour, the sisterhood (and the BBC) goes on dehumanising one of our greatest PMs so as to make the achievement not count. As it happens the monarchists are also pretty good on equal opportunities too.

Labour isn't working. Not on one single level. The Right does everything better.

Because it works in realities and not ideals. Ideals loose from realities enable bullshit such as this speech.

Devolution has certainly failed - SNP showing what their socialist utopia would look like, renewable heating initiative mess (plus the on-going sectarian shenanigans) in NI and anything the Welsh Assembly touches.

However, I don't think this is the whole reason for the inequality. Due to history, we have a convergence of a number of things in the South East (well London - it's just spread) that means the rest of the UK loses out.

Best/easiest fix IMO is to move Parliament out of London (to Birmingham/Manchester) so that it drags some of the 'influence' with it. That'd even things a bit between north and south.

The renovation of Westminster Palace would have given an opportunity to see how it might have worked but the MPs don't want to as they'd have no reason to have the public purse fund their London property empires.

I liked "Labour is open. We’re open to change. Open to new ideas. And open to working with you. In return, we ask you to be open, open to paying a bit more corporation tax".

Not Brum or Manc - why should they take the fall? Move central government to Blackpool or Carlisle. See how many "top grads" want to be "policy advisors" then!

On the point about "policy advisers", I wrote to my MP about the salaries of the SPaDs and got back a crap letter that contained the following line:

"I believe that by clearly separating out the provision of political advice to Ministers, they protect the integrity and independence of the Civil Service".

I'm going to write back and ask what the "political advice" might be as, if it's a question of how the opposition might use a policy against the government, I think the relevant political party should stump up the costs rather than the taxpayer.

Right on Gezza and how did your big Data project the results of the US elections and Brexit? Big Data works in the private sector as it has a precise set of instructions, based on technically accurate evaluations. If falls flat on its arse when it's corrupted and manipulated to meet a political agenda. Bs in Bs out
Oh and by the way mate. It's the internet and the availability of information ( read fake news) that's ripping huge holes in your arguments and making your pally relationship with media obsolete. An old relic like you might want to look into getting that shut down,
TTFN Suff

It's important to understand that most set-piece political speeches are just a list of sound-bites stuck together like Lego bricks. The reason is that the speech is not really aimed at the audience in the hall. In many cases, they will be party loyalists who will applaud anything. When it's a group like the CBI, they will applaud politely and then move on to the drinks and networking that is the real purpose of the event for them.

The real audience is the TV audience, which will always be orders of magnitude bigger than the number of people who read the full speech or hear it in person. But the TV news programs will only play a few seconds of the speech. They will be looking for catchy lines to use, and hostile media organisations will be looking for things that can be quoted out of context to make the speaker look bad.

Therefore, the speech must be constructed as a series of on-message sound-bites, any one of which can be used in isolation without giving a different impression to that which is intended. If you hear or read the speech as a whole it will seem bizarre and disjointed. But the real point is to control how any brief clip will appear when taken in isolation.

That's the kind of speech Corbyn was trying to deliver to the CBI. Where he and his advisers have gone wrong is in using nonsensical sound-bites and in not noticing the obvious contradictions between different lines. So, it's obvious what they were trying to do, they've just done it very badly.


having sat around a number of random pubs in bristol, yorkshire, cornwall,

amongst other things,
Brexiters voted against other people trying to run their lives.

In the vote they voted against brussels.
If you gave them the option, I think they would vote against London.