Its a splendid day for a long, long race today. A day of hope and vision and the chance to grab the prestigious prize of finishing Brexit.
The IRA haven’t yet made an appearance..if you don’t count MacDonald and Corbyn. 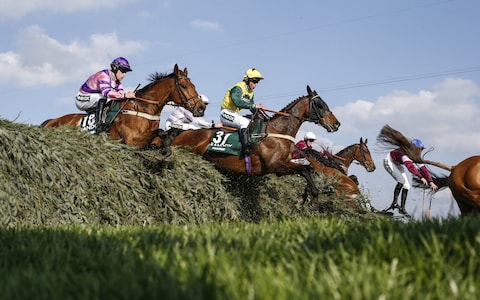 They are under starter’s orders…someone facing backwards..That looks like Jeremy Corbyn’s Remain-er-Leave. Good for an each way bet, I thought..Now we are ready and …They’re off!

It’s Favourite Mogghadishooes leading the pack from BadBoy Boris and Super-Cooper. Followed by Baby Please Don’t Go and Ghost of Blair from the Strasbourg stables. Osborne’s Sneer and No Deal.

And Cameron’s Gamble has gone! Fallen at the very first fence..What a surprise..Strong Favourite Cameron’s Gamble is out of the race..As is Osborne’s Sneer! He has collided with The Maybot. Maybot’s down..No ..wait..Maybot’s still going..Plodding along at the back with Destroy Public Trust and Democratic Mandate, Remoaner’s Tears and .. popular choice ..
Get-The -Fu#k-On-With-It beside ChildernRthe future.. Behind them and falling back is Vince Cable, owned and trained by the Common Purpose Stables, but making no progress at all.

Nigel Farage’s horse, United Kingdom Interdependency has gone into a Batten at Bolton’s Bend.He’s out!

Falling back are some of the big names from earlier in the season. Disappearing into the back markers. WindRush Generation and Grenfell Towers and Anti-Semitic Granddad.

Coming up to Becher’s Brook. It looks innocuous from the take off side but has a steep drop on the landing. Catches many a rider out…And it has. Lots of fallers

Merkel’s Tenure. Her race is over. As is Wee Nicky and the Tartan Army. D.U.P.E doing surprisingly well for such a small mount. But Raab’s Journey, owned by David Davis, he’s gone.

Coming up on the outside is Jolly-Olly-Leftwing..its Jolly-Olly, owned by Michel Barnier, making great strides…He’s squeezing Democratic Mandate up against the rails. Forcing Parliamentary Precedent to collapse and tumble..Jolly-Olly really making the running.

Maybot still plodding along at the back as the others fall out.

And Badboy Boris has fallen! He’s out. As they come round for the final circuit its still Mogghadishooes, Super-Cooper.. then Jolly-Olly-Leftwing. On the outside making the final running, Ghost of Blair, D.U.P.E.

A look down the field to see a few whose race is run.. Brexit-Means-Brexit hasn’t been convincing. Neither has Maybot, still slouching round the back, but still on her feet.

And as we come to the final stretch of this gruelling, marathon race of thorn hedges, unexpected pitfalls and barriers .. thundering down now its still Mogghadishooes, Jolly-Olly-Leftwing, Super-Cooper .. Maybot,  a long way back. Tigger's Pooh, the Anna Soubry owned stalking horse, She's lost her whip.

So... as they head towards the huge the obstacle that is The Chair… Just 500 yards to the finish and ..Wait..What’s this ..The Speaker is waving a red flag..Has he joined Labour?..It seems so..Or maybe its a warning.. Anyway..He’s decided to insist that the race can’t end unless all of losing riders are made winners …

And so.. The whole thing will have to be rerun all over again.
Posted by Bill Quango MP

Osborne's Sneer - ain't that the thing

(you prob don't see the Standard down your way, BQ, and you're better off for it - Genius George's student-politics editorials are truly awful)

I hope you laughed out loud writing that as I did reading it ! We're spoilt here.

I should be at the Bishop's Finger Smithfields 17.30 on this Thursday. I will be with some retiring and retired police (mainly) detective friends - in celebration of a dog handler's escape from the City Police.

I'd be happy to meet any of you personally and apologise in the most profuse way for my bullshit here.

I'll be wearing a blue, long-sleeved grandad top, bald, greying beard, slim, 6' and entirely lacking of any charisma whatsoever. And a terrible memory for names and faces !

(Nick's met me before)

Otherwise AVOID the Bishop's Finger at that time.

Kev, what a blow! I am away this week, otherwise would have been there like a shot

for other readers: Kev is dripping with (subtle) charisma, esp if he brings his guitar

I'll be fresh from my speed awareness course too. Dang !