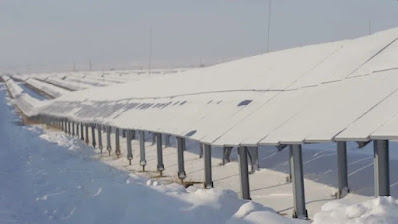 I feel bad to be ragging on the Germans again this week, after all I am quite a Germanophile in actuality. However, as my co-blogger ND writes frequently the Energiewende (which means Energy transition in English) is a real piece of live modelling on the stupidity of politicians to want their virtue signalling to come true.
This past week has seen a deep freeze in Germany and as so often in the European Winter very little wind at ground level. As you can see above, the solar panels are not much use when covered by a couple of inches of snow and the wind turbines are still without any wind. The renewables contribution to the German network dropped to between 0-2%...from a nominal 33% which is what they were claiming last year for the success of energiewende.
Maybe some self-heating tiles would help the solar? Nonetheless, this weekend saw lots of coal back-up coming online in Germany together with some neighbourly calls to France for some of their nuclear capacity which Germany has been so busy shutting down.
If only there was a word for this in English to match the German Schadenfreude.
Posted by CityUnslicker

Not so much "Energiewende" as "Energie ende".

But that's been the left-green goal all along, to wreck the energy supplies of Western nations and end economic growth. Everything they do is deliberate sabotage.

I wonder, what is the German compound word for 'Hypocritical Parasite Country'?

I'm sure that nice Mr Putin would sell the Germans some nuclear power stations at a bargain price.

Here in Western France we had rain freezing on the trees as it fell. It also froze on the helix of each of the wind generators (seven in my commune and nine in the next commune). They were out of action for about 60 hours.

I wish the Germans no harm. Unlike the German government, apparently.

Is thiscwhy the germans still back nordstream2?

The shift back to coal appears to have been accelerated by a mass blackout in December which left 10 million in the dark for a couple of hours. The electricity commission blames an excess of renewable energy.

The blackout started with a fire, but renewable energy was running at a peak of 28% and the system was too unstable to recover:

“In addition, the CFE noted that at that time there was a historical maximum of integration of renewable energy into the national system, of 28.13 percent of the total national energy, which affected the support of the system."

I don't think you need coal, but if you want to go renewable and non fossil fuels, then the base load is nuclear option only. End of.

@ Is thiscwhy the germans still back nordstream2?

Yes, because (a) gas can't be dispensed with for decades to come - just in absolute energy terms, never mind flexibility when the wind isn't blowing etc

(b) Germany has long had a purposeful policy of pro-active "engagement" with Russia, which in the case of Nord Stream even includes going along with Russia's long-term strategy of outflanking the Ukraine gas route 100%

there is a post in that Nick for sure....no warmed pipes for the gas or protection for Solar....disaster!

Will Greta Doomgoblin be known as The Ice Queen ?

Hopefully the power cuts will be before Katie Price gets on Celebrity Master Chef and cooks up a dog's dinner.

"if you want to go renewable and non fossil fuels, then the base load is nuclear option only"

Indeed, which is why the integrated oil companies keep putting out press releases about how great wind power is. Their real competition is nuclear, and they'll do everything they can to ensure nobody talks about it.

The dinosaurs that dig up dinosaurs have got at least another business cycle in them, and it's going to be a monster bull. They don't even need oil to be particularly expensive, especially if they sell a lot of gas too.

China and India beg to differ. Indeed, given their entirely understandable rush for coal, anything we do to reduce emissions in the West is beyond pointless.

Apart that is from destroying our national grids, and massively increasing fuel poverty.

Not to mention that you have to have fossil fuel backup for renewables.

Lunatics truly have taken over the energy asylum. NetZero will bankrupt us, and more and more energy folks are realizing we do not have the raw materials (heavy metals) on the planet to achieve this madness. Indeed, to save the planet it seems we have no choice but to destroy it.

FUBAR doesn't even begin to describe this level of idiocy.

If France had got rid of nuclear what would happen?