Desert Storm(4): the Scud Attack on Israel, and after ... 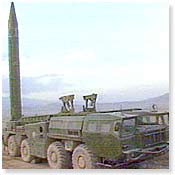 Last time, we saw how the cornered Saddam didn't take things lying down, but embarked on bold 'surprise' initiatives at the outbreak of the shooting war 30 years ago.

It was a creditable effort to redress the balance a bit in his favour.  Both the invasion of Khafji and the Scud attack on Israel can be seen as attempts to provoke the start of a ground war on terms of his own choosing, i.e., before the Coalition forces had fully lumbered into their desired state of readiness.

Not a bad line of thought on Saddam's part, because it was indeed only after more than a month of offensive air operations Jan-Feb 1991 that Norman Schwarzkopf felt ready to pull the trigger on the ground war.  And the onset of hotter weather - not to mention political impatience - was giving his vast, unwieldy logistical undertaking as much of a hurry-up as could possibly be imagined.  So, yes, the Coalition might have been thrown off kilter if Saddam's surprises had provoked ill-prepared ground operations ... and heavy casualties ... and adverse public reaction ...

Regrettably, the Scud aspects of Desert Storm (and after) are one area where I can't recount everything I know.  However, there are still several interesting aspects that don't stray too far from what's in the public domain if you know where to look.  (Hint: the fulsome websites of the US military and CIA, where paranoia about the past is not much in evidence.)

Firstly, we knew what we were worried about and had established a very excellent monitoring system that gave us real-time 'Scud Alerts' - real-time notification of missile launches, and very fast (and accurate) calculations on the trajectory and predicted target.  Such was the state of development of satellite TV at the time, spookily we could often tune in to live broadcasts from Israel and watch the buggers landing, as it happened.

We therefore instantly knew that Israel was a primary strategic target.  (Other Scuds landed on Saudi targets, too.)  We also had rather good coverage of the whole region, of course** and immediately noticed Something Else.  Upon the Scuds hitting home, some 50-60 Israeli aircraft took to the skies.  And you didn't need to be a genius to guess what some of them were carrying under the fuselage.  On the one hand, they would have wanted to keep their weaponry safely off the ground.  On the other, they may well have decided to deploy said weaponry somewhat further to the east ...

The red telephones were buzzing off their hooks.  Manifestly, wise counsels prevailed, and Israel decided to take it on the chin - and not without casualties.  As with several self-denying actions of both the Russians and the USA over the nuclear decades (and probably India and Pakistan, too), you have to say this speaks well for the maturity of international statesmanship when the chips are down.  It's not comfortable to think what might have happened if Saddam had gone for chemical warheads.

Scud-hunting thereafter became even more of a preocupation than it had been before - which is saying something.  Anyone who is interested in these things will doubtless already have read the various first hand accounts of in-country SAS operations.  There was a lot more besides.  How do you hide a Scud launcher?  They are mobile, but really quite big.  Answer: there are cunning places you can use like underneath bridges over roads.  Also, Iraq itself is really quite big, too.  And, as mentioned before, even if you've spotted something on a satellite image, in those days the 100% computerised, 100% accurate locational techniques we now enjoy were not available.

We definitely didn't find them all during the 1991 conflict itself (though we did find all the superguns - a tale for another day).  The Scud story, of course, moves seamlessly on from Desert Storm into Operation Rockingham, and thence into the whole WMD saga that still rumbles to this very day.

** As often mentioned hereabouts, the significance of Cyprus to UK foreign policy cannot be overstated

Only slightly related to this excellent series from Mr Drew, but I just caught a couple of Kytv episodes on YouTube and it got me thinking,

The gulf war really propelled the world into the media age.
24 hour rolling news and big big budgets for news departments. In the pre internet era, this is where Sky BskyB, CNN and others finally came of age and challenged for market share.

Bbc radio had long had a comedy series about an inept local independent radio station called radio active.
Drop the dead donkey, the Murdoch empire’s all about profit, was similar. And the bbc eventually transferred the R4 radio active, to Kytv, for a comedy tv series, about a start up satellite broadcaster ( unnamed but big hint. There was only Sky) in 1989.

It is interesting to watch KYTV early series. Satellite tv is portrayed as bumbling. Unprofessional. Low grade. Profit seeking, lowest common denominator, lowbrow, expensive, and cheap.y made. Brash marketing itself to appeal as The Sun newspaper on Tv,
Which, if I recall it was a bit like that. A satellite dish was not something middle class homes were seeking to posses.

The sneering from the bbc is evident throughout the series. Proper sneers of derision at the callow, chav base, pub drinking, tattooed, sex driven. Fat, wayne and waynetta slobs leisure suited audience for hideously crass TV.

That isn’t to say all those shows were not funny. They were. Radio active, donkey and KYTV are some of the best 80s 90s comedy. Still with a watch today.

But contrast with the later series, the day today, another exceptionally good bbc tv series, that programme indicates just how much the bbc itself had changed its style to be more like Sky, in the years following the Gulf War.

So, a question for Mr Drew. We recall how Norman used the media. Smart bombs and footage we’d never seen before.’ Luckiest guy in Iraq’ crossing the bridge before it was destroyed seconds later.

Did Mr D have any involvement with the media? Contrasted with the Vietnam catastrophe of open media. The very closed Falklands war coverage, gulf war press coverage at the time, was seen as a triumph for all sides.
Did the coalition deliberately feed the MSM leaks? Or was it just a lucky happenstance?

"unweildy". I before E and all that.

Fixed! Thanks, Mark (more usually it's my German that's at fault)

Brilliant stuff. I am in shock and awe.

It makes the paper junk I have pinned to my workshop door even more precious.