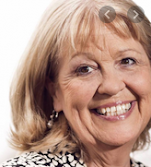 I had rather lost touch with Cheryl Gillan of late, but a number of years ago we were all good family friends and in contact quite a lot.  She was a great lady, and not at all how you'd tend to pigeon-hole a Tory woman Cabinet minister.

First of all, though obviously a good politician in very many ways - and canny with it** - she was not (how shall we put this) any kind of ideologue.  In fact, I can't recall her offering a political opinion, ever.  But, quite genuinely, that's no fatal criticism for someone representing a nice county seat on behalf of the distinctly non-doctrinaire Conservative Party.  And for a Cabinet Minister?  Well, she was David Cameron's neighbour.

Here's a story that I'm pretty sure she wouldn't object to being told.  We were once on a delegation overseas, and a young lady of our number had been getting steadily more annoying as the days went on.  Eventually one evening, Cheryl came up to a few of us chaps who were supping our drinks in the hotel bar, and said:  "The trouble with that girl is   ...   So - which of you young blades is going upstairs to give her a good seeing-to?!"

A Grande Dame - and a grand dame.

** e.g., she very craftily bagged the best corner office in Portcullis House when it first opened - a magnificent view of Westminster & the Thames.  To her, that was politics!

I did exactly that and ended up marrying one of those 'annoying' ladies.

She's as trappy as ever but I love her for it.

As a resident of Amersham, I will follow the advice, 'If you cannot say anything good, say nothing.'

Mum's had her second jab.

I get mine next month and after that me, all my mates and my family have decided that we are going to behave as normally as possible.

Sadly shops and pubs will still be closed and there won't be any events.

We will still have to wear masks and socially distance for at least a year but I'll tell you now that this will be longer.

Even a vaccine roll out beyond wildest expectations will not be good enough for the administrative class which now rules over us.

This rather proves my point that it was never about the disease.

The more crises there are the more money and power the administrative class makes and CV-19 is a Socialist's wet dream come true which is why it won't be ending any time soon.

Why are we taking it ?

Read this and weep.

You are right EK and I predict an imminent 3rd wave which will kill off what's left of retail/hospitality while those in receipt of government largesse are immune from job cuts. It's not only the generous salaries but the massive ongoing pension liabilities we need to concern ourselves with.