The spectacle of Batley & Spen, pt 1 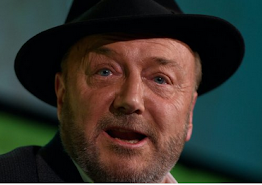 Oh this is interesting, with many facets.  Today I'm just picking up on the Labour leadership thing.  Occasioned by Hartlepool, a few weeks ago we mused over how Starmer's Red Wall travails play with Khan, Burnham and (as a bit of an afterthought) Rayner.

Within hours of posting I ran across some indications that Rayner's personal ambitions were every bit the equal of the others, and her manoeuverings much the more active - she, unlike the two quite hardworking mayors, has no other serious responsibilities (despite her risible list of "official" appointments in the wake of her botched demotion by Starmer) and seems to be on the leadership trail 24/7, with the surreptitious funding to match.

So, two by-elections and a heap of bad-news-for-Starmer later, we come to the next bear trap for the People's Party:  courtesy of George "Spoiler" Galloway, there appears to be every chance the Tories take the seat.  That's what he hopes, anyway.  Anticipating a big opportunity for change within the party hierarchy, knives are out in every corner and neither Rayner nor Burnham are particularly shy of reminding people they exist as alternatives.

You can trawl this stuff all over the place (indeed, troll it too if the mood takes you) but for those who don't choose to sully their browers, as a service to readers let me summarise how many on the left see this falling:

This student-politics stuff is the very essence of Labour and they are welcome to it.  Live by the sword, die by the sword - and great spectator sport it is, too.  For Part 1 of my armchair analysis, I conclude by taking the story-so-far full circle, and musing once more upon Sadiq Khan's approach to all this.  He has absolutely no locus that I can see - far less, anyhow, than Burnham - and it all comes far, far too early for him.  What does he do?  I am guessing there's only one solid strategy: work for (or even just hope for) as messy an outcome as possible, so that it can only possibly be an interim state of affairs, with the can bouncing far enough down the road that he'll be able to pick it up in due course.

Part 2 before polling day itself.  Have a great weekend!  The soccer is a much healthier pastime ...

Looking back to January 2020: Labour missed an open goal by supporting lockdown. If they'd taken a firm stand against it the Beeb would have pumped out Labour propaganda rather than Project Fear^2.

By now Sir Kneel Starmer would be about to break through in the opinion polls and Boris would look like a hen-pecked scaredy cat.

They weren't to know that the evidence against lockdown would firm up quite so nicely but it was the bet they should have made. What have they gained by their "me too" policy? Losing their deposit at the recent by-election.

Now, a serious question. Did any leading Labourite oppose lockdown? How about the tuppeny-ha'penny Trot Mr Corbyn? Was there a peep out of him? (Question expecting the answer 'no'.)

If I were Starmer I’d head for the hills to spend more time with someone’s family.

Labour are dead. They are pointless and do not have a coherent policy in their portfolio. They love self-identity, which nobody else on the planet supports. They love Muslims but hate homophobia. They support women but prefer blokes in dresses.

Labour is going the same way as the Liberal party.

Now that the Tories have become a middle-of-the-road party, which is the way to win elections in England, we need a good right-wing opposition. Maybe the Tories will split.

I told you that Hancock was a wrongun....

I'm not convinced a middle-of-the-road party is guaranteed to win elections. The Tories are picking up votes because they are the least worst option (and yes, I realise that is probably how politics works).

However, a decent socially conservative party would appeal to both the indigenous and immigrant population. All you have to do it ditch all stupidity (identity politics, war on free speech, banning everything, endless government waste etc) and you'd be there.

Problem is that all the stupid parts are what politicians like themselves (and more so to force onto the electorate).

Labour's determination to bury itself is without compare. A big hand to ... Dawn Butler (remember her - she was born with no sex, she said) for furthering this great cause.

"Dawn Butler, a prominent Jeremy Corbyn ally, denied on Saturday she was preparing to challenge Sir Keir Starmer for the Labour leadership, amid claims of a hard-Left plot to replace the Labour leader after the Batley and Spen by-election."

Bring it on Dawn. You have the peoples' full support.

Where has Starmer has gone wrong ?

The truth is that the real working class loath political correctness and anyone who suffocates them in good will by telling them that they need saving.

Alas, political correctness is both a legal ruse and moral entrapment and I'm afraid we're stuck with it until free speech is enshrined in statute law - a new bill of rights.

Unfortunately the Labour movement (and nearly all left wing institutions) control the agenda.

The working class instinctively know something is wrong but are more interested in football, sadly.

(and next week I may)