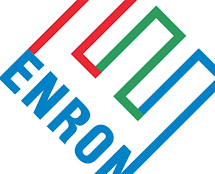 It's the 20th anniversary of the Fall of the House of Enron, folks.  Hard to believe it's been that long.

As this fairly good article touches upon, the influence of Enron on the energy markets (and wider) has always been powerful, such was the enduring solidity of the intellectual and technical innovations it synthesised,  fostered and promulgated.  Energy markets and market participants worldwide are still shaped by the Enron model, even if some don't realise it, and might even resent it.

Even two decades on, many companies don't manage to operate to the superior level of analytic skill and commercial decision-making that Enron achieved.  It had critical mass of excellence and good practices.  If transplanted through time, intact, into today's markets, the Big E would still clean up.  Provided it could find adequate capitalisation, of course - the failing which ultimately did for it back then.  Cash and credit - the oldest and hardest lesson in the book, however whizzy your other core capabilities.

Unsurprisingly, it was a great place to work & learn.  Enron alumni either went on to other great things, or *ahem* to gaol ...

Email ThisBlogThis!Share to TwitterShare to FacebookShare to Pinterest
Labels: Energy and Industry, enron

"a great place to work & learn": I wonder if enough university students intend to work in a place like that.

A young relative started with a couple of years in the consulting biz which he thought a good apprenticeship. He followed that with several years in an international manufacturing company where he learnt an enormous amount from a chap who was first his boss's boss and then his own. Not a nice man but very educational.

The boy dun well ever since. Largely luck I dare say but maybe he also showed a bit of good judgement.

You're right, though: we should add Bad Governance to under-capitalisation. But, like the outright criminality involved in some Enron finance schemes, market manipulation can be laid at the door of remarkably few people. The proof is that almost everybody at the very top held almost all their paper wealth in Enron stock & options. They'd never have done that if they'd realised the extent of the structural rot in the finances, in the last couple of years. I'm not suggesting they ended up penniless, but their wealth was absolutely wiped out. (Many also had their pensions in Enron stock, such is the stupidity of American law and corporate practice in these matters.)

Andy Fastow (gaol), the architect of all that stuff, kept his money in ... municipal bonds!

ND: Take a house point for spelling gaol correctly. The British spelling is becoming something of a rarity these days.

Gaol is for little people said...

How did Volkswagen manage to buy its way out of the mess it made? Without suffering from any real long term damage?
Was it because theEU, ie Germany, decided it didn’t have too?

Germany only upholds the rule of law when it suits (which it frequently doesn't, see my old story abt trying, as a non-German company, to enforce a perfectly sound contract in Bavaria)

hardly the only country in that mode, but not at all the impression they'd like you to have

I have been on gaoler duty many times. I have a picture of me doing it (with hair) looking like Danny Cipriani.

My wife looked like a young Leslie Ash back in the day and demanded that I visit her in uniform.

I'll be honest about my beef with masks now. I don't want my wife's beauty wasted while she's still got it.

So let me get this straight Kev:
You had to visit your wife, who was in gaol, in your uniform 'coz you were at work. Now she is out but still impersonating Leslie Ash? :)

On personal stuff, I am out tonight with the wife (but no uniform) celebrating 50 years married!

On Enron I remembered the cows joke and managed to find it:

Timbo - She said I was a good screw.

Loved that joke btw. A copy of it is now on the office wall.

You don't look old enough Timbo ! I hope there were no hangovers.

As an antidote to "Omicron, oh God WE'RE ALL GOING TO DIE", may I just mention that the total deaths worldwide so far as a result of the terrifying Omicron variant, which is causing health systems to kill over worldwide is

Fear is it's own killer.
More people died from the blackout in 1939, in London, than from bombing.

@
Thanks for the congrats, no hangover Kev just one in the wallet having coughed up for a 12 seat table for the night!