Capitalism Works. It Really Does 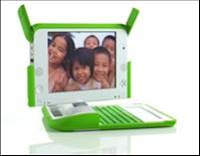 Today’s Grauniad leader “In Praise of Cheap Laptops”, captures nicely how little the left understand about the ways of the world. They praise, but are clearly bewildered by, the fact that a new generation of cheap computers is being developed in response to the limited purchasing power of people in Africa et al.


Big corporations are now piling into … cheap computers for poorer people … in search of "the next billion computer users". It looks as though we may be entering a whole new era of cheap computers triggered by the needs of developing countries. Capitalism works in mysterious ways.

No, guys, capitalism always works that way: driving free-lance solutions for practical problems – the bigger the problem, the greater the efforts and the better the results ! So please take your dirigisme and your ‘picking of winners’, and go … and read this.

Afterthought: I suppose the Kalashnikov works too …

I blogged about one laptop per child a while back after being fortunate enough to see one.
Initially the laptops were available to those in the developed world, but you had to buy two, one for yourself and one for a child somewhere. Seemed a great idea, but it was stopped very early on.
They are incredible things though, and I imagine will be much improved in the months since I saw one.
Bendy Girl
http://benefitscroungingscum.blogspot.com/2008/02/one-laptop-per-child.html

If the left where in charge of developing and distributing laptops to the poor, then I would expect $10000 would be the cost, less $9900 tax payers subsidy equals $100 retail to the third world.

Or am I being too optimistic?

surely its more accurate to say that in this instance capitalism works.

The benefits of capitalism are less clear when a resource is scarce.I was struck by this comment in wikipedia on the Bengal famine of 1876

"the Viceroy first expressed his conviction that ‘absolute non-interference with the operations of private commercial enterprise must be the foundation of their present famine policy.’ This on the ground that ‘free and abundant trade cannot co-exist with Government importation’ and that more food will reach the famine stricken districts if private enterprise is left to itself (beyond receiving every possible facility and information from the government) than if it were paralysed by Government competition"

the result of this policy was 5.5 million deaths. So I guess that capitalism, like many things, works sometimes and other times it doesn't.

bendy - yes, things do tend to advance month by month

(on the subject of advancing, from your avatar I can't tell whether you're coming or going ... please come back again !)

john - no, I think you are pretty close to the mark. Actually it's true of governments of several hues and nationalities

DD - a salutary tale: have you read Sex, Science and Profits ? It's very good on historical episodes of governmental failings

READ THE BOOK! Oh it's so good. I had nearly turned into a red until I remembered why I shouldn't!

Well thank Heavens it got to you in time, BE, I was beginning to worry about you ...

Sinclair ZX81 only cost 50 quid, and that was two decades ago...

Hi,
Recently we had a vote in Blogpower on various issues. We did not hear from you in this regard and since one of the questions was asking the members to reconfirm their membership in Blogpower, could you please do so by emailing JMB at nobodyimportant@shaw.ca? We are using this method of communication since we want to be sure to reach you and perhaps the spam filter ate the other emails. Regards jmb.