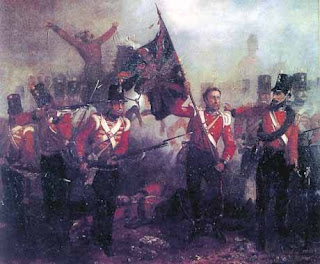 There comes a moment in the heat of battle where the issue can turn on a single hot-headed, individual action. To seize the Colour and rally the troops for a charge was never a deed ordered by High Command.

This is the first politician and political decision I've been able to respect in longer than I care to remember-let's just hope it carries through and he isn't made a fool of for party political gain.
BG
PS, regarding my avatar, I never know whether I'm coming or going either, but glad you like it!

Anonymous said...
This comment has been removed by a blog administrator.
2:47 pm

A very unusual turn of events.
Take note Mr Brown. That is leadership. Setting an example for others to follow, understanding the risks but able to be act without fear of the consequences.

There's that decisiveness that everyone's been telling you about

Jacqui Smith should do the same in a mirror campaign. Then, in the end, we can see who is right and who is dead.

Labour MPs can negotiate policy changes and post parliamentary roles as advisers and quangoistas just by threatening to force a by-election that Labour is desperate to avoid; many have little to lose.

HG - yes, there are several hardened (and imaginative) lefties licking their lips over this

and I'll tell you who else: Ken Livingstone, who knows a thing or two about creative political initiatives

Bill - exactly right. I can only see this in military terms (and DD is a military man): this is classic spontaneous battlefront leadership

If Labour don't put up a candidate they can hardly say that they have won the moral highground on the issue can they?

I am disgusted that so many supposedly principled Labour MPs turned and voted for Brown.

This is pointless gesture politics. It will end in farce.

The time to seize the colours is when everything is going against you and an act of heroism could turn the tide, not when you're winning the battle and the enemy are arguing amongst themselves.

David Davis has achieved something I never, in all my life, thought possible. He has made me think there may just be a chance I could put my X next to Conservative come the General Election. Believe it, that's a massive shift for me personally. I am surely not alone in this.

It's telling just how many politicians on all sides, and media commentators, simply cannot understand how a personal conviction could ever lead to what Davis has done - because so many, too many, are without convictions of any kind whatsoever.

We need people of conviction, not opportunism, in power - and what we don't need are politicians more mindful of their careers than the people they were elected to serve.

Well done to David Davis, his courage is a breath of fresh air! We are under attack as a people, and our self-declared enemies are the Labour politicians presiding over the dismantling of our civil liberties and seeking to control us all. Terrorists promote fear, so what does that make this government? We are afraid to speak, we cannot march for our principles or in protest, we are fed fear for breakfast, lunch and dinner through the media. Enough is enough!

I hope Labour has the guts to stand in the by-election. It may not. But if it does, I am sure Davis will win by a landslide and that will hopefully persuade the Conservative leadership to promise more dismantling of Labour legislation against the people, and not just ID cards and the 42-day detention limit (though scrapping both is to be welcomed).

BE, Spicy - I agree. A large sector of the Westminster Village (including the commentariat) is completely nonplussed, and is inclined to fear what it neither understands nor controls, nor even can predict. Nick Robinson's top-of-the-head commentary betrayed a narrow, utterly 'conventional' thought process quite unable to deal more subtly with what it was witnessing - it did not compute.

DD - we live in an age of rigidly regimented machine politics and, sure enough, party discipline has its place. There remains of course the possibility that General Cameron had a master-plan that has in some way been undermined by Sergeant Davis' bold act. But I doubt it, he is more probably just plain miffed.

Some great commanders, like Wellington, could not tolerate initiative in subordinates. Others, like Nelson, fostered initiative, but only in strict futherance of a well-understood Grand Plan.

The key to the deployment of what Germans call Auftragstactik is that subordinates are perfectly acquainted with the the overall Auftrag, or undertaking, task, mission. It seems to me probable that in this case, Davis considers the mission is to defeat 42 days: whereas Cameron isn't so interested in this - his goal is the defeat of Brown.

If this is so, (a) Davis the SAS man, a loner par excellence, is right - by his own lights - to take this initiative; (b) Cameron, the commander, has inadequately communicated the Auftrag to his subordinate

Or it's just egoistical, freelance troublemaking. Either way I trust it meets with great success. To switch analogies, when the scrum-half makes an unplanned blindside break, the flankers must still hurl themselves forward in support, in case he needs to offload near the try line

The party that needs someone to "Seize the Colour" is Labour. someone has to stand up and say what the principles by which Labour is operating are, and what this means in terms of policies and how they can improve the lot of the ordinary person.

Do you have anyone in mind?