The Limitations of Gordon 'Cnut' Brown 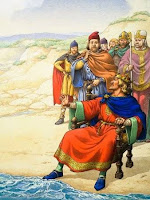 The BBC’s Nick Robinson seems to have reverted to type of late, neutrality cast to the winds, parroting regime-speak. Here’s his homily to Brown’s Cnut-like mission to talk down the price of oil, swallowed whole from a No.10 briefing:

"This Sunday he travels to , for a summit with the king. What's his aim? It is not a short-term increase in the supply of oil and therefore a cut in petrol prices, we're told. It is, instead, to reduce the significance of speculation in oil by City commodity traders.

This is classic Gordon Brown, wrestling behind the scenes with something he genuinely believes is a major long-term problem. It will be fascinating to see what progress he can make in the weeks to come."

Wrestling behind the scenes ? Or (with a little help from you, Mr R) grandstanding in the hope British voters will gather that inflation is Someone Else’s Fault ?

If Brown wasn’t such a cluncker, one might argue he’s doing exactly what Cnut did – putting on a demonstration of impotence to prove to his followers the limitations of his powers. But a deliberate public display of impotence ? Doesn't sound much like Brown to me. More plausibly, he may actually believe he can stay the tide.

Matthew Parris has studied the workings of The Goblin King's mind very closely in his Times columns, and has come to the inescapable conclusion that the GK actually believes what he says. In other words, he is totally insane.

Nick Robinson is a sinny cult.

He's not really a T/Shirt kind of guy.
But there are very many appropriate designs for him to choose from.

Mark - yes, and rather disturbingly Parris says the condition is stable !

dearieme - a bit pleased with himself, isn't he? I though the mask slipped completely in his reporting on the David Davis announcement last week

Bill - I feel they could start a tartan range, no?

Gordon now scares me. As does the fact that a lot of his "agenda" is driven by Jeremy Straw.

As for Nick Robinson, he drives me nuts! He is obviously quite an intelligent man but why he lets Brown sit on him so much is a mystery. It's time the Lobby system was smashed.

Why do the lobby hacks not rebel that the bald coot always seems to get to ask the first question at press conferences? The scintillating Brown/Bush "press conference" yesterday managed to get through all of four questions and I cannot recall when I and the rest of the world watching on BBC or CNN was last fed so much waffle and blethery rubbish in so short a time. Practise obviously makes perfect.

It's got to the point where I regard Robinson's pieces to camera as the comedy interlude. All the gravitas and sagacity of a pantomime dame - and some of the looks, too.

Surely someone in the BBC is having a laugh? Or maybe they are all equally bonkers? Does anything emanating from Al Beeb these days constitute serious unbiased analysis?

Don't ever believe a word they say anyway Mr Drew!

May I respectfully draw your attention to the fact that there is a typo in your headline?

Unknown said...
This comment has been removed by the author.
2:54 pm

Realy nice information of The Limitations of Gordon Cnut Brown. All the gravitas and sagacity of a pantomime dame.