The Scorched Earth Strategy Rolls On 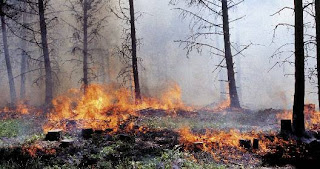 “This is a green revolution in the making... It is the most dramatic change in our energy policy since the advent of nuclear power". (Gordon Brown)


And presumably quite urgent ? Well apparently not.
While I was abroad last week the clunking Renewables Strategy paper was published, as trailed, and it turns out to be merely a consultation exercise, to inform measures that will be put in place next year. For those who believe the ‘revolution’ to be vitally necessary, this is like opening a 9-month consultation in September 1939 on what might be done in response to Herr Hitler’s encroachments in Poland.
Reading between the lines, it’s fair to say the authors of this document clearly have no realistic expectations of the ’s share of the EU renewables target being met ("in a market economy, policy alone cannot guarantee outcomes"). Unlike the ‘legally binding’ approach adopted to the UK CO2 emissions targets - whatever that might mean in practice - no such strictures are being adopted on renewables.
And, let’s be clear, this is another of the Cluncker’s scorched earth measures. This strategy will cost us all a lot of hard £££ (3% of GDP is probably the most realistic estimate), but not just yet. Here’s the key sentiment in the document:
“costs will translate into higher energy prices, but the impacts will not be felt until after 2010 … There will be no immediate impact on bills. The impact will increase as 2020 approaches and our renewable deployment rises, particularly post 2015”
Now, remind me – when is the next General Election to be held ? Ahhh, I see ...
ND
Posted by Nick Drew

Somewhere, there is a stupid bugger in a pub explaining that if we are running out of oil we'll just have to rely on electricity. Unfortunately, he's a cabinet minister.

so it would seem !

ND, at what oil price* (roughly) do you think renewables start to look properly - i.e. subsidy-free - viable for electricity production?

BE - needless to say there's no simple answer to that :+)

Anything with zero or low variable cost (wind, nuc) that's already been built, becomes ever more stonkingly profitable the higher overall energy prices get (yet somehow they still ask for their subsidies ... there really should be a rate-of-return cap on subsidies: remember this when you next hear calls for windfall taxes on oil co.s !)

For renewables that burn stuff (bio-fuels, waste, diseased livestock carcasses etc) it's not the same dynamic at all, because the prices of their 'green' fuels tend to rise with the price of oil

For the full-life-cycle economics of new-build renewables, frustratingly, it's a moving target: the costs of (e.g.) wind turbines are going through the roof because everything that requires energy technology + engineering must compete for the same, frighteningly limited, pool of resources

and of course the cost of debt affects everyone the same, and that's going up too

Mr RW, who comments here on these issues, might have some numbers - but they'd just be a snapshot in time

having said all this, believe me, the renewables industry is rolling in £££ - and they are becoming a pretty ruthless (did I hear unscrupulous?) lobby ... the main thing that holds them back is planning consent ! (which then means even larger windfalls for those who succeed in getting permits, because it keeps the amount of 'green' energy a scare resource)

Interesting stuff Mr D. As ever I asked a very simplistic and unanswerable question. I will be asking another in due course!!

I think coal is the cheapest option now, but who knows what will happen within a few years. My guess is that the current uncertainties creates a high cost of capital, favouring cheap-build gas in the short term. (ND?) It does strike me that the government creating more certainty by regulation, reducing future risk and cost of capital, might usefully help all forms of higher capital cost/lower running cost generation.

For background, using ~2006 costs, the recent anti-severn barrage report annex has a decent comprehensive alternative generation cost estimate comparison, with a discount rate sensitivity analysis. A reasonable intro on comparative costs, but out-of-date I think because of large engineering cost increases of the last two years.

That was last week. This week coal is back in fashion!

Keep up at the back, Drew!

I might prefer to use the phrase " Poisoned Chalice" to descibe the whole raft of legislation coming at the fag-end of Nu Labs dismal administration.
Some, like the abolition of local democracy in planning matters ( to railroad eco-towns and wind farms ) and the demoralisation of the voluntary sector by

are already a done deal; others like the gathering of power within unelected Regional Development Agencies are works in progress ( note how many quangos are being re-designed geographically to match them, everything from Sport England to the Lottery and the Fire Brigade, sorry, Service); yet others, eg 42 days, just about in place and with Harmons " equality " nonsense (which will entrench vast numbers of their clientele within the public services) having plenty of time to reach the statute books ( as Nu Labs response to Multi-Culti being rightly rubbished ) before Gordon is ousted.
Dave will have his work cut out just to list those Acts needing immediate repeal ( after hunting, natch).

Thank you Nick Drew for explaining the economics of the energy debate; btw, I understand that the Russian Mafia are already enjoying huge profits from flogging dodgy 'carbon credits' here there and everywhere.

ps. I could have argued this more eloquently but it has been a long day at the coalface, as it were.

thanks, RW. Yes, gas is always the fall-back when the brown-outs start (easy, reliable, clean-ish, comes in decent-sized units)

my own enthusiasm for (hyper-super) coal is undiminished, Mark

thanks for dropping in, Mr Bloke - yes, Big Dave may well be passed a poisoned chalice. there will be some things he (and Boris) can sort fairly easily, others less so. We've been looking at the scorched-earth business for a while, here & here

can't rule out dodgy CO2 credits, particularly from projects in, how shall we say, Asian countries that have somehow qualified under the various 'mechanisms' linked to the EU ETS. But, remarkably, there are no aspersions yet (that I'm aware of) being cast on the EUAs being issued in any of the EU countries themselves, even though everyone is poised to be suspicious about certain national Registries we could name, but won't ...

"I am sure there are plenty of other more subtle or clever ways they could perform a scorched earth strategy ". C@W May 7th 2008

Golly, you don't suppose that Gordon would drag us into the Euro by way of a leaving present do you ?

Hello!
You may probably be very interested to know how one can manage to receive high yields on investments.
There is no need to invest much at first.
You may commense to get income with a money that usually is spent
for daily food, that's 20-100 dollars.
I have been participating in one company's work for several years,
and I'll be glad to let you know my secrets at my blog.

Please visit blog and send me private message to get the info.