Bear With A Sore Head 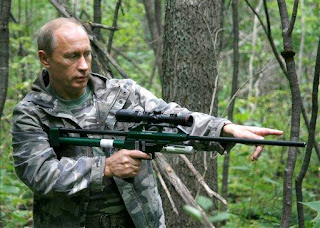 Careful, Volodya, or someone might confuse you with a Bear of Little Brain

There is enough superficial pleasure for bombastic Russians in the Georgia stand-off, for them to be happy for a while. Subtle chess-players though they may be, there was never much subtlety in the political imagery they get served up with, as Putin's public tiger-taming (" 'it's the biggest cat on the planet!' said Putin") reminds us.

But it's all a short-term fix. Russia's ambition is to be a modern power, manufacturing and exporting high-technology goods, respected in the councils of the world. So, whilst throwing around its petrodollar-inflated weight can be satisfying at a basic level, it leaves the big itch unscratched, the big issues unanswered; and worse, it probably sets them back, too. They aren't as good at learning the ways of the world as the Chinese; and now they are in the dog-house.

However ... in the background, Plan B is proceeding almost unnoticed, by way of a fully-developed insurance plan: see this important story (which we may cover in more detail later). Russia as provider of natural resources: it's not how they want to make their future, but it may have to do. It's playing to their strengths and, frankly, it's pretty much all they're good at, these days.

To be successful at this, in the very long run, they must be seen to be reliable. In terms of simple deliveries-on-time, actually, they have been very reliable over 30 years (until gas for Italy got switched off during the chastisement of Ukraine in 2006). But those events, and subsequent actions, have raised the more disturbing question of geo-political reliability.

And here's the rub. When the gas-buying public of Europe thinks carefully about the Russia they know: the Russia that understands only win-lose and trial-of-strength; the Russia that is never defeated or converted or persuaded, but only ever retreats into its limitless depths of surly self-sufficiency ... what could Russia ever do to be seen as politically reliable ?

This will simply fester for many years to come, because Germany cannot wean itself off Russian gas by any means whatsoever in the medium term: and it will do whatever it takes to keep it flowing. Put away the tranquiliser-gun, Volodya, and start figuring out how nations like Norway and Australia manage to be raw material suppliers we are happy to rely on.

Vlad the Impaler next?

Guess the Bear doesn't want a repeat of history. Why not just send them Jeffrey Sachs again, he's fondly remembered I'm sure?

It is a very good question: how does a country build a good reputation?

Britain has worked quite hard to trash its reputation by accepting dodgy deals and failing to crack down on corruption. Compare with former-pariah Argentina which is paying down debt and getting its house in order.

China has managed to become the darling of the West while Russia is poking and prodding and trying to use hard power it is just turning the West the other way.

BE - an interesting question and it exercises plenty of intelligent Russians (I've been asked - in anguished and uncomprehending tones - we know why you won't do business here, but why do you invest in Vietnam ???)

there's something about the Russian psyche that really, really doesn't get it - whole books could be written

Actually, you know what, fuck it.

I will do a proper post on this but what the cold warriors forget (on the Russian side and in the West) is The First Rule of Warfare, that has held pretty well for the last hundred years.

Millitarily, it is a piece of piss to invade another country, especially if you're big and they're small.

Politically and economically, it is impossible to hold on to occupied territories in the long run. The cost of doing so - in money, in lives, in unhappy families of soldiers who've died, in the drain on the economy to support the military spending, the terrorist attacks that you provoke in your own country, the international opprobrium, the trade sanctions, the ignominy of the ultimate withdrawal - always exceeds any short term benefits.

So whatever Russia hoped to gain from smashing up Georgia (and I can sort of sympathise with them) will be outweighed by the long run costs of occupying Georgia. The same applies to the USA and Iraq, BTW. Or Israel and the West Bank. Etc etc.

So sooner or later they will withdraw. And every rouble they waste on that war is a rouble less they can spend on attacking us (in this case, attacking us by proxy via the Islamofascist bastards in Iran).

And they'll have learned their lesson ... for a decade or two before the next power mad shithead in the Kremlin (or in the White House - or the Knesset - or in Tehran or Pyongyang for that matter) - does it again.

10% of oil reserves but 20% of the developed worlds population. So we can assume that if Russia ever became a "developed" country it would become an oil importer. Which puts it between an economic rock and a resource hard place.

Mark - you old Realpolitiker, you

anon - a very interesting possibility (though I have doubts on Russia's ability to re-industrialise on that scale any time soon). Another contributory factor in it becoming an importer is declining reserves and not such good technology (it has just spent 5 years pissing off the major oil co's - although they are all whores and would probably go back if asked nicely - they usually do, hope springs eternal etc etc)

Might mean updating this table - indeed, tidying it up: then all owners of nuclear weapons would be importers ...

Another way of looking at it is that Ukraine is the cause of the reliability problem for Russian gas to the EU, and once Russia finishes new pipelines to the north (Nord Stream) and south (South Stream) of Ukraine reliability will again be as good as in the past.

Ukraine owes about $2 billion for past gas supplies. How many companies carry on supplying customers $2 billion in arrears? And Ukraine negotiated gas at less than half market prices I believe ($179.5 per 1,000 cu m) due to it sitting on 80% of transit capacity to the EU.

This Russian argument seems fairly plausible to me. Is there a big flaw in it?

Obviously Ukraine is in for a tough time when transit across it is less essential. I think transit capacity across Ukraine is about 120 bcm, and the 2 new routes are 55+30 = 85 bcm, so Ukraine transit will still be important though.

the Ukraine is 100% dependent: and more to the (EU / NATO) point, Slovakia's economy is heavily reliant on transit fees because most of the Ukraine-crossing pipes go through there, too

but as I said, physical reliability hasn't really been in question: as I see it, it's the political reliability issue when Russia is (a) feeling cocky - & with a big 'war-chest' of petro-dollars, which has not historically been the case and (b) struggling to settle on a viable, stable, long-term strategy

I'm not sure that Ukraine settling its debts makes much difference in that respect. You are right to point out that Ukraine will be outflanked in due course - this has been Russian strategy for nearly a decade (and, BTW, they way they have gone about it is straight out of the classic Soviet military doctrine textbook, mutatis mutandis: 'fix and outflank', as the saying goes)

there will be some ve-ry interesting games played around the various putative Nordstream / Southstream / Nabucco gas pipelines; and meanwhile, German and Polish grannies will be wondering about their heating bills ...

I wonder what any of the posturing EU leaders mean when they say 'we' should deal collectively with Russia on gas instead of individually ? history is VERY strongly against them

I thought various countries/companies had different 25-year agreements with SU/Russia/Gazprom commiting to a minimum gas purchase level and discount - agreed before expensive pipelines were built.

So some countries/companies probably have better deals with Gazprom from way back than others. Is there any chance that these companies would pool advantageous deals?

On Ukraine, I suspect it could all go sour with Russia again as the price increases from central Asia republics, who now have China as a big customer, roll in. Also they seem to be having an internal political bust-up which the Telegraph reckons will hit EU gas prices!

Mr W - there are indeed many different contracts and they sit with individual companies, few of which are state-owned any more

they have each been modified several times over the years, and continue to be so, as they have various periodic renegotiation clauses

as to pooling them,

(a) Gazprom holds to the divide-and-rule principle, (as well as some contractual provisions ruled illegal under EU competition law - the so-called 'destination clauses' which are designed to prevent re-direction of the supplies)

(b) the buyers - in particular, Ruhrgas (now part of E.ON), the largest, are very fierce in their protection of what they call 'inalienable property rights'. They also kid themselves they have uniquely favourable relationships with Gazprom (= they meekly line up to fund Gazprom's pet projects), which they deem to be a key competitive advantage

they have refused to co-operate with, and lobbied hard against, EU open-market Directives in gas and electricity: so I can't see them jumping to 'pool gas' either !