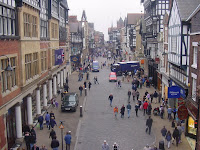 Another consequence of the weak pound is it brings further inflationary pressure from imported items bought in dollars. Not just oil and gas. Clothing in the UK is almost entirely imported. Even companies that manufacture their own ranges mostly do so abroad.

Clothing is mostly bought in dollars from China and India and if the chain stores and supermarkets had not been smart enough to have used their reserves to buy dollars at the high point then the prices would be going up now. However this happy situation can't last and by spring it is expected prices will rise.

Draper's report retailers and suppliers fear that spring 09 prices will be forced up by more than 6% after the pound weakened against both the dollar and the euro this week.

So, no surprise that prices in clothing will rise..except, It IS a surprise!

Fashion wear prices have been deflating continuously at around 3% for two years. And for long periods before that. This was one of the factors which helped sustain that old boast of a 2% inflation rate for 2006-7 .

A 5-10% price hike in March won't help the economy, the consumer, inflation or the MPC. Yet its very likely.

Another reason to doubt that interest rates will fall quite as fast as the optimists are expecting. If the government want the pound to regain some value that will add weight to the voices calling for a rate rise.

The end of the Primark £2 t-shirt? I better run down and buy next week's supply!

I think the pound is now in the classic downward spiral. Raising (or keeping on hold) rates will do nothing to hold up the value of the pound because everyone is now expecting a recession. Cutting rates will make the pound fall in the short term. What to do?

Someone else was saying this last week, who was it - oh yes, it was me.

I think the reason fashion wear has persistently fallen is down to the fact that what most people chose to wear is semi disposable clothing. ie cheap rubbish that is unlikely to last for any length of time. It could be that tastes will change and better garments make a comeback, which inevitably will cost more. (Just a thought)

This leaves clothing in an interesting position. Discretionary items like fashionwear will probably be hard hit, but shops selling wellies, pants, shoes, and socks will carry on as usual. Maybe M&S will see off NEXT after all.

BE. Nah.. Primark are the giants and they will have been best placed to hedge the currencies and so restrict the £-$ increases. More likely are the smaller chains who buy a bit later [ie now for summer 09]and don't shuffle money into different currencies or have arrangements with the big banks.
More likely USC,Bank,Republic MK One etc will be looking at higher prices or smaller margins.
Of course smaller margins usually means job cuts in retail.

Barry: Its a theory! But for many years the Higher end has been pushing quality over price. If anything the quality of clothing and shoes and apparel in general will decline

Anon: If only that were true.
UK retail sales volumes dropped in July at the fastest pace since comparable records began in 1983, with 61 per cent of retailers reporting lower sales than last July.
Among them..Next.