Brown Has Reduced Us to Junk - The Markets Speak

We've looked at RBS preference shares before as an indicator of how the UK is viewed. Yesterday they provided another salutory perspective.

On Monday, the Government effectively took over RBS, swapping the 12% prefs it took 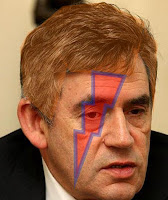 in October for ordinary shares. It's UK plc that stands behind RBS obligations now, and nothing else. RBS ordinary shares tanked, of course, but it was a holiday in the USA, so no trading there.

When markets re-opened, RBS regular dollar prefs (nominal 6.6% issue) fell more than 57%, and now yield 35.7% ! That's a measure of international confidence in our ability to service our debt.

The Man who Sold the Gold has reduced us to the merest junk.

I might take a punt on those. what are the risks?

not an economist said...
This comment has been removed by the author.
2:29 pm

The investor Jim Rogers has openly said he would not now invest in sterling. See this link here:

The actual quote from Mr Rogers is:

“I would urge you to sell any sterling you might have,” said Jim Rogers, chairman of Singapore-based Rogers Holdings, in an interview with Bloomberg Television. “It’s finished. I hate to say it, but I would not put any money in the U.K.”

He also predicts imminent catastrophe for the US economy aswell, the more so if Obama's planned bailouts go ahead. On account of this he moved his entire family to Singapore a few years back.

Obviously you can dismiss him as just another bow tie wearing speculator if you wish.

"The Man who Sold the Gold has reduced us to the merest junk."


At this point - if I were Gordon - I would be clenching my buttocks until they started to bleed, gripping the table with a force hitherto unheard of and just generally crapping myself. I mean - you have to admire the guy for the way he just keeps smiling and laughing and joking with interviewers like Andrew Marr last Sunday. When asked about the staggering levels of debt in this country and the govts encouragement of us to go even further into debt he just larfed, smiled and said "Ooooh Andrew you are being a tad puritanical there ...."

I take your point but I don't think it's entirely a fair reflection of foreign investors view of the UK Government.
The main fear seems to be the risk of RBS being fully nationalised with the private shareholders only being compensated of between 1 - 10p.

ACO - well no financial advice from this blog, natch: but IMHO the medium-term risks are (a) default on the quarterly fixed divi payments; (b) illiquidity in the shares; (c) FX risks of something denominated in $, if you are a £-based investor

as far as I know, they've not missed a payment yet, so the upside would be that, once 'everything settles down' and investors see no serious prospect of such a default, they would go back to trading at a more normal yield. They've already shown the potential to double in price, because they were down around $5 before, then back up to $10.

Again, as far as I know liquidity has not yet been an issue.

NOE - Rogers is worth noting, he's a commentator many folks follow. As for Brown, though he seems pretty thick-skinned, there must surely be the possibility it gets to him eventually

Sean - welcome. I accept the risk on the ordinary shares is as you say: but the risks on the prefs are different (see reply to ACO above) and relate to perceived likelihood of default on divi (etc), not nationalisation

and default relates back to UK plc, in today's circumstances

It has been said that Alastair Darling has held a lifelong Marxist ambition to nationalise all the British Banks. All part of the 'Big Plan' to turn us into a Stalinist State.
The RBS debacle could well lose this dupliciticous, lying, thieving, arrogant Government lots of votes North of the Border...
It'd be wonderful if Brown and Darling lost their seats in the next Election...A tantalising prospect!

Yes I agree. I have a lot of respect for him. And others of his ilk like Schiff and Ron Paul. My flippant comment about the bow tie was a sarcastic reference to the way these commment of Jim Rogers were dismissed on a message Forum I happened to end up on this morning.

Forgive my ignorance, but is an exchange of preference share to common stock a 'debt for equity swap'?

If so why not force all debt holders to swap their entitlements for common stock and hence rebuild RBS' lanace sheet?

Make the bond holders do this by threatening administration/liquidadtion.