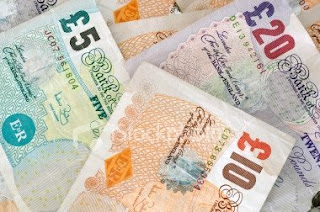 Numbers seem to be getting smaller these days. Used to be that £1 million would last a footballer all season or count as a decent bonus for a bank exec.
But since Northern Wreck the talk is of Billions. Trillions of Billions of toxic debt.
But what do these sums actually mean. Can they even be comprehended?

If you start counting now, out loud, "One..Two.. Three "without pause, you will reach the number 1,000,000 around about 1pm on Tuesday the 16th February, and you will have missed valentines day.

So, today class, and in a departure from the usual national multiple choice curriculum,
how long would it take to count to
A} 1 Billion
B} 1 Trillion

And part 2.
The UK treasury expected to have to borrow only an EXTRA £118bn for 2010.{exceedingly unlikely to be that little..that was the November '08 fantasy amount} Excluding interest, how long would it take to pay off just this extra borrowing at £100 a second.{Answer. Depends how quickly you can get the printing presses to run}


To pay off a trillion pounds of debt, at a pound a second, would take about 32,000 years.

Special relationship and all that.

Yes, I just added the last bit as my researcher said "But our billions are different" and wouldn't have it until we googled a host of sites. In the end had to say "Who's the boss" to get consensus.

Even the comment leavers on this from The Guardian how big is a billion disagree wuth each other.

however best seems to be
"In 1975 Chancellor Denis Healey announced that the treasury would adopt the US billion thenceforth."

Quite: the treasury swapped and so it made sense for everyone else to. Who the hell else uses billions, for heaven's sake?

Liras, that's what we should count pounds as. It's quite easy, just move the point along when inflation generates a few more noughts.

There must be, I think, a number to which it would be impossible ever to count before inflation trebles it...:)

A little like NINJA mortgage holders ever managing to begin to repay the principal on their loan.