Watching The Lights Go Out (3) 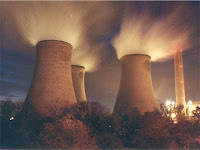 What's this, I hear you ask, are we saved ? Was Drew just doom-mongering (again) ?
4 gigawatts of lovely new capacity !

Calm down dear, it's only a government press release. 'Section 36 Consent' is permissive, but doesn't commit the holder to do anything - any more than EDF is committed to building new nukes (sorry Gordon, but they ain't - ask your brother). It's valid for 5 years and is, in effect, a free option to start building a power station in that timeframe. So even if any of these go ahead, with a typical 3 year construction period they could be starting up as late as 8 years from now. The crunch comes a lot sooner than that.

All these permits betoken is that the three putative developers like free options (as do we all), and anticipate (as do we all) that the price of gas is going to fall, but the price of power won't fall by nearly as much, if at all - because generating capacity margins are declining.

And worryingly so. The government (when it isn't totally absorbed by sourcing new mobile phones for Brown) knows perfectly well that renewables and nukes are a bad joke, and are hoping upon hope that [a] developers will rush through the only things that can provide reliable electricity quickly and plentifully enough, viz gas- or coal-fired plant; and [b] it will mostly be gas, because the greens (wrongly) hate coal - see the lame rider at the end of the press release ("gas fired power stations produce less than half of the carbon emissions of traditional coal fired stations" - true but irrelevant).

But isn't there an optimistic angle - mightn't they start developing right away, so the new 4 GW is available by 2012 ? Certainly, the government would hope so - they are already planning 2012 power-cuts in the London area to ensure the Olympics get an uninterrupted supply !

But there's a strong reason to believe these 3 permitted stations won't be built any time soon. The prospective developers can't hedge their energy price expectations - i.e. they can't lock in declining forward gas prices and more robust forward power prices; and they'd need to do this in order to secure finance. That they can't is partly due to the credit crunch; but also because, when the government allowed EDF (Gordon's brother again) to buy BE, they accelerated the malign trend towards vertical integration in the electricity sector. This has trashed liquidity in the power markets, making long-term hedges as rare as hens' teeth.

So - the French get BE; they commit to precisely nothing; a power crisis looms; the power market is hobbled. Ah, what it is to have a financial genius at the helm.

Email ThisBlogThis!Share to TwitterShare to FacebookShare to Pinterest
Labels: EDF

Am I being paranoid, or is the government intent on totally destroying the economy? If we don't die of hyperinflation we will be killed by a lack of energy. We are already an international laughing stock, will our allies soon have to start dropping food parcels on London?

I fear we get the government we deserve - so we must suffer the consequences. But Britain has suffered worse in the past and we can recover again!

Here is the Weetabix plan for putting the "Great" back into Britain.
1. Abolish the Bolshevik Broadcasting Corporation. These scumbag trots have been subverting the nation's culture & morals for too long. Enough, By God, and be gone.
2. Eliminate every last quango. Think of the savings, and we'd never have to listen to "Dame" Suzi Leather ever again.
3. LEAs abolished & a voucher system for education established.
4. Bring back proper A levels & O levels - sort the wheat from the chaff. The culture of "all must have prizes" must be replaced by meritocratic elitism. I am sick & tired of interviewing alleged graduates who can barely write their names, aren't numerate & cannot be trusted to sit the right way round on the lavatory.
5. no more government ads for the Guardian. Laugh as it sinks taking Polly Toynbee with it.
6. Pass a law saying no EU regulation can go into force unless ratified in Parliament.
7. Sack 80% of the administrative civil service. The devil has been making work for idle hands there.
8. Re-establish corporal punishment for yobbery. It will discourage recidivism, provide employment for sadists and not require us to fill up the prisons. Yobs don't fear the law now - let them fear the lash. It works in Singapore, it can work here.
9. Simplify tax law. Flat rate of 15% on all income.
10. Abolish this climate change bullshit; CO2 really isn't that important as a climate driver, though it is a handy tool for infantile leftists to control us. Open the coal mines up, achieve energy independence, and give work to scrofulous Northerners.
11. Let the banks go bankrupt. Whack up interest rates (per the Austrian-Libertarian school) and get the pain over with as quick as possible.
12. This devolution nonsense must be reversed. Plebiscites for the Jocks, N. Micks & Taffs with 2 options: A. parliamentary democracy as we used to practise it, or B. complete independence. In or out, you choose.

I daresay no one will vote for it so a military coup may be the only option. Naturally, if called upon to serve I would humbly accept.

Why should EDF take the risks when they don't have to, as you say a free option. No, far better to wait until the lights are going out and then blackmail the Govt into providing more state aid and guaranteed prices.

Another fine example of privatising profits and nationalising risk?

Where in the name of the wee man do they think they're going to get all that gas from?

Mr. Putin must be rubbing his hands; another sucker into the web.

BE - we should warm up the Scorched Earth thread again

hyperinflation or hypothermia - not a nice dilemma

SW - a bold 12-point plan sir, apply to Mark Wadsworth for a seat in his cabinet (employment for sadists, eh ? didn't know they were sitting around idle)

GS - I fear you may be right, most of these are subsidy-wallahs at heart

Anon - actually, I don't worry so much on that score - see here and here

Siemens are so impressed with the great nuclear powered future that they intend to sell their 34% stake in it (Areva NP) because of "lack of exercising entrepreneurial influence within the joint venture". Anything to do with the 38 month delay on the Finnish EPR they also mentioned in their accounts? And that the Finns reckon they are entitled to 2.4 billion Euros damages for the EPR delays?

Trouble is, will the French let Areva's EPR push fail? Could they put up the money somehow for BE still to buy a couple? Either way we're well out of that - I hope.

So gas it is. Have you seen any projections for future UK leccy demand? I'd think it must be flattish with big uncertainties. With such projections gas plant does make a lot of sense.

ND: Talking of subsidy-wallahs, I see Rio Tinto are being given the shove on its super-cheap deal for 255 MW of leccy. Anglesey Aluminium will finally shut down. The price was so low it has never been disclosed - or at least the Nuclear crew would never disclose the price in FOIA documents. A decent sized bite of our £73 billion decomissioning bill could be put down to this RTZ deal.

That's a small power station worth of power saved.

This is criminal mismanagement of the nation's energy security. Govt spending in real (GDP ajusted) terms is now £185bn a year higher than when they took office in 1997.

I've never experienced a government more foolishly enslaved by electoral short-termism and so wilfully myopic to the primary duties of government - the security of the nation.

There's not enough Hempen Rope in the swindleries for this bunch of crooks.

ND, I must say I like a lot of SW's manifesto.

So what's the answer to the looming power cuts? Is it as simple as giving companies permission to build new coal fired power stations, telling the Greenies to f*** off and scrapping subsidies for nukes* and windmills?

I suspect it is, supply, demand and all that, but have you updated your energy manifesto or is your previous one still the current state of play?

* Which may well be economic, even without subsidies, in which case great, bring it on. It's just that whoever is doing the cost-benefit analysis has already made up his or her mind beforehand and tweak the assumptions to prove their prejudices.

they are already planning 2012 power-cuts in the London area to ensure the Olympics get an uninterrupted supply !

Scary stuff! Can you elaborate?

Mr Enland - temperature-corrected UK gas and electricity demand is falling (slightly) in the residential sector, for the first time EVER

and none of this is by virtue of superior insulation !

Any uptick must await an industrial revival ...

Anglesey is interesting, thanks - I hadn't spotted that one

Raedwald - can only agree. perhaps you saw this earlier post lauding a real politician's way with the energy industry

Mark, we've had Energy Manifesto discussions before, so you know my answer (which certainly includes scrapping subsidies, and gas, and new-generation coal)

ND: I have read claims that the 255MW for Anglesey Aluminium is counted toward the standing reserve, as the grid can easily and cheaply call for it to be switched off. So I'm not sure what impact shutting it down will do to future plant replacement needs. It should make for a noticable small dip on industrial demand projection charts though!

Yes - but just one among several, at the moment !

on the wider point, almost every nation has historically mandated sweetheart energy deals for its 'strategic' industries (alu, fertilizer etc)