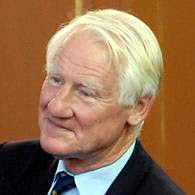 This is Baron Butler of Brockwell, a decent and much-honoured man, who will go to his grave regretting that he failed to speak more plainly in his 2004 Report on the UK's intelligence failings prior to the Iraq war.

He'd hoped that his habitual Mandarin- speak code would make his findings clear. He realised immediately he was wrong, and that the Guilty Men had thereby been let off the hook. It haunts him still.

Today he has done his best to repair that mistake. In the circumstances, it's not a bad effort: and over the months to come who knows ? it might even rectify the situation rather well.

Perhaps the Guilty Men may yet be deprived of the honours they still seek, and be plagued by the restless nights they deserve.

Rubbish !! He was Mr Whitewash from the begining he just got found out.

If my memory serves me correctly he did a whitewash job for Thatcher.


Rubbish !! He was Mr Whitewash from the beginning he just got found out.

If my memory serves me correctly he did a whitewash job for Thatcher.

The Butler review never got to the heart of the matter, and Blair quite simply got away with it. These government reviews always come under huge pressure but when it comes to going to war, they should never have left any stone unturned.

The robustness and accuracy of Lord of Appeal in Ordinary-speak is preferable to mandarin-speak when it comes to inquiring into the genesis of illegal wars.

But why do I have a faint Gilbert and Sullivan echo about official-speak in all its nuances at all?

Any enquiring mind can find all about the attack upon Iraq in any decent university library. A re-opening of the inquiry into the death of David Kelly would rivet attention though.

Too little, too late. We are all now paying the price. And there is not enough water in the Tigris and the Eurphates, because the Turks and Persians are taking too much.

Yes - terrible drought in Iraq, a biblical plague of snakes, and the government has - well, who would believe it - decided to sell ALL its oil interests to foreign business.

As for David Kelly. I have no doubt he was murdered, no doubt at all.

When did Campbell have his breakdown? Perhaps a little Blair-authorised waterboarding for Mr. Campbell might be in order

Comments seem to be disabled on the VAT post, so let me point out a few misconceptions:

The VAT cut cost nowhere near £12.5 billion - a third of that comes back in higher corporation tax receipts, and at the margin, where a business would otherwise have gone under (and not paid any corp tax, VAT or PAYE at all), the cut might have led to a modest increase in tax revenues.

VAT is The Worst Tax Of All, any cut is to be welcomed - but they can't reduce it to less than 15% because the EU say so.

VAT is indeed a rubbish tax, but in the absence of full-scale tax reform the government should bite the bullet and whack it straight up to 20%. Why pussy-foot around when you know it is going to get there eventually whatever happens?

What's happened to the comment facility on the Retailers/VAT thread or is it just me? I was going to say that, from what I read at the time, they're lucky it isn't going up 2.5% to compensate - ie to 20%.

Hey there thanks for showing me this. I must say that your blogpost was the most enjoying read I've seen in a long time. Greetings from personal trainer berlin
http://www.3gathome.com |

I have no words to appreciate this post ..... I'm really impressed with this post .... the person who created this post was a big thank you man .. for sharing with us.
les-graphiquants |

Pretty portion of content. I just stumbled upon your weblog and in accession capital to assert that I acquire in fact enjoyed account your weblog posts. Any way I will be subscribing on your augment or even I achievement you get admission to constantly quickly.
http://www.rasensport.org |