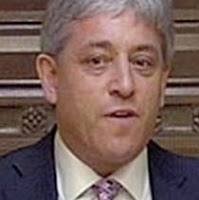 They're changing guard at Westminster Palace
Bercow’s taken the poisoned chalice
The bumptious git had better beware
“If he crosses Dave, he hasn’t a prayer”
Says Malice

Email ThisBlogThis!Share to TwitterShare to FacebookShare to Pinterest
Labels: doggerel

'Pooh Corner' was actually the big bend near the old gasworks between Hastings and Bexhill.

It's been redeveloped now, thankfully, but I feel you ought to know...

Who the Smokie is Malice?

p.s. a couple more syllables and it would fit.

Outstanding. From the pencil of the EJ Thribb of the blogosphere.

STB - it's not a bloody limmerick !

Where is the Eastern Association when you need them?

Solitude - from Now We Are Six

... there are many mansions

"no one says anything/no one but me" isn't always a good thing, eh, Idle ? but then again, "too many people/no one can be" isn't either

a wise chap (but uneducated - a soldier of course), whose daily life depended on getting it right, once told me:

the business of life is to avoid lumping people into so few categories that we fail to do justice to them, (no one says anything?)

... but at the same time, not to create so many categories (too many people?) as to lose the benefits of similarities

There was a young fella called John
Whose life had not been very much fun
He shouted Eureka when he became speaker
Then sold nudie pics to The Sun!!

I am so relevant these days... oh yeah!