They all confess in the end.. 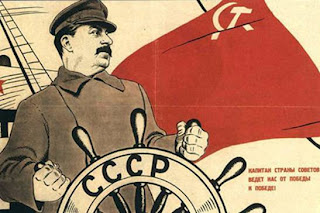 Following the murder of the Leningrad Party Secretary, and Stalin's rival, Sergei Kirov in 1934, an assassination almost certainly ordered by Stalin himself, the Moscow trials took place. At the trials old Bolshevik veterans confessed to the world their most conspiratorial crimes against the state that they had helped to create. Krestinsky held out, the only accused to do so. he denied he was a traitor, or a Trotskyite, or that he had committed any crime at all. He was led away and brought back to the trial the following day where he was asked again..

Krestinsky:{accused} Yesterday, under the influence of a momentary keen feeling of false shame, evoked by the atmosphere of the dock and the painful impression created by the public reading of the indictment, which was aggravated by my poor health, I could not bring myself to tell the truth, I could not bring myself to say that I was guilty. And instead of saying, "Yes, I am guilty," I almost mechanically answered, "No, I am not guilty."
Vyshinsky:{judge} Mechanically?
Krestinsky: In the face of world public opinion, I had not the strength to admit the truth that I had been conducting a Trotskyite struggle all along. I request the Court to register my statement that I fully and completely admit that I am guilty of all the gravest charges brought against me personally, and that I admit my complete responsibility for the treason and treachery I have committed.

Former Comrade Hazel Blears held out a little longer. But she too decided to confess today to the Manchester evening news.

The Salford MP wished she had not worn a brooch saying 'rocking the boat' the day after her shock decision to quit the Cabinet looked set to end the prime minister's reign.

And she bitterly regretted the timing of her resignation, on the eve of European elections, that saw Labour's vote dip under 16 per cent for the first time in nearly 100 years.

"I genuinely thought I could go without it sparking off this huge firestorm. In hindsight that judgement was wrong," she said."I should have waited until after the election. The effect on the party is something I will live with forever."

The Rocking The Boat brooch, seen as a not-very-subtle message to Mr Brown, was a gift from her husband.

"It was a stupid thing to do but I think it was just trying to put a brave face on - not going out cowed on the basis of expenses claims that genuinely are not true," Mrs Blears said.

Kretinsky was innocent of anything except being a communist and a threat to Stalin's future power. He was only trying to save his and his families lives. Hazel was suddenly made aware she could be deselected and have to answer some uncomfortable questions about capital gains tax and tax evasion.

Krestinsky was shot. Hazel was only shot to ribbons.

Stalin took personal charge of the investigation into Kirov's murder. Everyone connected with the killing, including many of their families, were shot or suddenly and surprisingly ceased to continue living or just disappeared. Has anyone seen Jacqui Smith recently? And will there be any more 'spontaneous displays of remorse' from the other failed plotters?

interestingly, what Stalin's chaps used to threaten these show-trial johnnies with (along with wiping out their families, natch) was total disappearance forever, with no trace and no mention

human beings can't stand that prospect. Any form of closure, even pleading guilty to trumped-up charges with a bullet to the brain thereafter, is preferable - provided the record shows what happened

I must say, that was the first thing that occurred to me - why on earth would she 'confess' now? She ought to tell them all to f*** off and get a job at Tesco's or something for which she is properly qualified.

Obviously not shelf-stacking, as she'd only be able to to the bottom shelves.

I ruined my own punchline there. I meant to say "only be able to DO the bottom shelves".

The confessions are pouring out already. Miliband tomorrow. And the ringleader Purnell had claimed he only wants be left in peace.
He will be allowed to go on holiday. Maybe to Mexico City. Sadly, whilst trying to refill the ice bucket from the machine, an ice pick will become embedded in his head.

Its all going to get a bit Godfather.

Don Brown will soon be coming back from a Christening to sit down with David Miliband, slowly telling him..

"Blairzini is dead. So is Caroline Tattallgia. Moe Blears. Smith. Purnell. Today I settled all party business so don't tell me that you're innocent. Admit what you did....Don't be afraid, David. Come on, you think I'd make my Foreign Secretary unemployed? I'm Godfather to your brother,too. Only don't tell me that you're innocent. Because it insults my intelligence and it makes me VERY ANGRY. Now, who approached you first? Clarke or Field?"

And the new cabinet rush to kiss Gordon's ring as Lord Mandelson closes the doors.

I cannot wait to see Caroline Flint recant - what will they threaten her with ??

What is terrifying is the way that they suddenly realise that outside of 'The Party' they are NOTHING.

They talk about a leadership challenge, but there isn't going to be one - EVER. Because, as Bill Quango MP puts it, if they step out of line a minuscule fraction, they will be 'disappeared' from the record and will become non-persons.


Just look at James, er, what was his name again ?

I believe the talk of another leadership plot is a Lord Mandelson invention. He will be circulating rumours to A} To encourage the suspected to declare loyalty.
B} to encourage the remaining failed plotters to show their hand.

I strongly suspect that the second plotting email to get signatures to topple the leader was also a Mandelson concoction.
A} It minimised the effect of the first letter. There were now two separate plots requiring MPs to add their names too halving the original effect.
B} MPs were exposed to the Whipstapo when they added their name to the fake letter, so also exposing the plot and plotters.
It pays to have a brilliant schemer on your team.

Harman is on the radio now saying there is no plot at all and Mandy is wrong. Oh dear. The poor old girl had better never go up against Lord Mandleson. He could plot her destruction during breakfast while buttering his toast and reading Horse and Hound.

Wonderfulforhisage.
An incredible number of party loyalists went to the firing squads praising the party. Stalin couldn't give a stuff about the party. He was for Stalin. Reminds me of someone...

ND. Indeed. I hadn't seen the chipmunk on the news, on read the papers, but having seen her she looks she has just been released from the cells. Can almost the bruising around the eyes.

MW. Really made me laugh. That could well be the Sunday competition..what would be a suitable new job for Hazel Blears?

Dearime: its funny because its true.

Anons. Brown has already forgotten the plotters. They will be airbrushed from the cabinet photographs.
He has forgotten their titles, their roles, their contributions.. their very names.
Forgotten..but never forgiven.

y'know, I actually think the Chipmunk is still ambitious

it's all positioning; every one of them knows a mighty ruction will befall, no later than a year from now

Splendidly instructive and frightfully disturbing article. Chairman Gordon Sergeyevich Broon may act, think, speak and behave as a ridiculous, stupid fool, but he has through long Scotch Labour experience procured much dexterity in lies, devilish schemes and personal violence.

Are you seriously suggesting that Comrade Blears is married? It's the first I've heard of it. I hope there are no children.
Don't they 'off' the families in these kind of cases?

Has that 13K been cashed yet

if it has, Irina, it can only be as a tax credit to Ms Blears' HMRC account: there was no tax payable