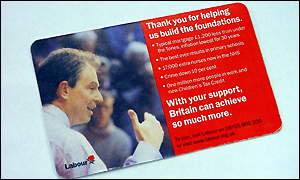 A debate over at Letters from a Tory has begun to spiral into a Cameron should promise more row. Issues such as a full NHS debate, War debate etc. Some see that is the way to power.

Labour was very big on pledges when it was preparing to fight the election in 1996.
Despite the myth that Tony Blair never said anything of substance before the election, Labour made some very specific, very measurable promises and committed them to pledge cards. This was seen as quite an astute move. Committing the party to areas that people wanted to see action on. It was actually much later, when they couldn't deliver, that they changed to Mission Statement style pledges.

The problem for Labour was these were not just easily broken manifesto promises, but pledge cards that were issued to people, in order to deliberately hold the government to account after its first term. The pledge cards HAD to be met, or made to appear the pledges had been met. So the pledge cards, really intended to be 'trust us' cards - another arrow in the attack on the dishonest Tory liars -had a large policy influence, despite changing circumstances or priorities. By 2001 Tony Blair decided to ditch old Labour style commitments for a more New Labour sounding aspiration, with broader,easier targets. Also a rolling of 2 policies into one statement, to make a claim of success easier {though conversely, harder too}

2001
Just love number one there. How would mortgages be kept low with an independent Bank of England? Well Gordon found a way. Oh yes. and the golden rules were his own rules. Enron accounting can meet any commitment, in the short term.

By 2005, with lots of failures on display in Health care, Policing, Teaching, Public spending and taxation, the most bland, innocuous, unquantifiable pledges, released only because they had been done before and to escape the charge of abandonment appeared without fanfare.

1. Your family better off
2. Your family treated better and faster
3. Your child achieving more
4. Your country's borders protected
5. Your community safer
6. Your children with the best start

Just awful! And they added an extra sixth, even more pointless pledge too! And number one looks unlikely to be met by 2010. Or even 2020. But with no timescale watch GB spin it away as a success if he's ever asked.
But what five pledges should Cameron make?
Even more ephemeral ones than Blair's 2005 ? Or more substantial ones like the executive's 1997?

1. Withdraw from the EU - trade with the rest of the EU under WTO rules. No 'compensation' payments to the EU.

2. An over turning of the "snooper state" and a re-invigoration of the concept that an 'Englishman is born free'.

4. A bonfire of ALL the Quangoes: we elect MPs and Councillors - let them do what work is really needed.

5. All expenses and bonuses for MPs and MEPs to be paid for directly from Party funds, not the general taxpayer.

1. Run a budget surplus every year that the economy grows.

2. Cut the national debt by 20% over the course over five years.

3. Devolve all state services apart from defence and the judiciary to local control.

4. Repeal of much of the anti-privacy and anti-freedom legislation introduced since 1997.

"We will honestly try and sort all the sh!t Gordon leaves behind as quickly as possible - inspite of the forthcoming double digit inflation, continuing unemployment and woeful public finances which, taken together, will make the task virtually impossible. But don't hold your breath. Oh yeah - and bugger off if you voted for Labour at anytime in the last 13 years cos that means its ultimately your fault in the first place".

Issue a pladge card along the lines of:

"Please vote labour. Let them sort out their own mess".

1. to smack Gordon Brown in the mouth next time he says public spending will not be cut.

2. to smack Alistair Darling in the mouth next time he talks of a strong recovery in 2010.

3. to smack that toupee wearing nitwit in the mouth next time he says the troops have all the equipment and helicopters they need.

1} Timetable for withdrawal from Afghanistan. Just our frontline troops. Our support services can stay as part of Nato.

4} Set salaries for MPs. receipted Travel and office expenses only. No second homes.

Hmm..
I think these maybe the New Labour style ones.

Get Dave to counteract with pledges to

1. Restore the former punishment for treason to that in force prior to New Labour regime taking power.

2. Immediately arrest parliamentary members of the Labour party and put them on trial for treason.

3. Apply the same treatment to collaborators with the New Labour regime.

4. Do whatever is possible to help the people whose lives have been destroyed by their actions.

5. Cameron to make a public apology for giving B’Liar a standing ovation at his last PMQs and for not doing more to rid us of this evil government.

Marchamont Needham said...
This comment has been removed by the author.
11:47 pm

I still say the big issue is the EU membership and needs resolution.