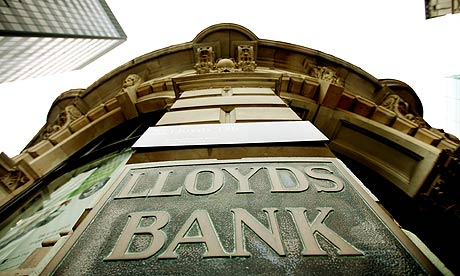 Reports abound this morning that Alistair Darling is looking to allow Lloyds Banking Group to escape the clutches of the Government Asset Protection Scheme. Well, after all the leaking and discussions recently this is not a great surprise.

However, Lloyds will have to raise £25 billion to do this and the Government will have to be in for over £11 billion to make this happen. Ouch. That is a lot more taxpayer money being sent out to a risky banking institution. So why do it?
Well, if Lloyds does not pass £250 billion of bad debts to the Government then the UK exposure is just with RBS and this is a much more palatable number for the treasury. However, that assumes that the debts will default at a high rate. To reach £11 billion equates to a default rate of near 5%.
However, if Lloyds is faced with the same default rate or higher then the bank won't make it. Particularly if the European Commission make it sell of profitable retail arms and keep the huge loss-making loan books of HBOS.
Oh dear, that is the plan. When the markets figure this out then Lloyds shares will be panned once more and instability will return to the markets.
This is a no-win scenario for the Government, but the APS is at least designed to underpin the banking system. The new plan introduces some big risks into the market just at a time of fragility. It could not be more badly timed.
Posted by CityUnslicker

So the government (and opposition) keep telling us the banks have to lend more, but accoridng to your Forbes link RBS is targeting a 40% balance sheet reduction and the EU are telling other banks 45%.

The markets don't seem to agree with you yet though, and Lloyds are up over 3p this morning. I read some alternative spin about them asking their investors whether they can stomach share price falls.

I will lend LTSBHBOS a few quid if they offer me a decent interest rate.

rights issue will be 1 4 1 - so 60p share price here we come. Short Lloyds and buy the nil paid rights when this plays out.

BE - ING Direct, can't go wrong with that one, always the best rate.

What is a nil paid rights issue? Will this show up as something seperate on my cfd account then?

Well yes and no, but part of the plan was to swap £10 billion of debt for equity, which is the key to all this.

Even more depressing is NR, which they are doing half right - of the £25 billion taxpayer loan, about half appears to have been repaid already, and the plan appears to be that the 'bad bank' will be owned by bond holders 9so that's another kind of debt-for-equity swap).

But they stil want to bung it another £8 billion taxpayers' finest as part 94 of their desperate attempt to shore up house prices (which to my great chagrin, appears to be working).

That's Home-Owner-ism for you - you can take as much money off people as you like as long as you use it to prop up house prices. See e.g. plans to increase VAT again but to "freeze" Council Tax.

What amazes me is that there is this news and then the Telegraph says today that the recession is over and all is well. Whom to believe?

Plan? Plan? A drunken sailor let loose at a dog track with the mess funds could do better.

It is obvious that the claimed "end of recession/depression" in the US is based on entirely false statistics, and is unsustainable going forward.

The $ was raised temporarily to aid the sales of gov't debt, coincident with a bear trap, aided by GS opinions on GDP the previous evening.

Overnight in Asia the $ index once again fell below 76, and is again rising with the London opening.

US lawmakers refuse to regulate OTC derivatives, censoring evidence by objectors to the current non-legislation hearings, leaving (by implication) the world, more precarious now, than it was prior to the meltdown.

International capital flows are now set to greatly inhibit the abilities of G7 central banks to use debt to ressurrect their own economies, and at the same time create greater asset bubbles in the economies that raise interest rates before the zombie G7 economies.

When one looks at table 19 one sees incredible derivative figures.

Where a national currency is adopted as a global reserve currency, the global liquidity requirements more or less demand incredible deficit financing by that nation. This results in the prodigious levels of derivatives, as an effort on the part of that nation to (failingly) keep the currency strong, to perpetuate a false demand for bonds, (their being embedded in interest-rate swaps, for eg) keeping interest rates low, and hide from its own electorate the effects on their own purchasing power. This apparent "cheating", coupled with global aggressive militarism, has resulted in many nations, and many evolving methods, of diluting the global hegemony of that nation.

A period of financial, economic, and military turbulence is dawning.