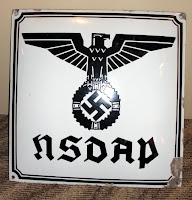 Almost universally Nick Griffin's Question time debut has been seen as dire. Even though it was a most unusual setting, with a hostile audience and the major topics of the day ignored in favour of highlighting BNP policy and racism, he failed to elicit much sympathy. He missed the opportunities to present his views rationally, possibly because they aren't rational, and missed basic political points. He should have had better advice and better preparation. Jack Straw floundered on immigration. as did the other major parties. Jack Straw insists the veil is removed in his surgeries. A stick for Mr Griffin to beat him with that he failed to grasp. British jobs for British workers, fear of crime,the immigration stats from the ONS just released, all help the BNP. He must have known the event would be stacked against him. The majority of the country is against him after all. Regardless he was poor and the decision to let him speak seems justified. The longer he spoke the less he said and the more awkward and foolish he was.
Hitler could have presented his case better.

First question, The gentleman in the top hat.
"Does the panel think that we should have closer ties with Europe?"

Absolubtely. I fully believe that we should have a single currency, a single administrative system, and a single trading area. A single transport policy and a single representative body. I fully support closer European unity." {Applause from the audience} And if great Britain and the Commonwealth doesn't want to join? "Then we will bomb you into dust!" {smattering of uncertain applause}

Next question. From a Mrs Trellis. Should this country still be engaged in a police action in the middle East. Field Marshall?

Erm, well I can't say anything political, but our Armstrong Whitby tri-planes should have been withdrawn in 1920. Our 1903 Lee enfields are getting on a bit and their isn't enough head armour for evey soldier. Some still just have forage caps instead of tin helmets.

Its an outrage. The armed forces are being denied the equipment they need.
{Applause} This feeble recession hit government spends money on immigrants, claiming to flee oppression in,erm,Germany and Austria, yet they cannot support their own troops. I would spend {voice rises} Three -Four - five -five hundred - five thousand times on armaments. I would provide work for our national socialist brothers in the Panzer and Messerschmidt factories by making our armed forces the best in the world. {Applause}

Another question. gentleman in the flat cap..no not you..the grubby one..looks a bit working class. Yes!

Lady Helena Ashcroft-Osbourne-Reynard? What would you say?

Well I think that the global recession from the Wall street crash, that started in America remember, has caused a few social problems that this government , with its Labour exchanges and soup kitchens is dealing with.."

Hitler {interrupts} Nein! Garbage. You have allowed youths to drift into unemployment and become anti social. You are to blame.{claps} I would put another 100,000 Brown uniformed special constables onto the streets to keep order.{Applause}. I would make sure that offenders are removed from society to special camps where they will learn proper discipline and respect. Those that don't have jobs can go into the army! We will provide training,food, shelter,skills , a real future and discipline! {Applause}. We will stop crime and the causes of crime. Extra police is what's needed. Not just my 100,000 'Brown shirted' special constables but if a crime is reported a detective from the Gestapo will arrive to investigate the reported crimes. Identity cards will be introduced to combat terrorism. CCTV cameras will observe the trouble makers. A period of 42 days detention without trial will be introduced to deal with the worst troublemakers. Lady Helena Ashcroft-Osbourne-Reynard claims to represent Hardworkingfamilies. She does not. She does not give them jobs. The national Socialists will give them jobs. British Jobs. British jobs for British workers! This is the future, this is what is needed. short term pain for long term gain. The future is being built now. Tomorrow belongs to us! TO US!

Just watch the polls though...

I've heard that before somewhere.

Bill - you saw it, I didn't and I'm relying on your and others' comments today.

It comes across very strongly that the others, particularly the left, were shown up for being as bad as Griffin. Straw and Dimbleby seemed to have been the worst.

It might not have much effect at the polls but it surely sunk the lefties even more.

JPT: We shall see. I wasn't swayed at all. The BBC should have at least played a straight game though. Or let Griffin have have an easy first over. And some pads. And a helmet. And a cricket bat. And bowl a ball instead of a grenade.
He wouldn't have been any better.

anon. Yes. I've heard that before somewhere too.

JH. Get a telly! You'll miss children in need!
It wasn't that the panel was bad, just that they couldn't answer immigration with anything other than 'its the right thing to do.'

The BNP didn't have any answers either.You could imagine them trying to draw up Nuremberg rules to decide who is British and who is foreign.

That really annoyed me, these people saying "Would the BBC invite Hitler to QT?"

As it happens, poor old Neville C was still meeting with and negotiating with Hitler right up to the bitter end. Now, I don't think that QT invites foreign politicos onto the show, but the question is meaningless unless you add which year you mean.

Up to 1936 (Berlin Olympics etc) I suspect Hitler was just another foreign leader. From 1938 onwards he'd have been a persona non grata, of course.

I'm with JH - indeed I dont have a TV either - but looking at the aftermath of reporting it appears even with media overdrive each side walks away congratulating itself on how clever they are.

Personally I spent the half program laughing!

And he revealed his lack of diplomacy at the very end when he insulted his hosts - just not "the done thing" for an "Englishman" :) should have been stiff upper lip and "thank you for the iced water"

MW: Yes. Mussolini was a firm favourite with the west up to the Czech crisis. Hitler's Nuremberg laws damaged him in the democracies.
That and being a madman.

Hovis. The BNP got a lot of extra coverage today after playing the injured card. BBC are in total denial that they did anything any different from usual. They should have left the format alone.

Timbo614.
Welcome. Sorry i don't agree. On Thursday mornings we often play guess the QT questions. Its pretty easy to get 4 out of 8 on any regular program. I wouldn't have expected endless BNP specific questions.
The audience picks the questions but there are a couple of hundred audience members to choose from. The BBC picks the final 10 or so from the many many offered.
If you recall at one point a member of the audience had a question that began "Dick Griffin..Sorry I mean Nick Griffin."
It passed without comment, but a titter, from Dimby. Amusing-ish it may have been but I can't recall the chairman allowing others to insult the panel. Jacqui Slit, Mong Campbell, Harriett Hardon, or even a Willy Hague. It was just symptomatic of the pantomime nature of the program, so it was not normal.Not at all.

I think it was a mistake by the Beeb. Iain Dale said as much before the recording.
It gives the man sympathy. This comment has ended up defending him, and I think him to be an out of depth, bigoted, ill informed racist of the far left/right.

Not Mrs Trellis of North Wales? She certainly gets around.

Great Post, now do more please of ukrania versus the Big Bear

BQ, I don't think Griffin will get much sympathy. I'm as right wing as the next chap, but he just came across as an unintelligent pig-ignorant scumbag. Verrrry shifty.

There are a pair of Griffins guarding The City.