Unemployment no worse for now. 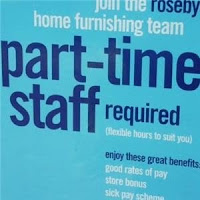 Unemployment was not as bad as feared at 2.47 million {7.9%) and youth unemployment remained below 1 million. Reported in the news as good news by Yvette Cooper, as it shows economic growth, it still means 88,000 extra claimants in the last 3 months.
The forecast was only for 2.5 million so its still pretty bad.

But visiting many ,many shopping centres and high streets I was very surprised to note that maybe 40% of stores and food outlets had vacancy signs on them. A mix of full and part-time jobs.
This sudden retail optimism for Christmas must have helped hold down the unemployment figures and will continue to do so until mid January.

Once the busy trading period is over, the end of the VAT cut admin/ticketing nightmare is out of the way and the incredible rise in business rates that are due to fall in april, as is the increased cost of employment with a rise in N.I. contributions, expect a very high % rise in unemployment figures, even against the seasonal norm.
Only a very good final quarter trading can prevent that, and that means real profits instead of the reports of boom sales against soft trading 2008 figures that will dominate the media at Christmas.

As Alan Tomlinson of the insolvency practitioners Tomlinsons said the worst was not over.

"Unemployment will continue to rise as long as businesses continue to struggle, and a significant number of businesses, small and medium enterprises in particular, are still fighting to survive," he said.

"Turnover is depressed, cash flow is uncertain and margins are squeezed and so in order to stay afloat companies are having to make economies, the first of which, unfortunately, is to reduce head count."

The figures hide this, though

Bill, all that means is that the growth in it has slowed. It's still growing though.

Well the pound is down against the Euro and the dollar so that's supposed to be good for exports. Can't see that is going to benefit us much if the balance of export/import is tilted towards import. And it must be. We import cheap clothes and manufacturing largely assembles now doesn't it? How much of manufacturing is created from scratch here? Not much, if anything. Even farming is having a hard time.

I don't see how the Tories plan or getting people back to work will succeed if:

a) there are no jobs as Alan Tomlinson pointed out.

b) EU regulation strangles business and the city.

Just what is "The Economy"?
I think it is, as are most things, a figment of some poor fevered imagination.
Basically we have wealth creators, and those who life off their backs. What is this economy thing?

I think you are right about the retail sector and part time jobs hiding unemployment at the moment. As far as I can see the idea of a 'recovery' is based on a return to cheap and easy credit... isn't that what started all this in the first place? Also - a high percentage of the population is uncreditworthy having never paid the old loans or being unemployed etc.

Part time everywhere Elby. That's part of what the looming postal strike is about. Full time work but on part- time contracts.

JH: A long while back we made a joke that mandy would say "Things are really looking up now" and if questioned on this he would say "well things are getting worse a lot less quickly than before."
Little did we think this would become a standard answer.

Philipa: Happy birthday!
The hole in the finances has to be filled. Those of us who remember the Thatcher years will remember what happens. Everyone suffers. Business has to pay more to support those without jobs, that creates less jobs, that means more taxes to support the unemployed that --- etc.

Mutleythedog.
Welcome back!
Digby Jones said today that the recession is over. Many people think this. Not that that means we are going to return to real growth anytime soon. See response to JH above.