White Elephants on the Road to Recovery 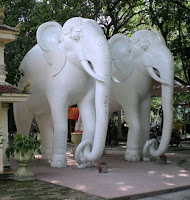 The paper Road to Recovery published today by Reform (“an independent, non-party think tank whose mission is to set out a better way blah blah”) makes some vital points that chime with much of what we bang on about at C@W.

Their theme is infrastructure of the steel-and-concrete (and cables) varieties; how it gets built and how very bad we are at it in the UK. In particular, they inveigh against picking winners by government (Mandy and Miliband.E, this means you), money wasted on white elephant projects, and general government interference – particularly in rail, roads and renewables.

So we’re all on the same page.

As an empiricist I like their fund of historical examples of good and bad decision-making (not sure Sizewell C should be in the Good list, though). I like their ‘5 Principles’ and good-&-bad industries list; and I quite like their proposed road to recovery. Have a read: it’s not easily summarized but the paper itself isn’t long.

What can be readily identified is the source of their striking optimism, captured in an assertion - “the impossibility [for the next decade] of big public spending” - and a rousing slogan for the future:

Hmm. You’d like to think so, but impossible is a strong word when governments are concerned, and there are quite a few Tory white elephants on the horizon.

Mr Clark, there are several months till the election. Spend the time wisely, & give the Reform paper a read.

Would it were so.

It ought to be, but sadly (and being empirical about it) it isn't.

In theory, if I tell you your budget is cut by 10% you ought to look around and cut 10% that is waste (there will almost certainly be this much and more). In practice you will be so focussed on the 10% (this is the problem with all targets) that you just cut anything (if you're really unlucky this will include a vital part of your business and you will go bust) to get expenditure down.

Infrastructure might not be a sexy topic, but in terms of economic recovery and long-term prosperity it's essential we get it right. I seriously hope the Conservatives are not in this debate for a quick win.

welcome Sir Watkin, and I fear you are often correct

the best results come when savings & efficiencies are made for their own sake (i.e. by someone or some process that is spontaneously on the lookout for them, for the intrinsic benefits they bring) as opposed to randomly, by external fiat

LFAT - yes indeed - & interestingly Goldman Sachs' analysis of the problems in commodities markets (which they seem to understand MUCH better than anyone else), that have led to such damagingly spiky & volatile prices, are more to do with deficient infrastructure worldwide than absolute shortages of the commodities themselves

Some countries seem to manage infrastructure much better than the UK does. The Koreans, for example, have managed to foster universal broadband at much higher speeds than "Digital Britain" even aspires to. The Germans have much better roads and trains than we do.

Are the British just no good at "management"?

Whats wrong with 5GW coal? I thought you believed in coal?

Sizewell C on the Good list: Hmmm, makes you wonder about the quality of the rest of the report when the source they cite to support "cost effectiveness" says "[This] analysis is economic rather than financial and, as such, cannot be used as a basis for determining likely commercial appetite for bringing forward nuclear projects." Moreover the cite uses the usual averaging of other reports, some very optimistic (especially on discount rates for finance) from lobby groups, and between 4 to 7 years old, to justify the economic analysis.

It's always worrying when something you know about looks shoddy - you wonder about the rest.

We instituted a scheme whereby anyone who identified a feasible *real* cost saving, which didn't harm the business, got a cash reward. Typically this would be 5 % of the value of the saving. It worked, I tell you. Though naturally we didn't pay the cash up front, that happened at the end of the year.

Are the British just no good at "management"? - no, it's just that the world owes us a living, BE !

I don't believe in any of the alternatives, anon, I just want to see them developed without subsidies / ministerial favouritism

yes, Mr Endland, I have me doubts - but the others on their list were instructive

life in the old suggstions box yet, SW! The folks at the coalface often know where the gold lies. (I was talking to my dry cleaner recently and he clearly knows how his shop could make really huge energy savings - it's amazing there is still so much scope but there is

ND: Perhaps the report, under the “Tight money = better decisions” theme, should have looked to nuclear plant life extension as the "good" idea.

I've long thought this is where the profit in nuclear is to be found in the near term. Sadly UK AGRs, with dodgy graphite cores, don't have that much extension milage compared to PWRs in the rest of the world. From what I've seen 50 or even 60 years from a PWR seems possible.

Looks like German politicans are looking for a deal with E.on, RWE and EnBW on life extension, with some of the profits going to other things (wind?). I susect a lot of the Green community may come around to thinking nuc life extension is a good idea, if done properly with appropriate safety updates in the plants. It is both economic and carbon reducing, unlike new nucs and coal.

If EDF could somehow escape having to order new nucs to prop up Areva, life extensions on French PWRs could bring EDF a lot of profit.

Mr E, it's a v good question, I am not technically qualified to judge the potential

but I do know the German co's have been (quietly) betting on extension for several years and have presumably, over this time, done what it takes to ensure it will work, avoiding the LCPD-type 'self-fulfilling prophesy' effect

if it does work, it really changes the capacity margins in Germany, of course, obviating the need for a swath of gas plants & making gas all the more plentiful - which is why I'm ever more convinced there will be another UK dash-for-gas (unless the Tories are less fixated than NuLab on mandatory CCS)

I'm really looking forward to the politics of this ! there is a whole generation of German green-lib-lefties whose greatest achievement was Atomwerke - nein danke, it's a religion with them and they are now reaching retirement age ... with all the time in the world to reprise the protests of their youth

(incidentally, the new regulations in France, giving new power-marketing entrants the right to buy EDF nuc power on reasonable terms, has snuffed out a handful of projected CCGTs in France. If EDF can extend on a large scale ... even more gas available !)

German extension hopes had a bit of a knock with the discovery of large metal shavings in the Krümmel primary coolant a few months ago. Possibly from SCRAMs due to non-nuclear electricity systems failing.

Also the discovery in the U.S. of that Davis-Besse pressure vessel head which had almost corroded right through was quite a fright, and suggests very inadequate safety inspections. (BTW EDF replaced 54 vessel heads as a preventative measure following this - reassuringly the EDF engineering approach seems quite good.)

So it's not a no-brainer, and you are right about the Atomwerke - nein danke politics playing out (which incidentally I think was broadly right from an economic standpoint, but now they are sunk costs ...).

Extensions mustn't be done on the cheap, or something will go wrong. It probably needs a lot of equipment renewal somewhere between 30 and 40 years, and a much more rigorous external inspection regime to prevent self-interested sloppiness (remember the banks!).

But it still seems sensible in many cases, though it is pushing the boat out a bit with aging materials properties. Luckily with PWRs it seems possible to replace quite a lot of reactor stuff reasonably easily, unlike our AGRs.