The Very Definition of Self-Serving 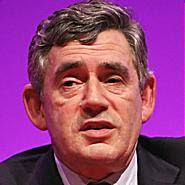 Brown added: "One of the frustrations for me was the lack of a global body with the sole responsibility for environmental stewardship. I believe that in 2010 we will need to look at reforming our international institutions to meet the common challenges we face as an international community."

That would be, err, around July 2010 ? And it would need a very powerful General Secretary ? With enormous powers and budget ?

Is anyone running a book on just what he will do after the election? I'd give it a go:

2/1 on staying Labour leader? You've got to be having a laugh!

Can you imagine that pathological spendaholic i/c the IMF? The mind boggles. Let's hope the useless shameless f***er sinks without trace.

New global institution at 12:1 looks fair. Some kind of World climate czar with a billion billion billion $ budget.
Something for the history books to view alongside the groundnut scheme.

Got it in one, Nick.

Is El Gordon Bhrams and List, I think we should be told.

The French won't have him will they?

Hm, He's evidently lobbying for something. I hope he stays employed, however. Suddenly realising, half-way between courses, that he's the guest speaker at some industry event would be the final straw for the Mermaid. At least Hague haranguing the IMA was mildly amusing. Brown burbling his way through a City dinner would be unbearable.

Blair didn't get the EU job and Brown is tied very closely to Blair; why have Brown when Blair might be on offer.
Also the climate job doesn't seem a European's job so, apart from other disqualifications, not being Australian or more generally Pacific rim could rule him out.
Being Brown this won't be his only job-setting-up exercise. Spot the international and global institutions with funding proposals will be a casual pass time over the coming months. I do hope he gets something, otherwise he will try to stay with us.

Hatfield girl said: "... why have Brown when Blair might be on offer?"

Because Bliar will be in prison? (Just hoping).

The problem with Brown is he is totally deluded: he thinks he is good but no one else does. No one but a quango/the EU/ the UN/ will give him a job, therefore.

Really Letter's? I can well imagine him deciding to stay put and deride the tories from the opposition benches for falling into all the traps he thinks he's set.

In fact I can't really imagine him ever leaving.

Frankly,I hope he is 6 feet under in an anonymous piece of a labour council's wasteland.

More a case of the "Known Soviet Spy".

Nastiest piece of crap ever to enter politics.