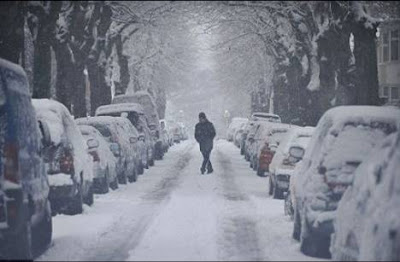 Like for like sales fell by 0.7% on the previous year {rise of 1.1%} reports KPMG BRC retail.
The cause was primarily the weather which shut down the tail end of the January sales and ended an latent desire for consumerism.

Even food, which had a bumper start to January with panic buying, fell away once the heavy snow came. Clothing and footwear made a partial recovery, people finding that summer shoes and T/shirts are far from ideal winterwear but understandably homewares and furniture were poor. The figures are also inflated in £ terms by being a 17.5% set vs a 15% VAT last year, which appears to show higher sales, but actually only shows higher tax.

The news that online sales were significantly up was a slight surprise. There was expectation that online bargains and wished for items that hadn't appeared in the stockings would drive sales.
What was a surprise was that Royal Mail was very badly affected by the snow. Much more so than during the recent strikes. Guarantees were suspended for days on end and mail backed up in depots, in stranded lorries and undelivered in mail centres. That must have put a dent into those figures that could have been even better. Maybe CU, currently in Moscow, could see how the Russians manager to deliver mail at -20* ?

The Telegraph is one paper using the figures to ponder whether a double-dip is now much more likely. That may well be the case but it would foolish to consider these figures without allowing for the exceptional weather effects that led to them.
Posted by Bill Quango MP

Most Russians don't bother with the post, I hear.

you can't even think at -20, it's like being hit on the head

when I was in the Army we were told that the Russians had very simple drills and tactics because (a) they spoke all manner of different languages, so giving complex instructions was difficult [true] and (b) their conscripts were poorly educated [mostly not true

first time I stepped out into a Moscow -20 morning I realised there was an even more basic reason for keeping things ultra-simple ...

Surely we have to wait for proper confirmation we are out of recession before talk about falling back into one?

True BE. Parcels to Russia have no compensation.

ND.. An old sailor used to complain at us work experience teenagers moaning about the cold. This was the cold snap of 1983. The old matelot showed us a picture of him at 18 yrs on the destroyer HMS Penn on the arctic convoys. The ice was so thick the ship was listing dangerously and all these RN lads were chipping it away from the lines before the thing turned over. Now that was cold.

Anon: we are out. Didn't you hear?
And the PM has already told us that o% growth is still growth.